This Panzanella with Pandesal is a Filipino twist on the Italian Panzanella Salad. Made with toasted Pandesal with creamy pieces of Kesong Puti and Malunggay Pesto. It’s summer on a plate.

First of what is Panzanella?

There is a misconception that it’s a tomato salad. Actually it’s a bread dish flavored with vegetables. Originally it was made with stale bread, onion and vinegar. Over time this Tuscan dish has evolved to heavily feature tomatoes. Which is what we are going to play with today.

From the title of this recipe (Panzanella with Pandesal) one of the key ingredients is Pandesal! You can make it from scratch using this recipe or of course buy it. The best place to buy Pandesal is from a Filipino bakery. Here are a few places I recommend in the San Francisco Bay Area.

Another component of Panzanella with Pandesal is Kesong Puti. Kesong Puti is a homemade white cheese, that is super easy to make from scratch. I do have a recipe for it here on my site. It’s very similar to ricotta, so if you are not up to making it from scratch it’s fine to replace it with ricotta or even burrata.

You can also buy it online from my friends at Marias Bulacan Sweets. They have sourced some water buffalo in New Jersey and they make it from scratch.

Another easy to make from scratch component is Malunggay Pesto. I like to make mine with cashews. My recipe uses fresh Malunggay leaves that gives it an awesome green color. Of course you can use other store bought pesto, but it won’t have malunggay!

To replace the vinegar I used some Cocomansi instead. It’s made with Coconut Aminos and Calamansi Juice. You can easily buy a bottle in the US. The company is called Saint C and available through several online stores. The calamansi gives it a nice touch of acid.

Of course the core of this Panzanella with Pandesal recipe are tomatoes. Which are great during the summer months. Pick the most vibrant and juicy ones!

Lettuce is something optional. Not necessary, if this is just going to be a side dish. However highly recommended if it’s going to be the main dish on the table.

How to Make Panzanella with Pandesal

Now that we have all our ingredients, let’s make the thing.

First thing you have to do is flavor and toast the Pandesal. You would need about 4 for this recipe. Rip each Pandesal into 4 pieces and place in a bowl. Drizzle some olive oil (about a tablespoon or so) and season with a teaspoon each of salt and pepper.

Toast in the oven at 350F for 10 minutes until nice and golden. Take out of the oven when done and leave too cool on the counter.

While the bread is toasting cut the tomatoes into wedges. Place them in a colander that has been set over a bowl. Sprinkle a tablespoon of salt over the tomatoes and leave to sit for 10 minutes until the juices have seeped out.

Take the bowl with the tomato juice and add in 2 tablespoons of cocomansi and 1/4 cup of olive oil. Stir well.

How to Serve Panzanella with Pandesal

To serve the Panzanella with Pandesal place the lettuce on a large plate and layer on top the tomatoes, toasted Pandesal, kesong puti, and malunggay pesto. Drizzle some of the dressing all over and leave the rest on the side. Have with a nice cold crisp glass of wine.

How to store Panzanella with Pandesal

It’s best to have it all the same day. If you do have left overs aim to eat it the next day at the least. 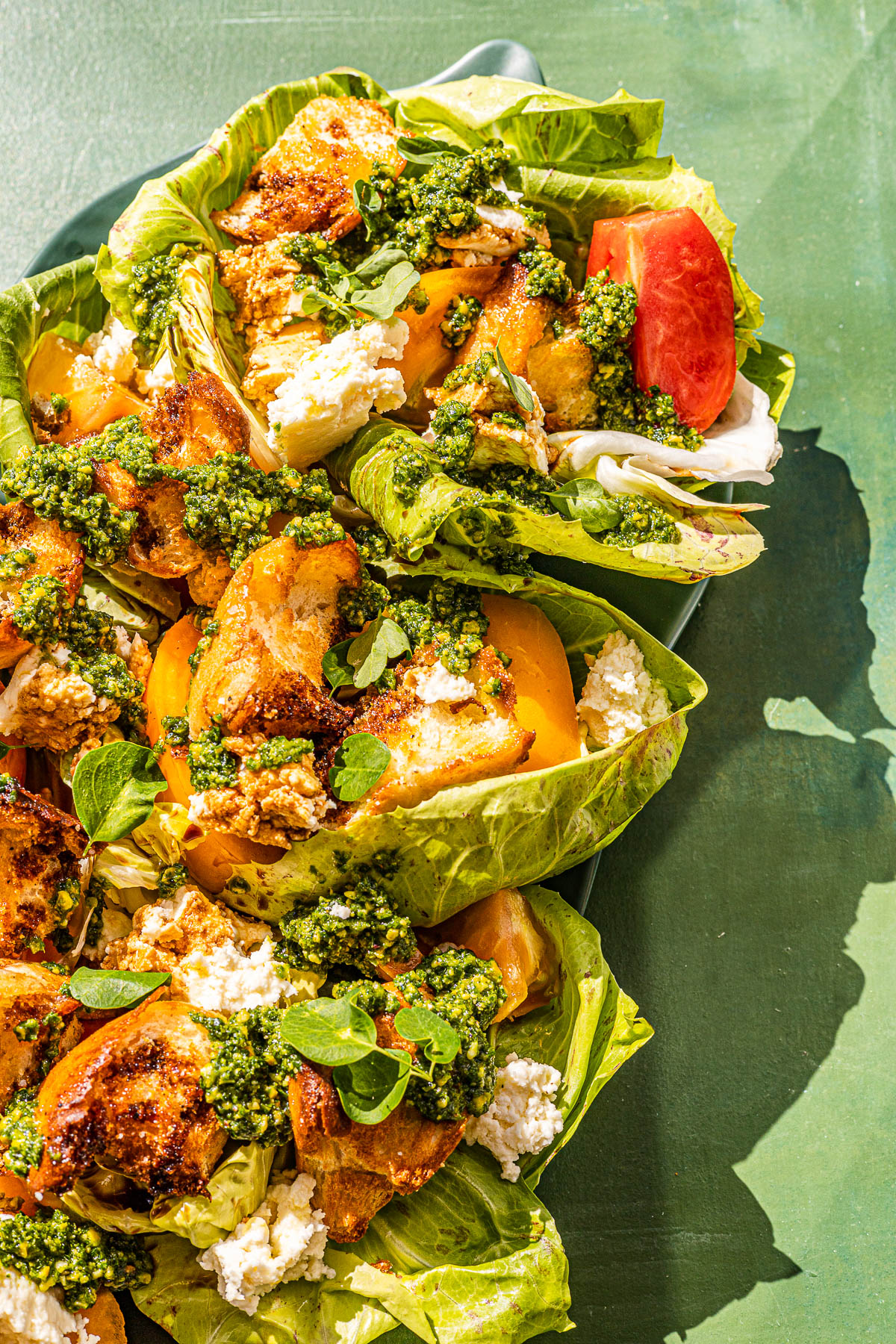