This Tortang Ginisang Upo at Giniling or in English Stir-fried Bottle Gourd with Vegan Grounds Frittata is a super quick meal to make during the weekday. With just a quick stir-fry of Upo and some vegan grounds with ginger and shallots, you can have a meal on the table in less than 30 minutes. 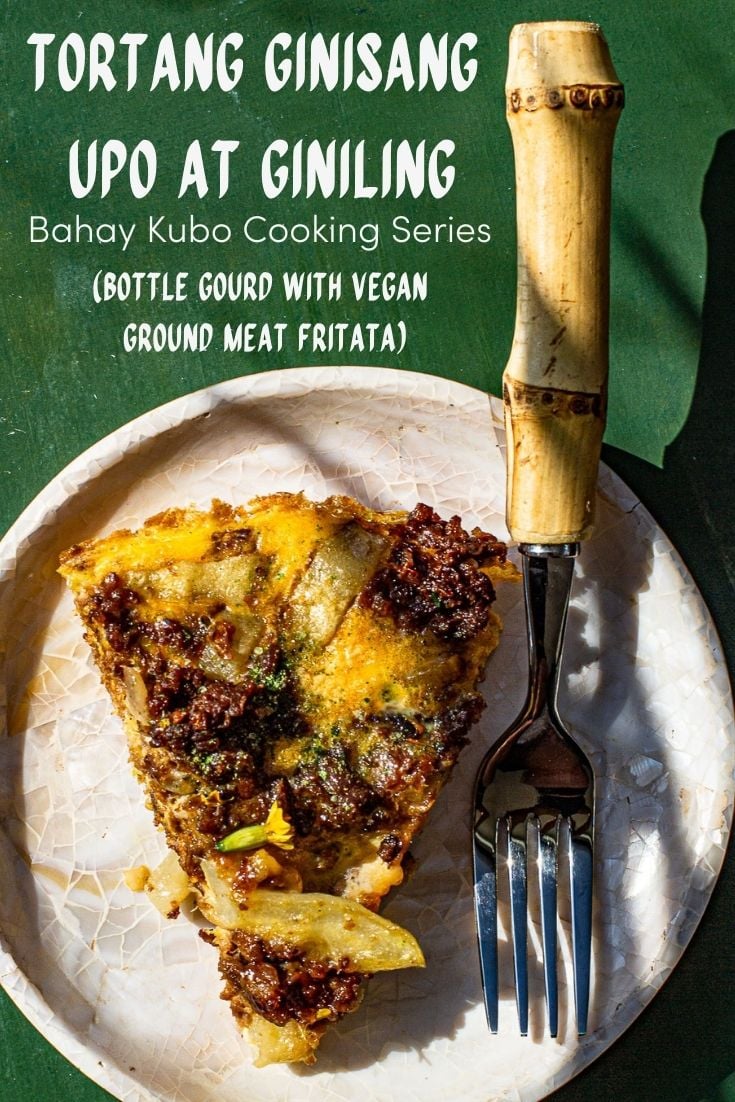 And we are back to the Bahay Kubo Cooking Series with a vegetable called Upo.  Upo or Bottle Gourd.  Interestingly Upo and other gourds are technically a fruit.  Much like grapes and melons they are fruit that grows on a vine.

Typically they are left on the vine to grow and harden to be used as vessels.  With Upo they are harvested young before the outer shell gets hard so it’s easier to peel and chop.

In the Philippines it’s cooked either just stir fried with some pork or added to a soup called misuwa.  In this recipe we are going to stir-fry it with some vegan grounds and then set it with some eggs to make a frittata. 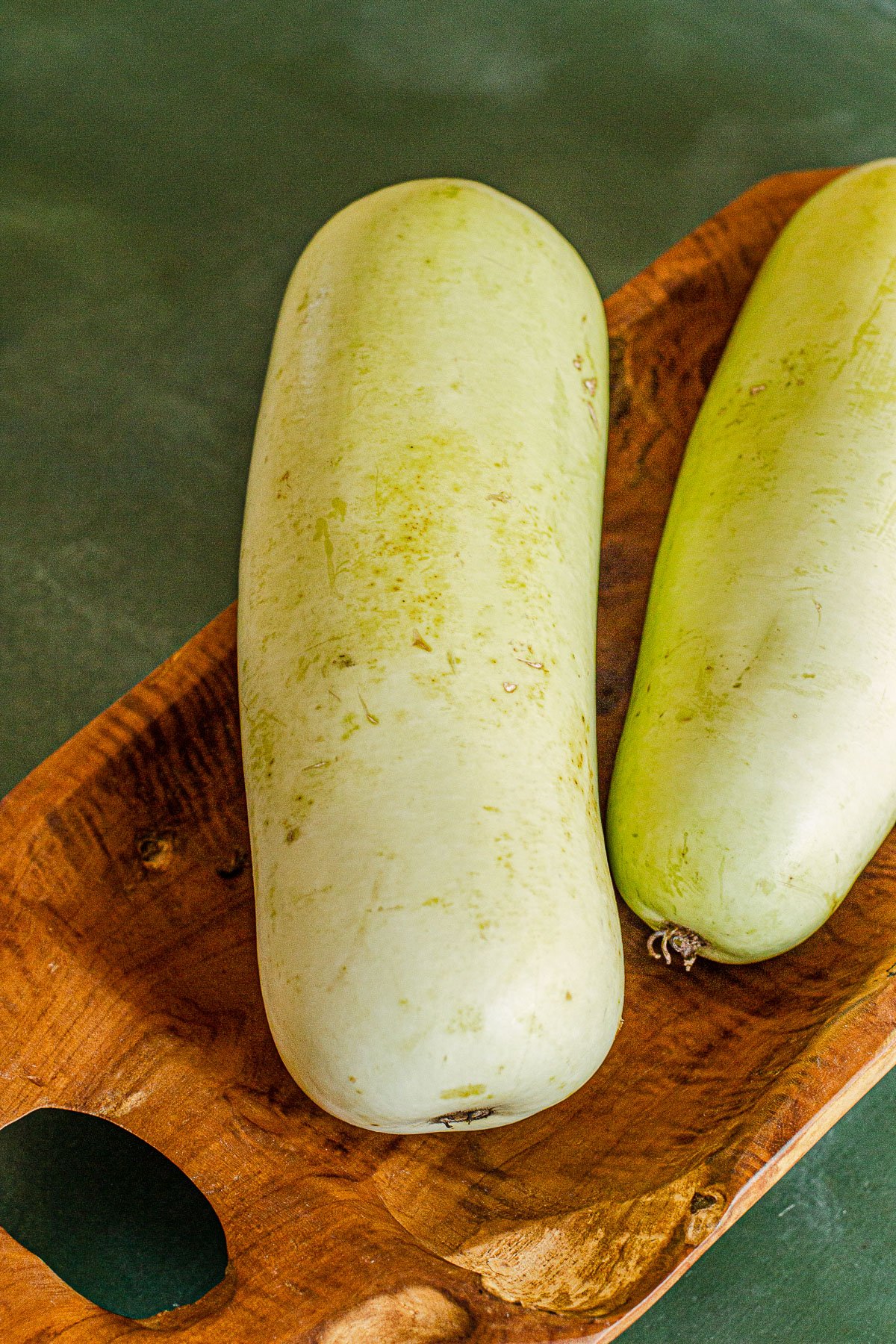 How do you prepare Upo for cooking?

To prepare the Upo for cooking first peel off the outer layer using a vegetable peeler.  Then cut it in half and scoop out the seeds. 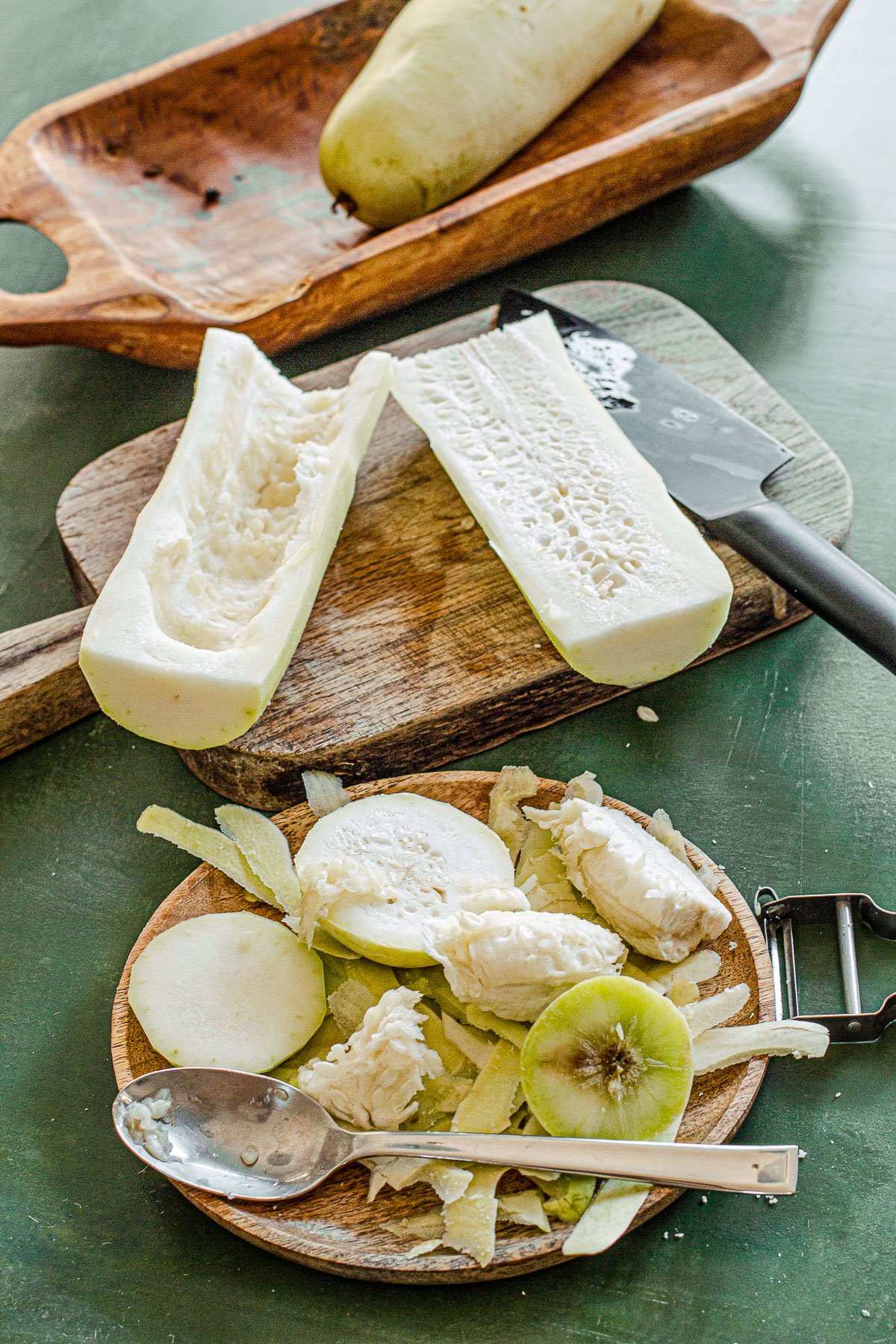 The inside of the Upo looks like this.  The seeds are attached to a spongy membrane.  It is edible, but some people don’t like that texture and the seeds can be a bit distracting to eat. 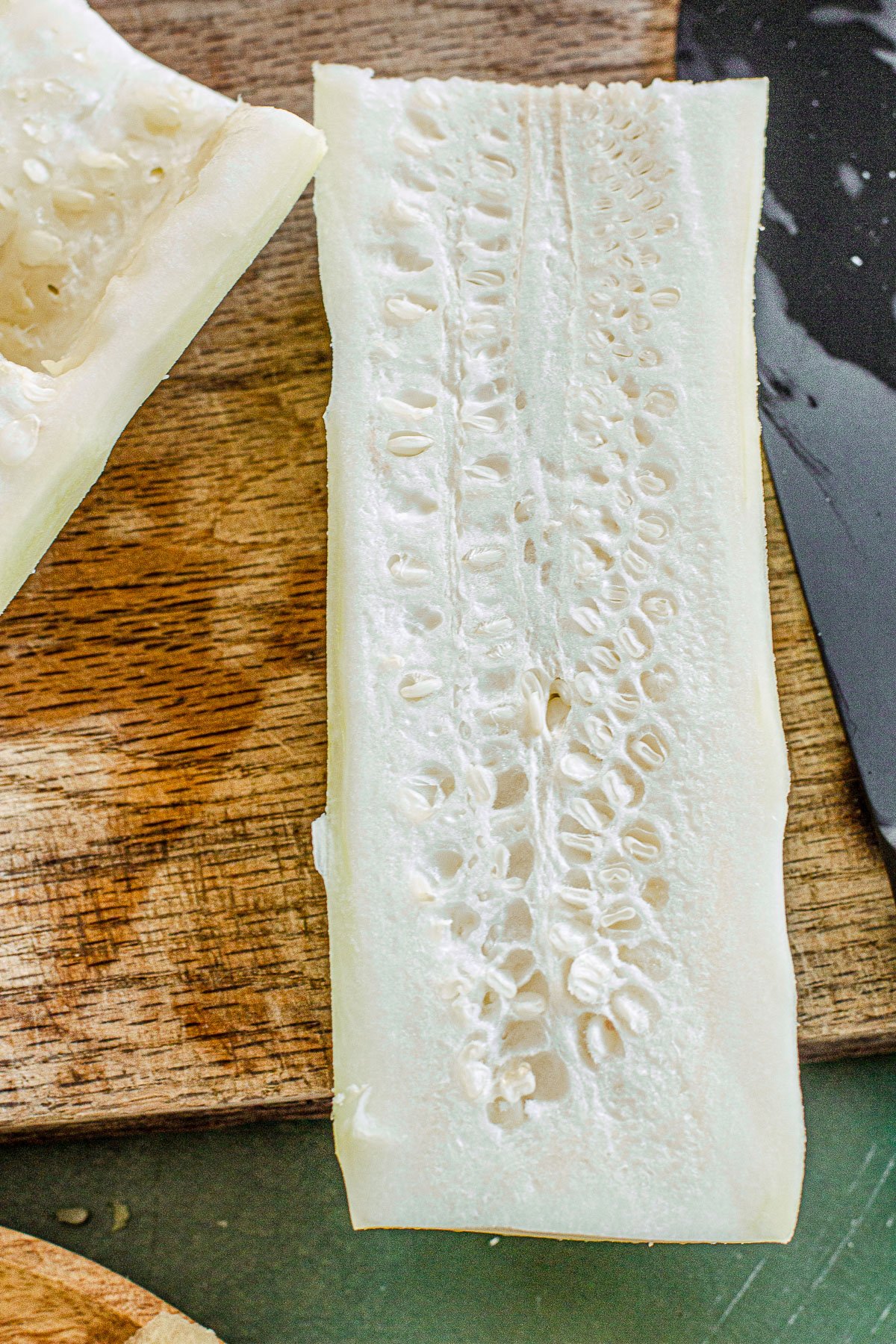 Now split the half lengthwise and then chop on the horizontal to make crescent like slices. 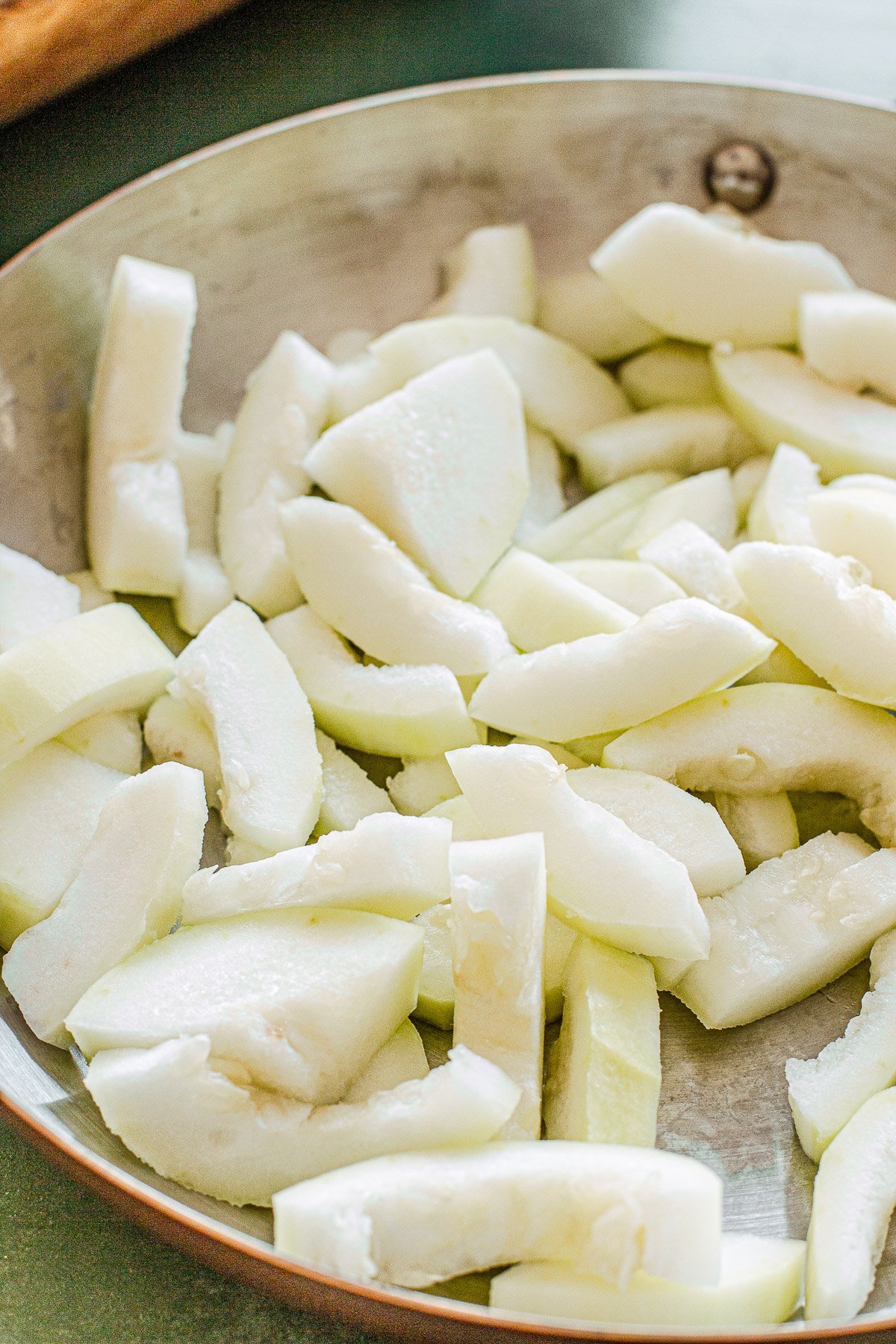 What Ingredients Do You Need For Tortang Ginisang Upo at Giniling? 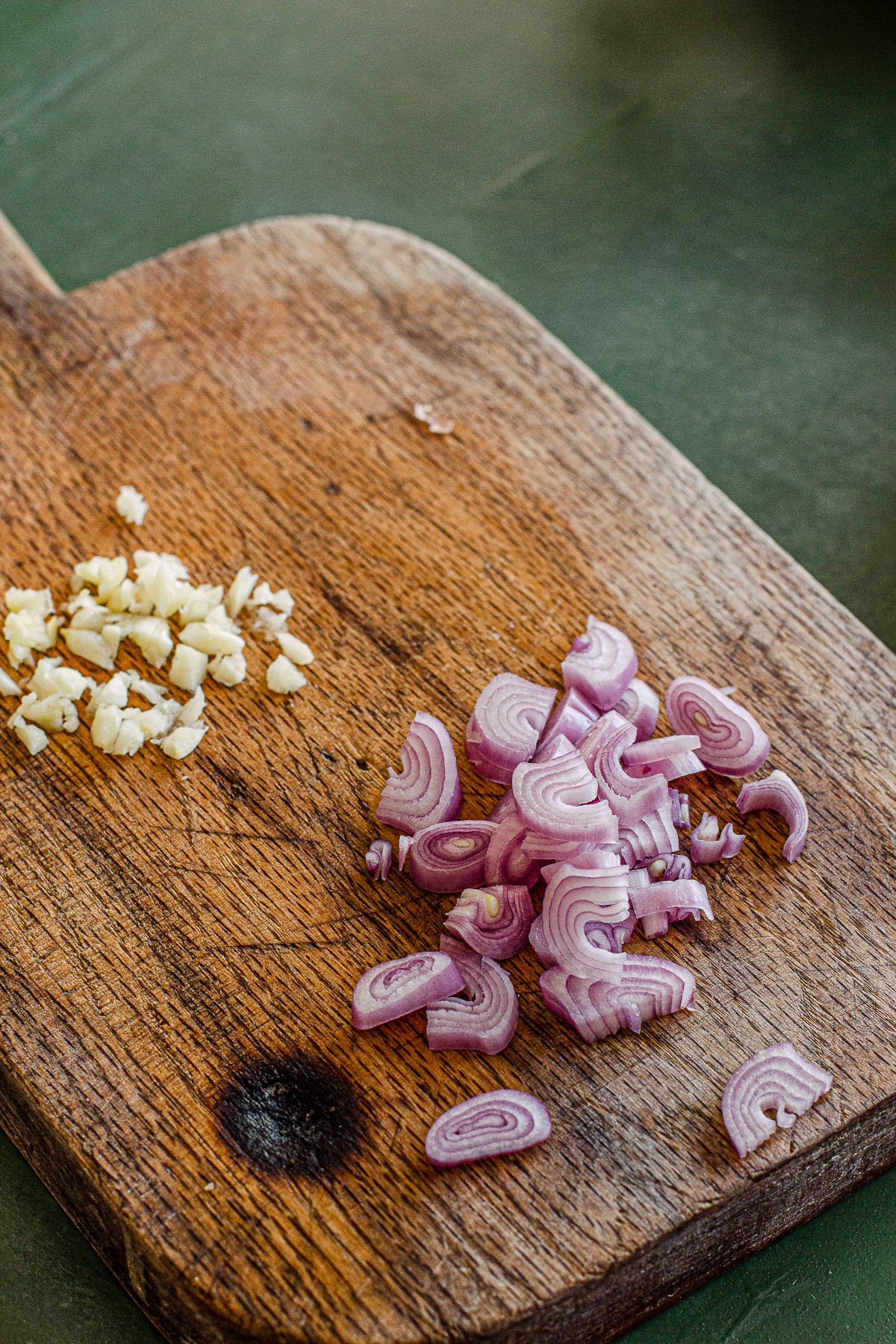 What are the Steps to cook the Ginisang Upo Fritata?

Upo actually cooks very fast.  So just combine together the upo, garlic and shallots in a large fry pan that you can put in the oven.  Add 1 tablespoon of the olive oil and stir-fry for about 4 minutes on medium heat. 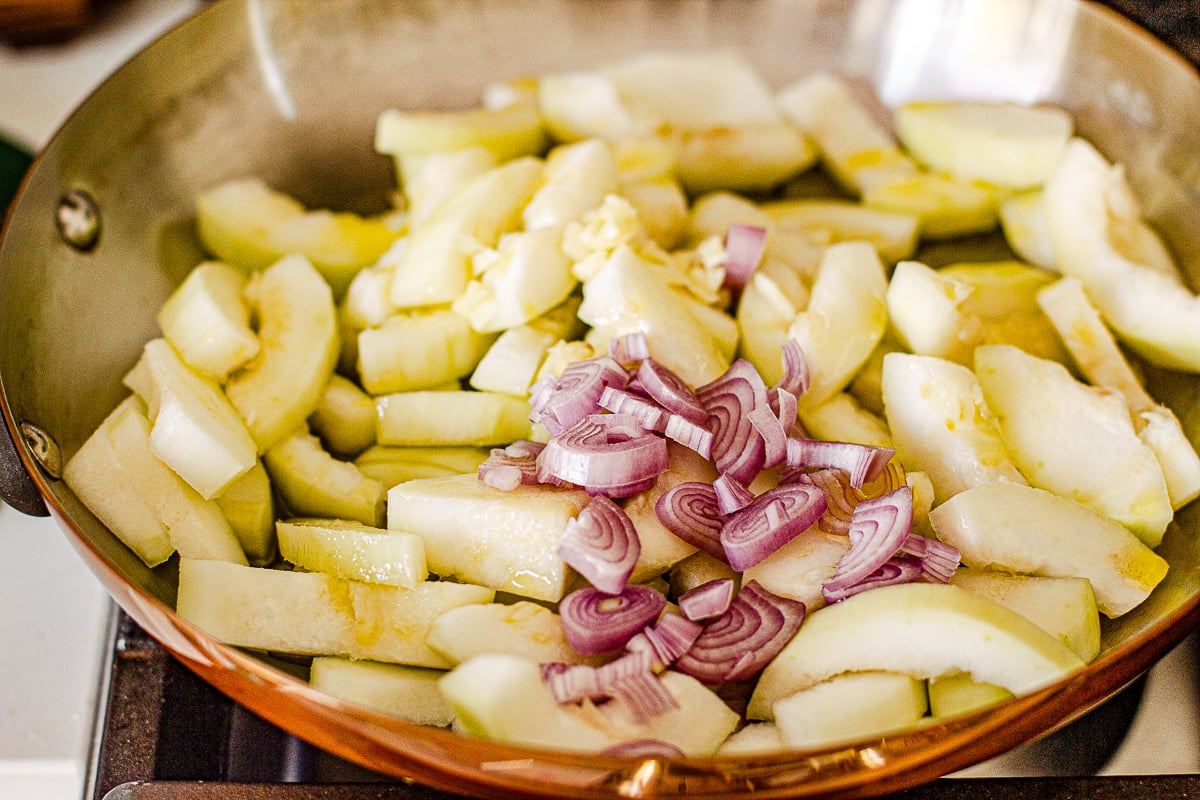 It should look a little golden on the edges and the shallots a little wilted. 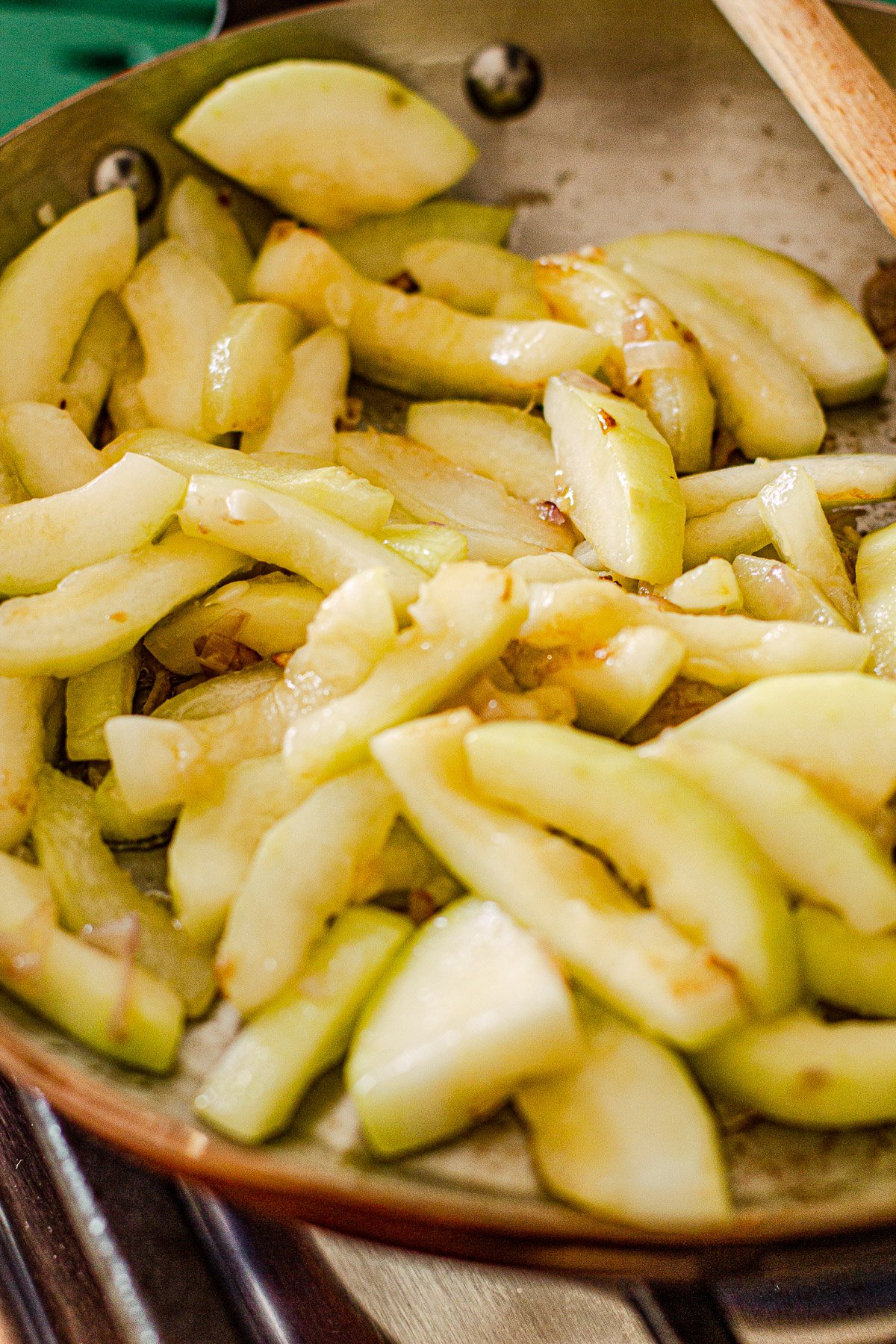 Now add in the cooked veggie grounds in and mix well with the heat turned off. 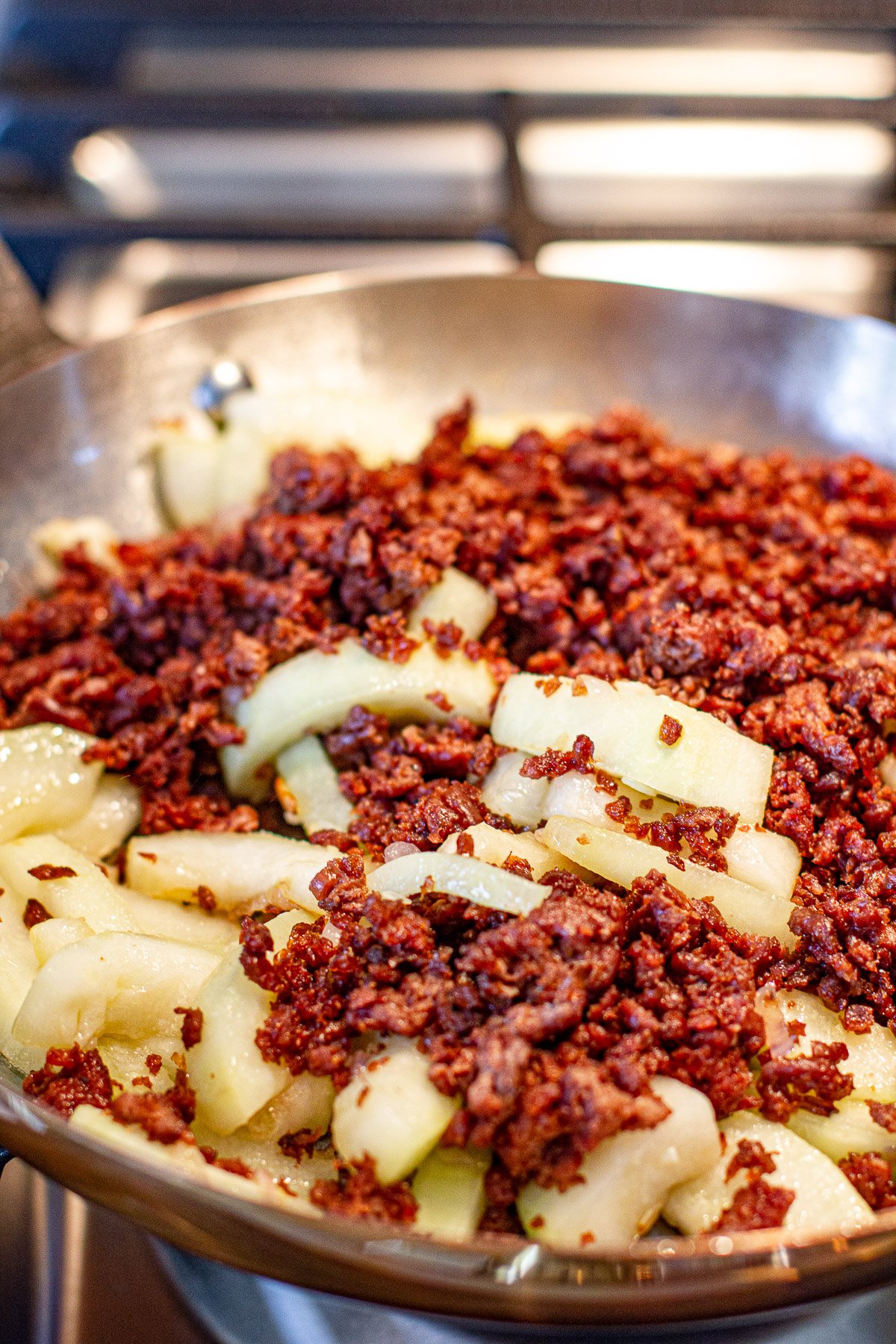 Scramble the eggs and season with salt and pour in the pan. 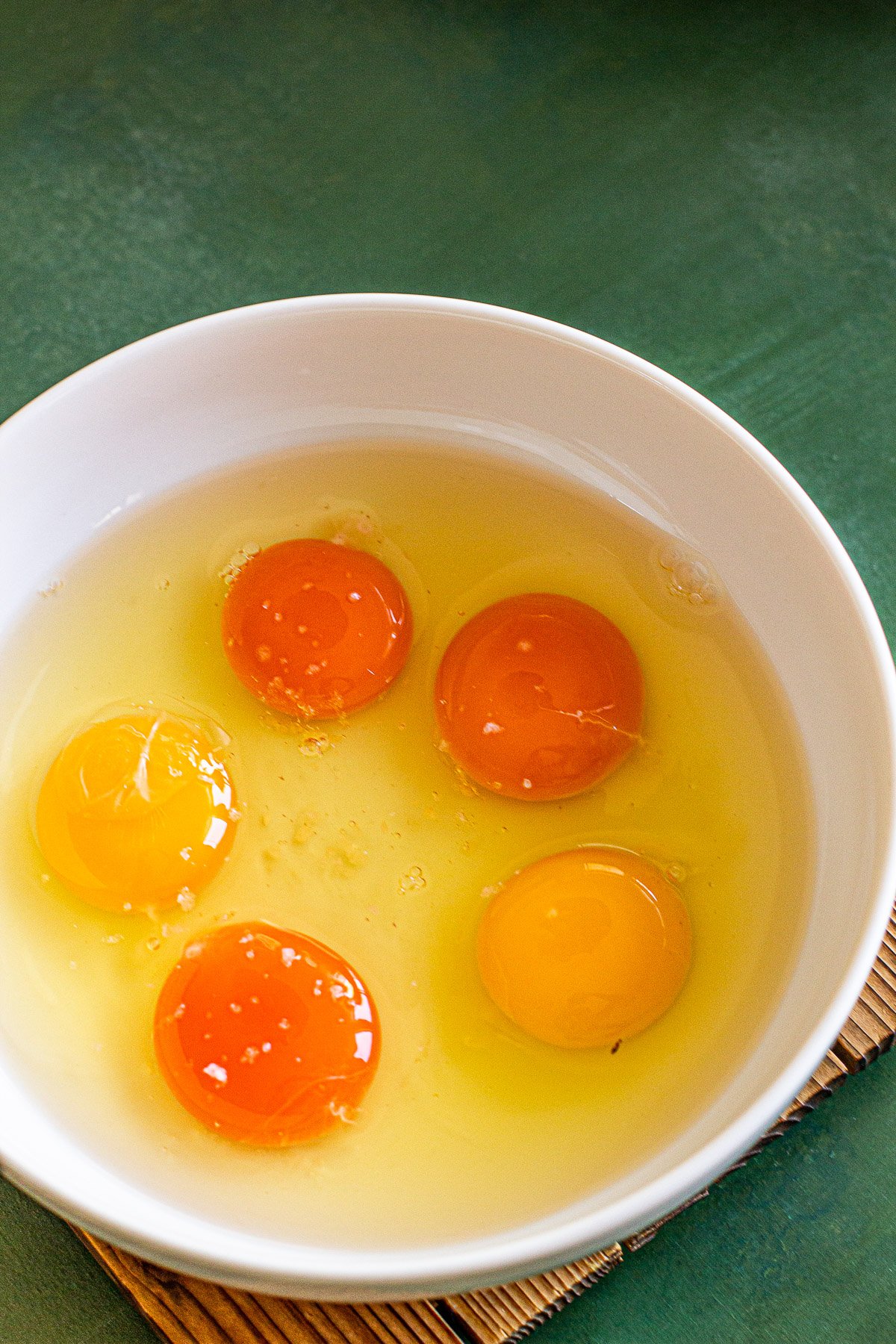 Bake just until the eggs are set, about 10-12 minutes. 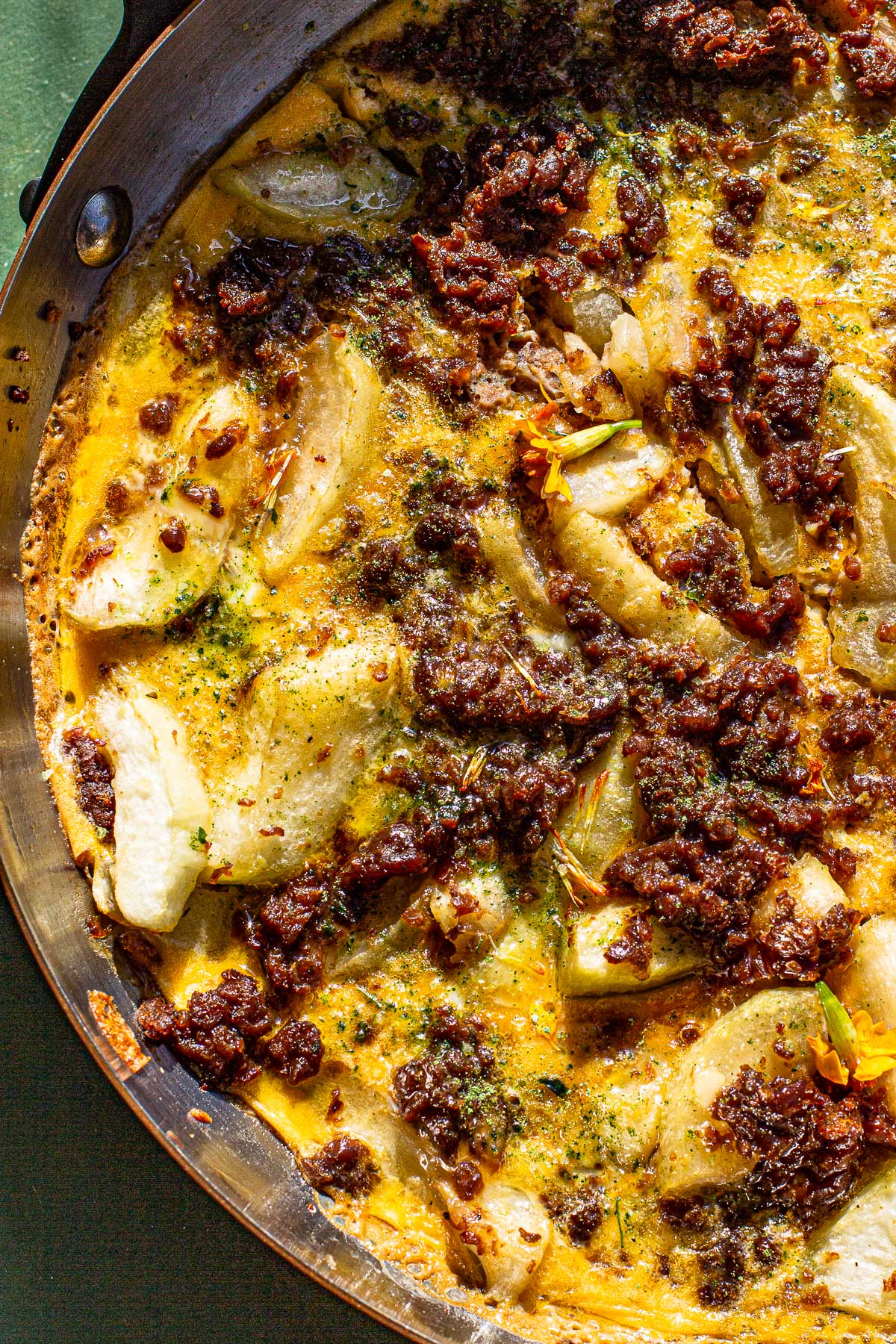 How To Serve it

To serve cut the frittata into wedges and eat with some rice with fresh tomatoes on the side. 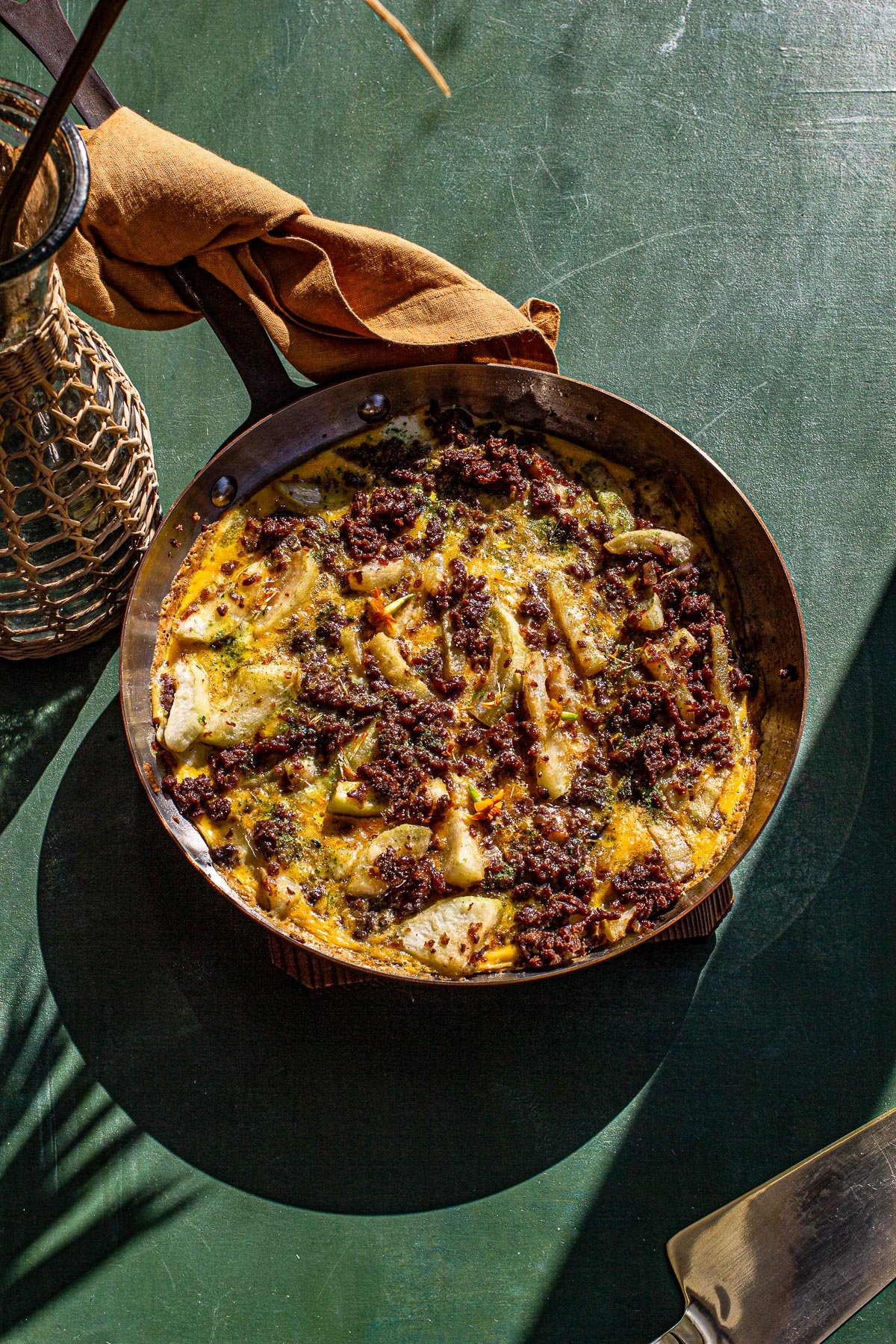 This Tortang Ginisang Upo at Giniling or in English Stir-fried Bottle Gourd with Vegan Grounds Frittata is a super quick meal to make during the weekday. With just a quick stir-fry of Upo and some vegan grounds with ginger and shallots, you can have a meal on the table in less than 30 minutes.
Print Recipe Pin Recipe Rate Recipe
Prep Time: 10 minutes
Cook Time: 15 minutes
Course: Main Course
Cuisine: Filipino
Servings: 16 Slices
Author: Rezel Kealoha