Inspired by the Great British Baking Show I made a tropical version of the Rum Nicky that Paul Hollywood loves so much.  I can see why.  It’s delish and oh so perfect for Holiday Baking! 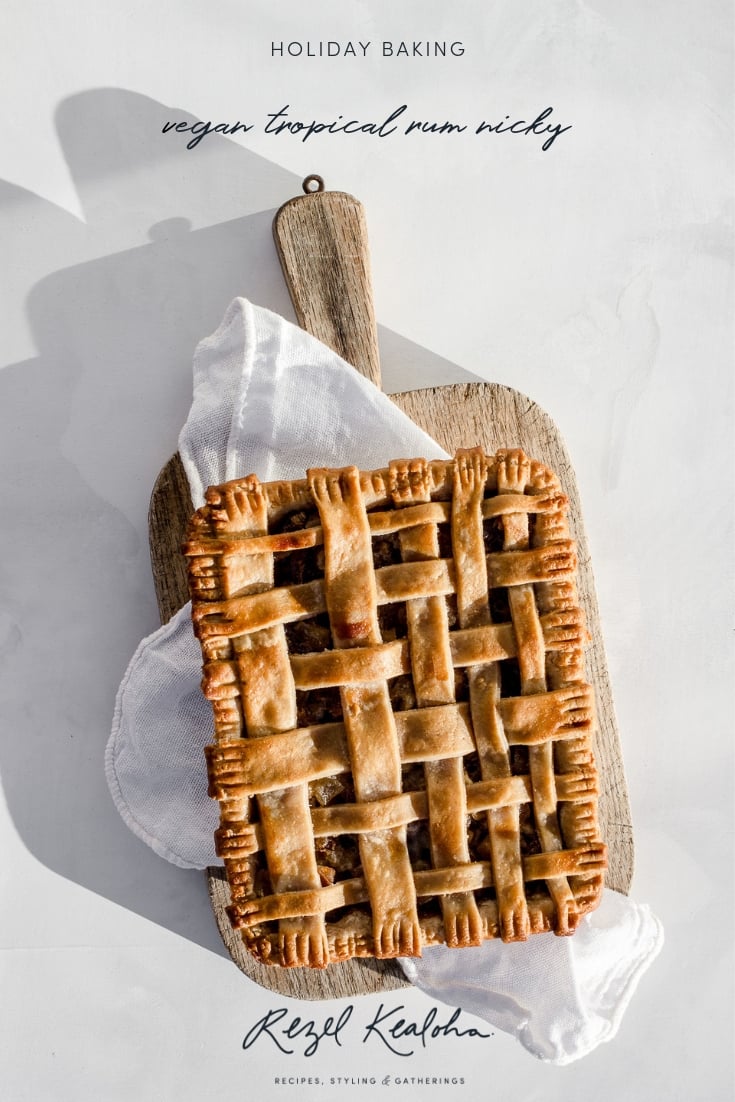 You guys.  I am obsessed with this show.  Who has seen it?  The basic concept is that a group of amateur bakers are put in a tent over a weekend to do 3 bakes.  A signature bake which they can practice at home and bake again at the tent, a technical challenge where they get minimal instructions and try to make the perfect recreation of a baked good and the finally challenge for the weekend is called a show stopper.  It’s the bake that shows off technical skill, finesse and flavor profiles.

Everyone is so nice to each other and in the end all they win is a cake stand and some flowers.  I’ve been reading up on the past winners and they are now full blown celebrities in the UK.  I just finished watching season 8 of the show.  I was a bit worried because Mary, Sue and Mel left the show, but I didn’t need to because the new hosts are so sweet.  I mean they cried every time someone went home and were visibly worried watching the bakers bake.  It’s even sweeter than before.

This recipe that I am sharing with you has been adapted from Paul Hollywood’s recipe on the BBC.  I made a few modifications by using my vegan pastry crust and adding some tropical flavors. 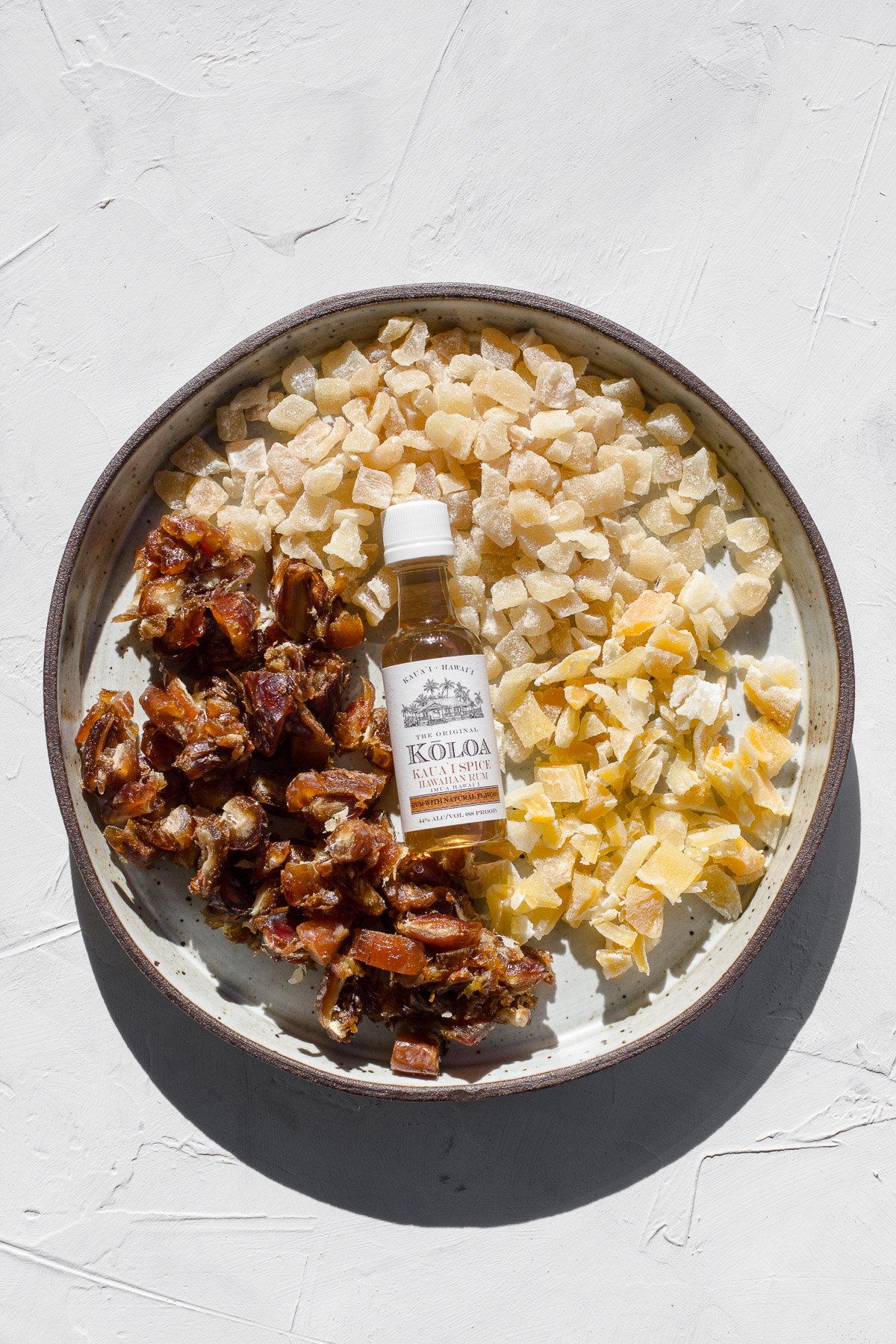 Instead of using apricots from the original recipe I replaced it with dried pineapple and mango.  I also mixed the filling with some Spiced Rum I got from Kauai.  I mixed them all in with some pitted dates and coconut sugar while I made the dough. 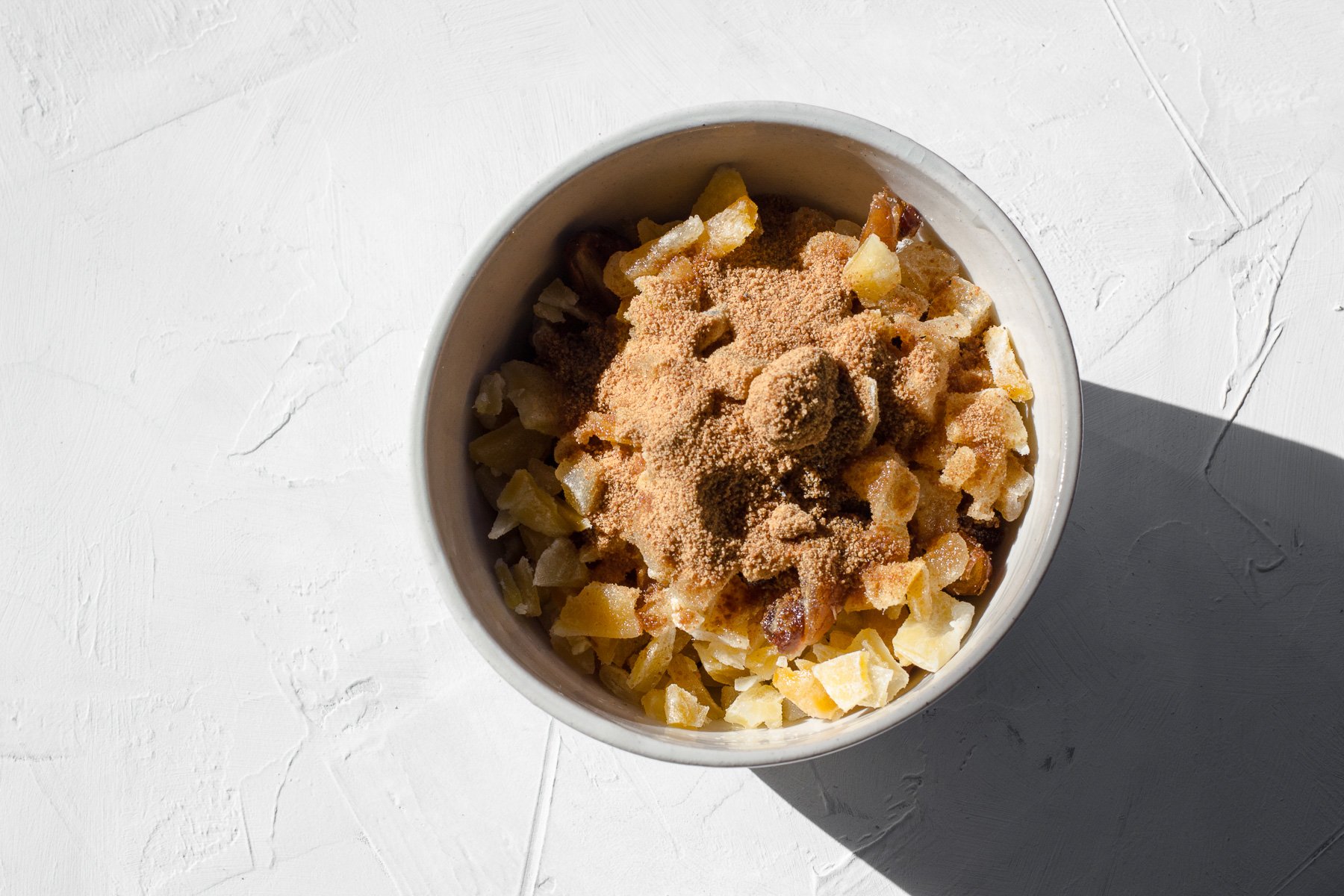 I use my favorite vegan butter to make the flaky vegan pastry crust.  You can find the recipe here.  I used a mini slab tin, but you can use a standard 8 inch pie tin to make this Tropical Rum Nicky. 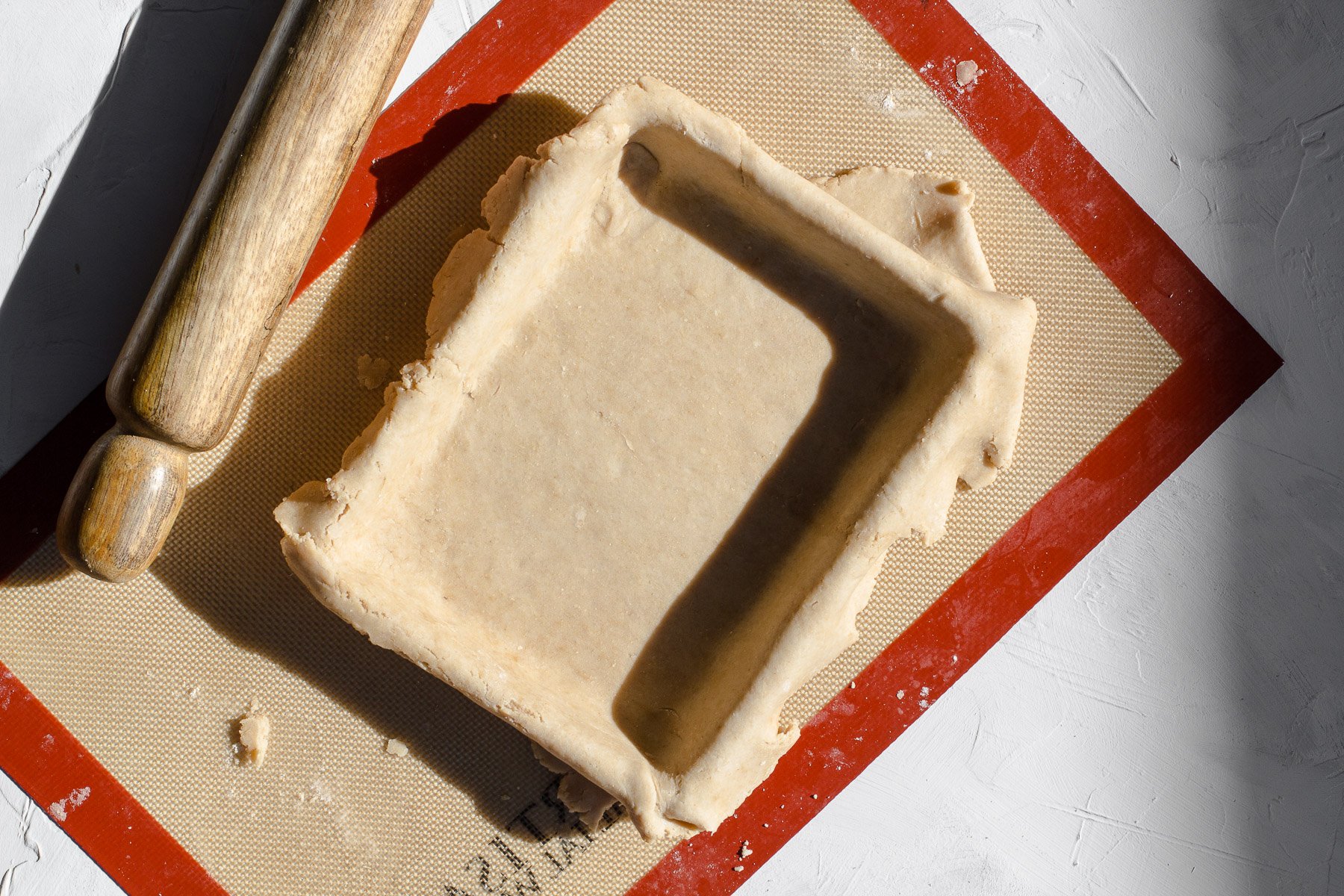 Then fill it with the dried fruit that has been soaking in some rum.  Dot with more vegan butter and then the hard part begins.  Make a lattice out of the rest of the pie dough.  If you need help view this tutorial.  It made my head hurt. 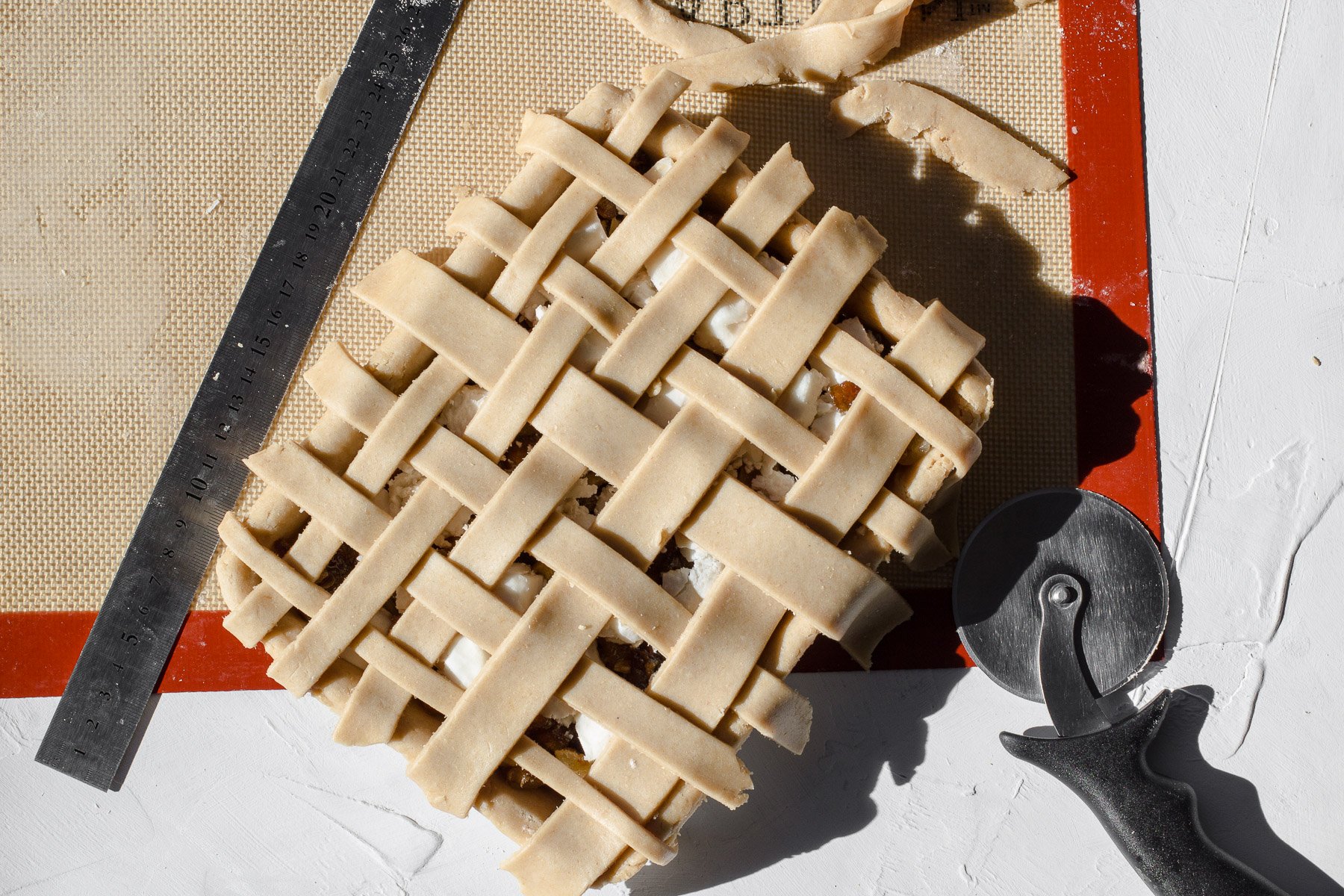 To make a vegan wash to get the brown color on the pie mix 1 tablespoon date syrup to 2 tablespoons Almond Milk.  Mix well and brush on top of the pastry.  Then use a fork to crimp and seal the edges. 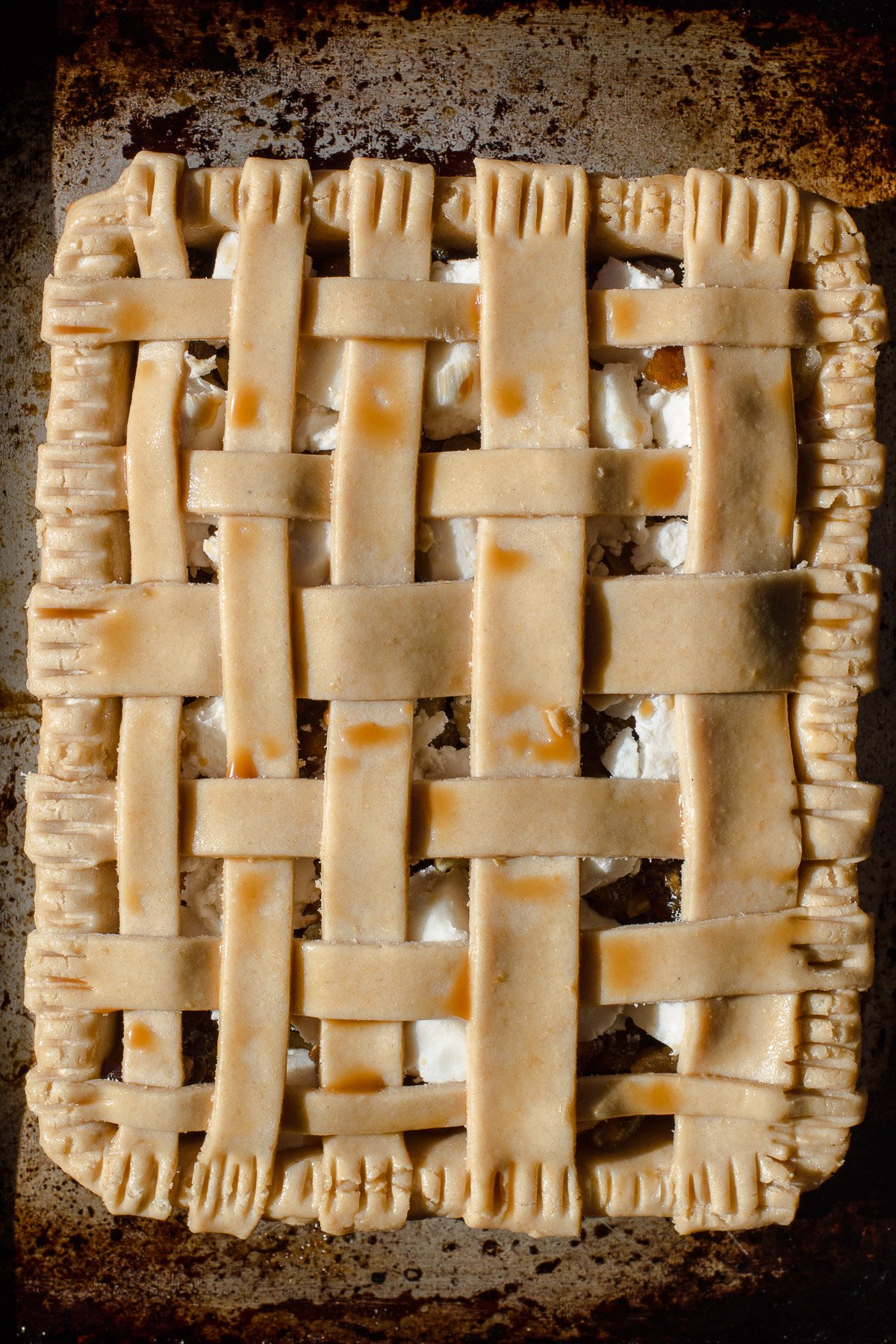 Bake in the oven for 20-25 minutes until the filling is bubbling and the crust is a nice and golden brown.  Take out and let it set for about 10 minutes before cutting.  I would actually wait until the pie is fully cooled down so it cuts better. 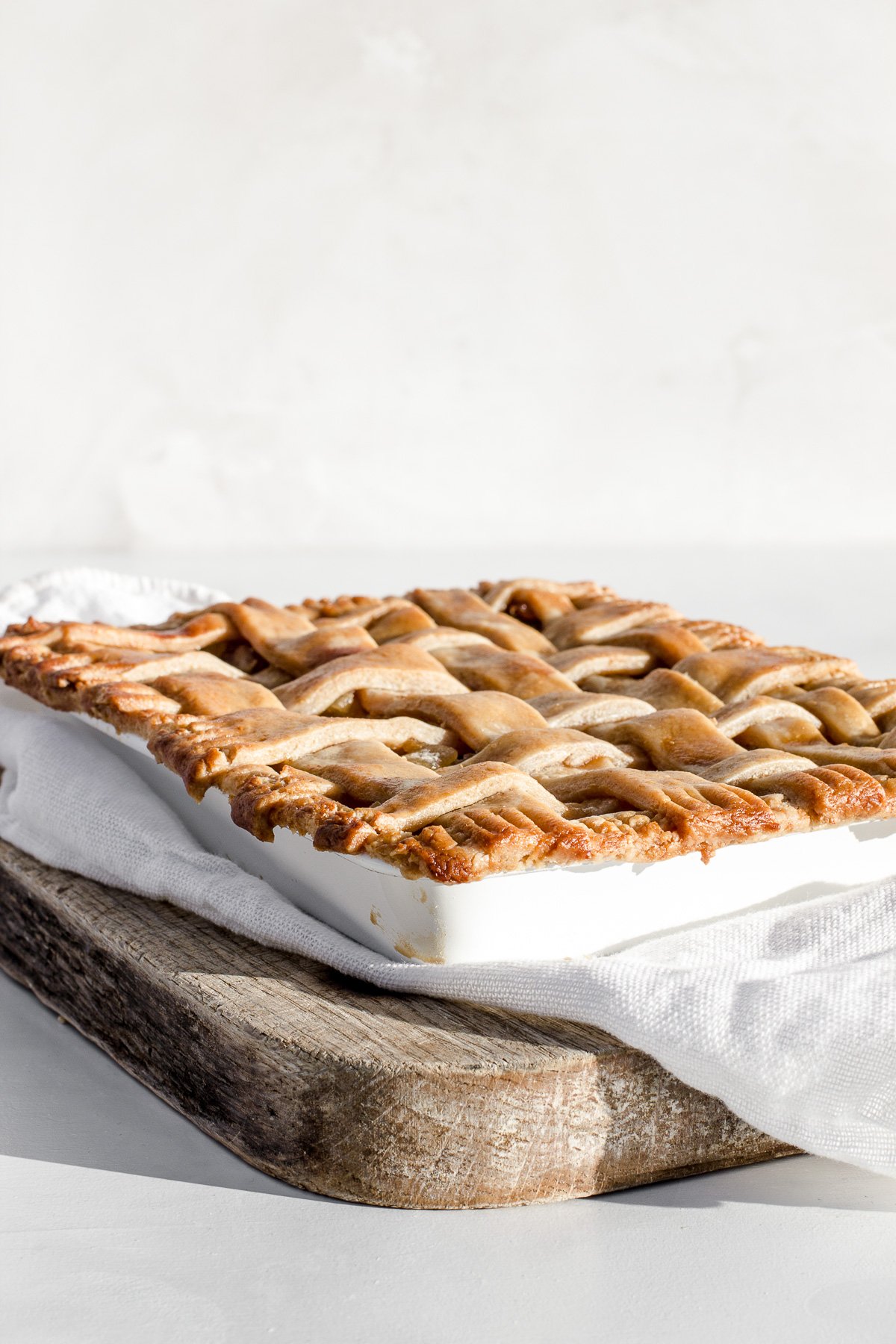 Okay when they were baking this on the show I was so intrigued that I had to try it myself.  When I took my first bite, I know why this Rum Nicky is such a favorite of Paul Hollywood. 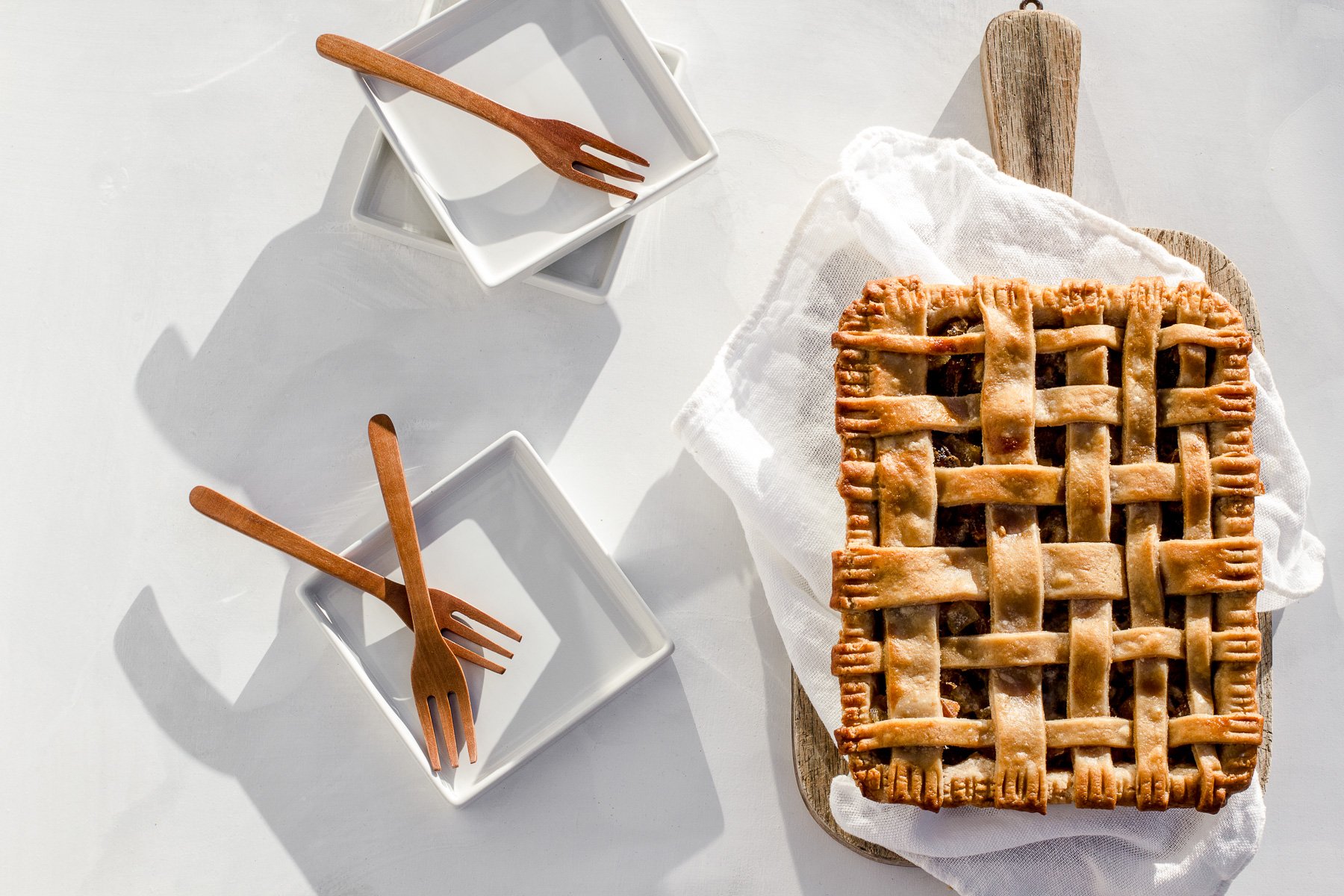 Like what they talk about on the show just as long as you burn off the alcohol  you just get the flavor of the rum and not the alcohol. 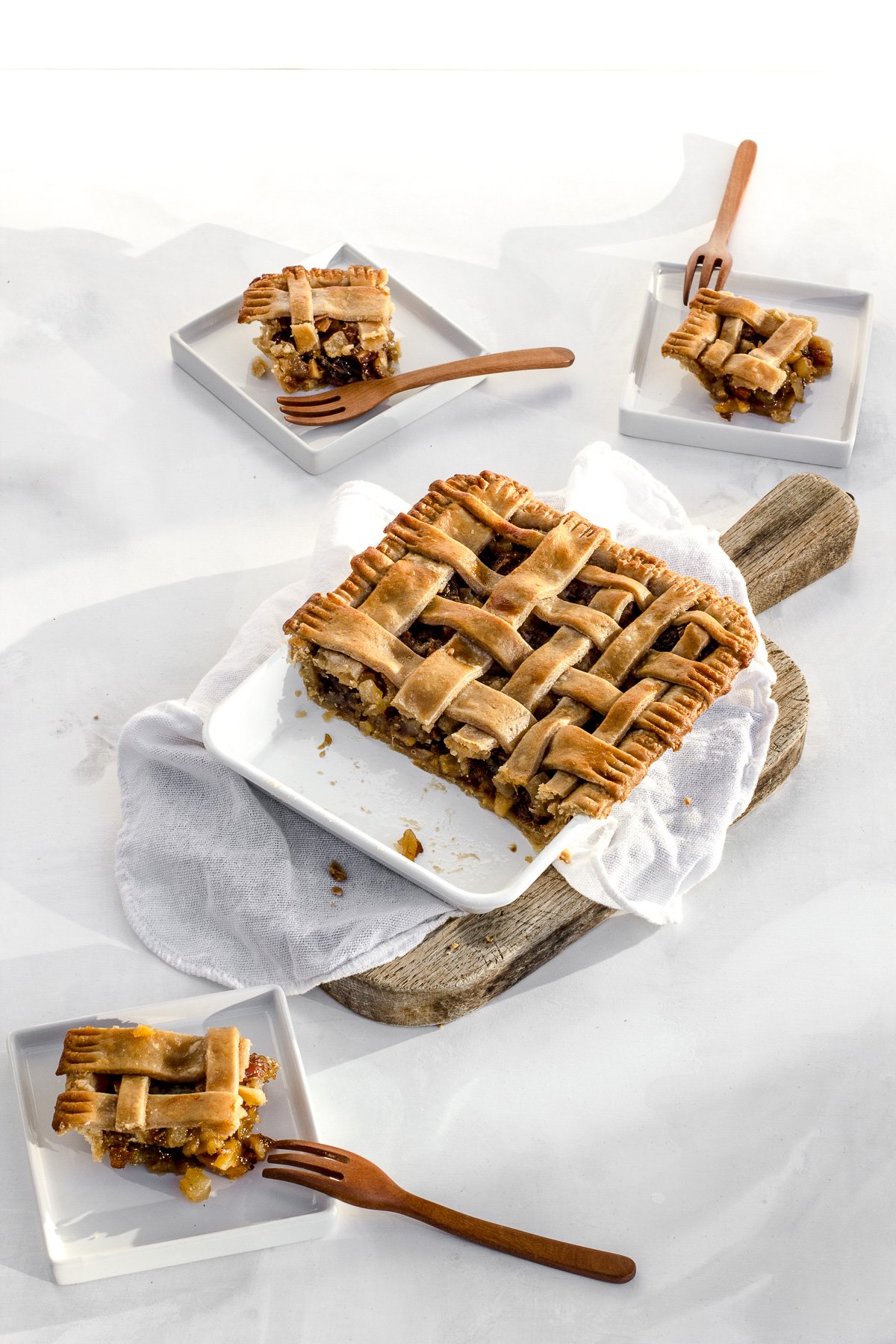 The mixture of the dried fruit and the butter bakes in the a nice gooey consistency and combined with the flaky crust it’s just divine. 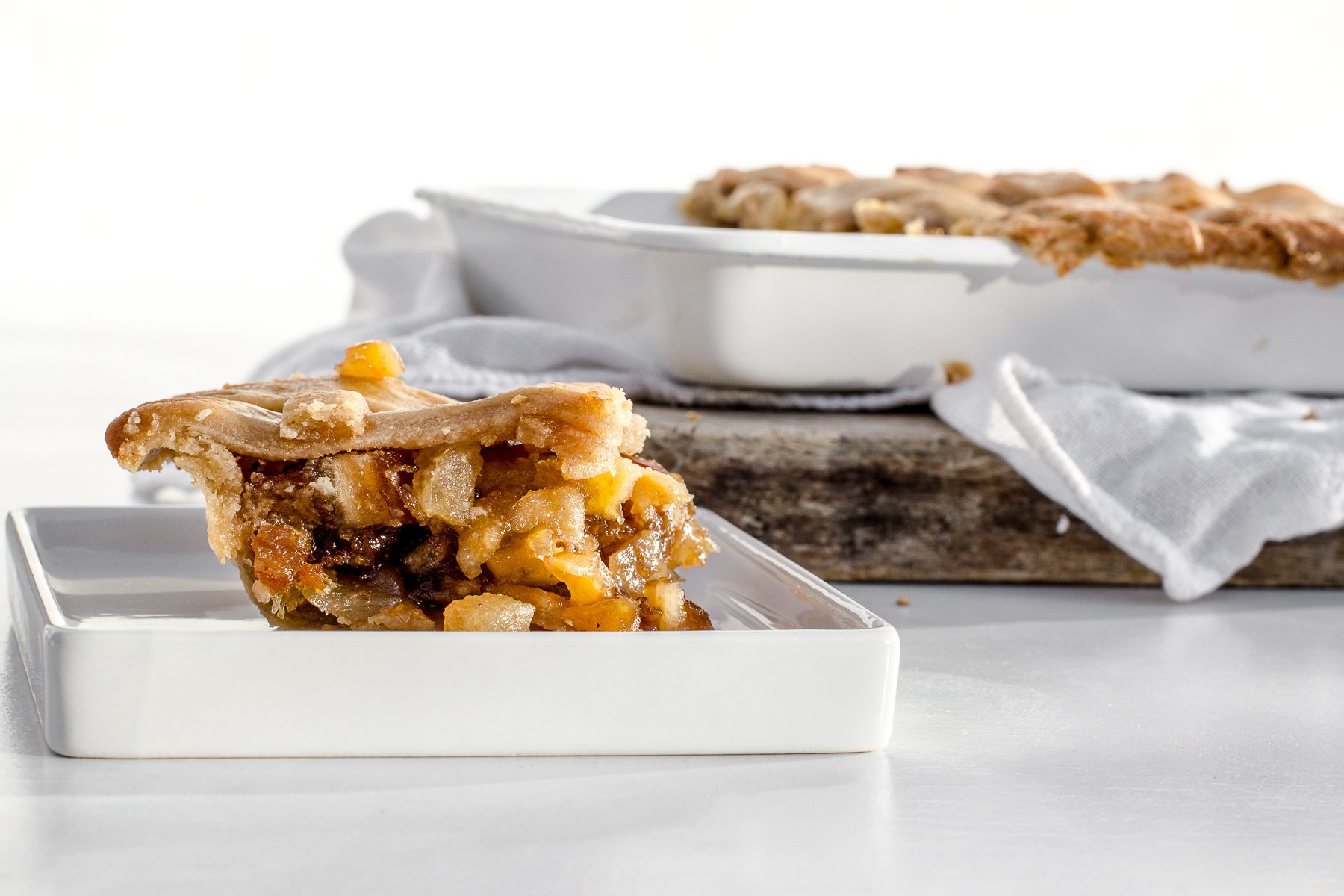 I don’t think anything else is needed with the pie.  If you do need to have something with it, I would suggest some coconut ice cream. 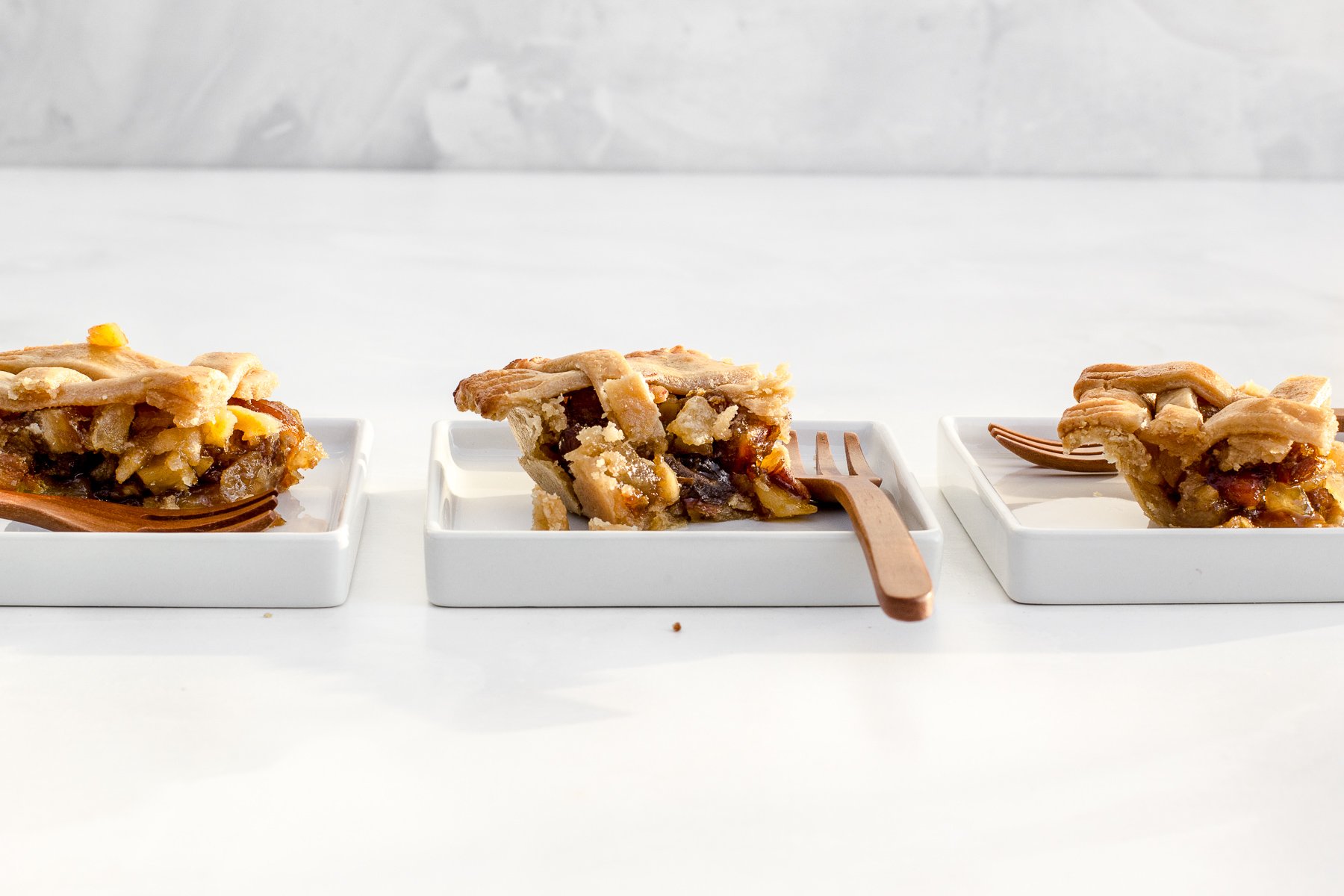 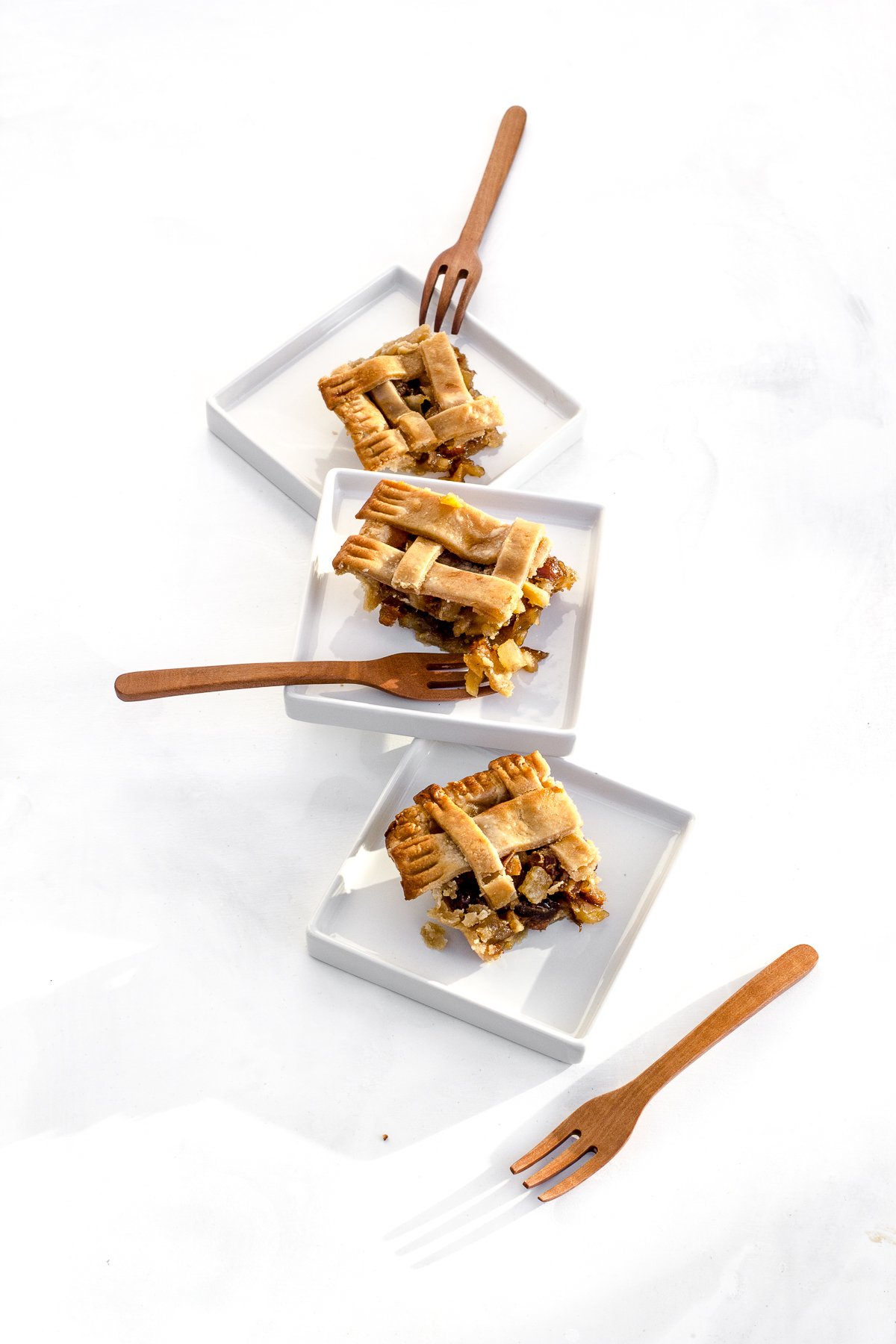 If you want something different for dessert during the holidays I would highly recommend making this pie.  It’s so festive and delish. 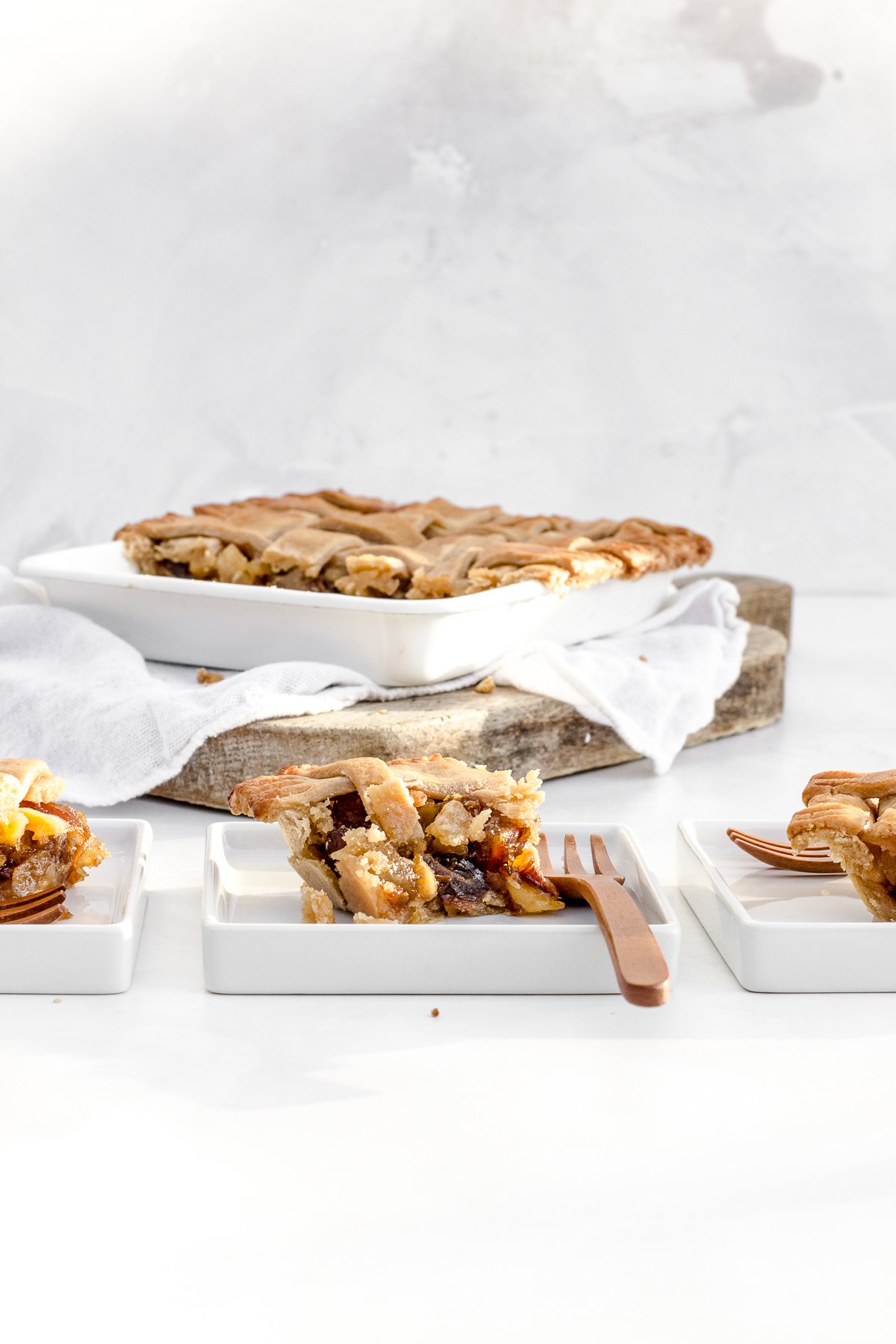 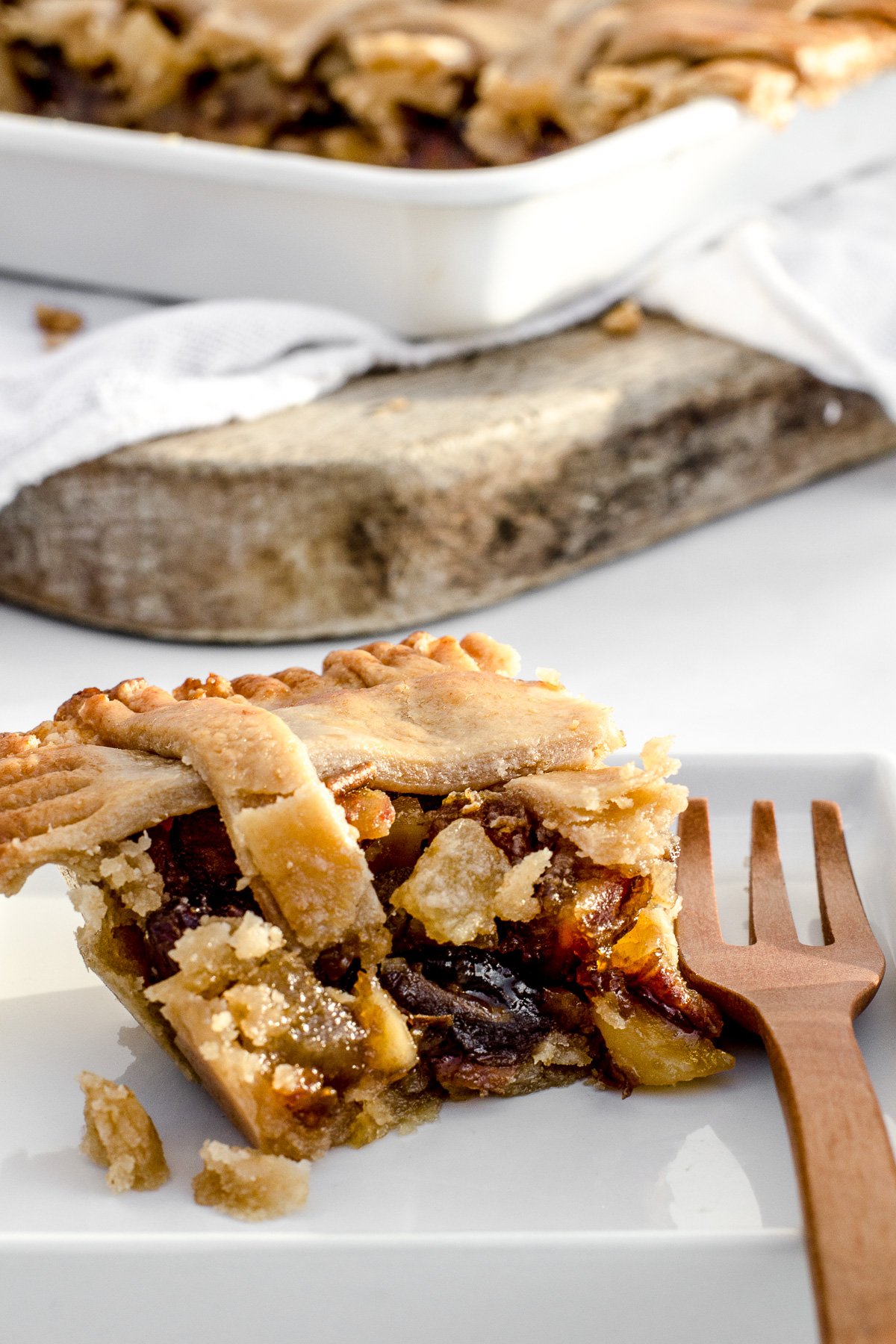