Chicken Adobo with Coconut Milk from See You On Sunday + Giveaway

This Chicken Adobo with Coconut Milk is from Sam Sifton’s new cookbook – See You On Sunday.  It was originally published in the New York Times in 2011.  I’m excited to share the recipe with you AND giveaway a copy of his new book.

I remember when this recipe was originally published by Sam Sifton in the New York Times in 2011.  It created the great Adobo debate.  The Chicken Adobo with Coconut Milk recipe, was from Romy Dortan and Amy Besa the owners of the Purple Yam restaurant in Brooklyn.  One of the pioneers of Modern Filipino Cuisine. 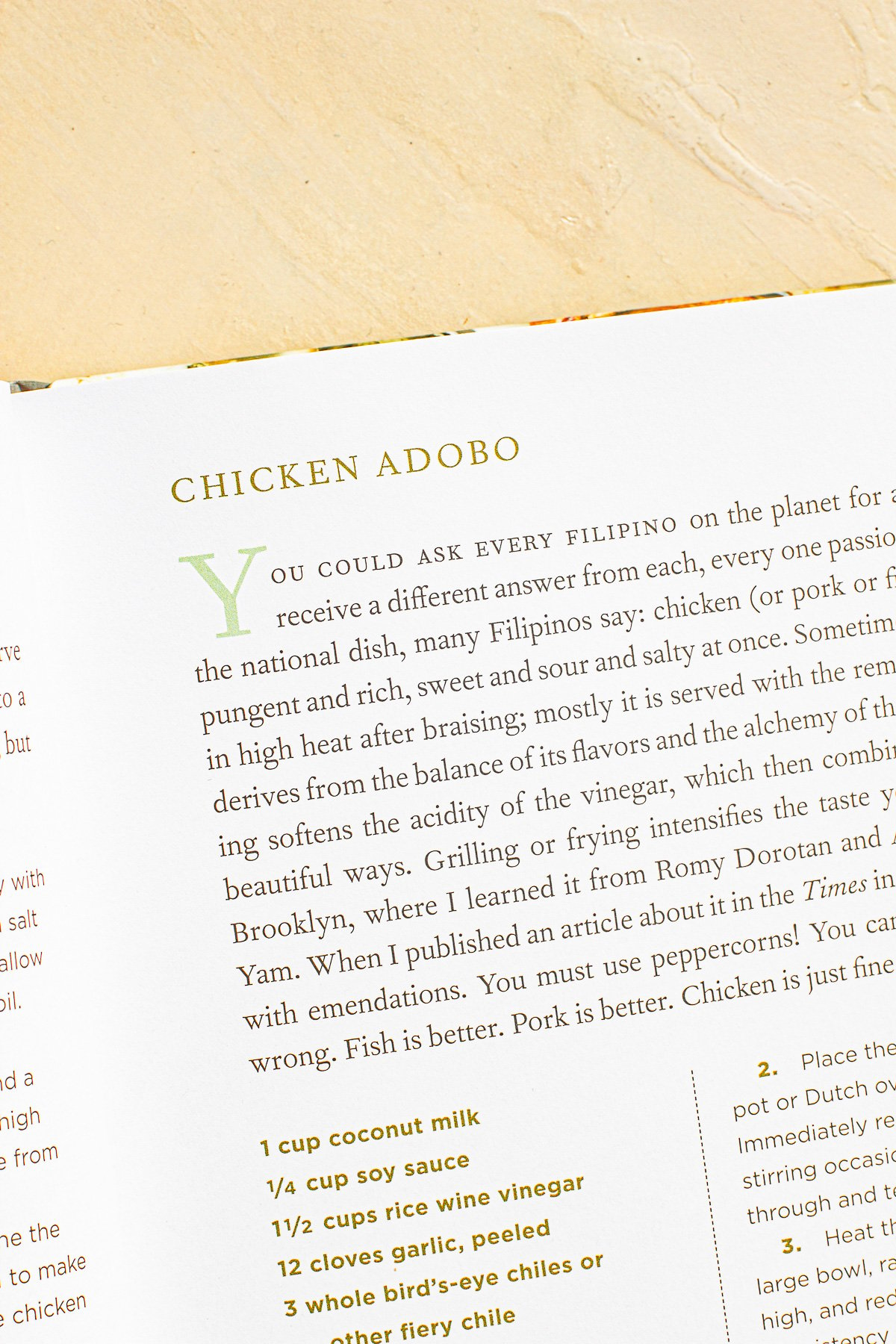 In the article Sam talks about how divisive Adobo is.  There are many variations depending on how it was passed down in your family and also what ingredients they had access too.  Many Filipinos without realizing it forget that the Philippine Islands are vast and many about 7000+.  Of course there will be variations.  From just the simple soy sauce and vinegar combo to the additions of chili, brown sugar and in this case coconut milk.

My variation on Chicken Adobo with Coconut Milk

When I received my advance copy of See You On Sunday through my Ambassadorship with Ten Speed Press the first thing I did was look through the index.  There it was under “Chicken”.  Off I went to page 25 with a smile on my face.  The New York Times, specifically Sam as always been a great supporter of Filipino Cuisine. 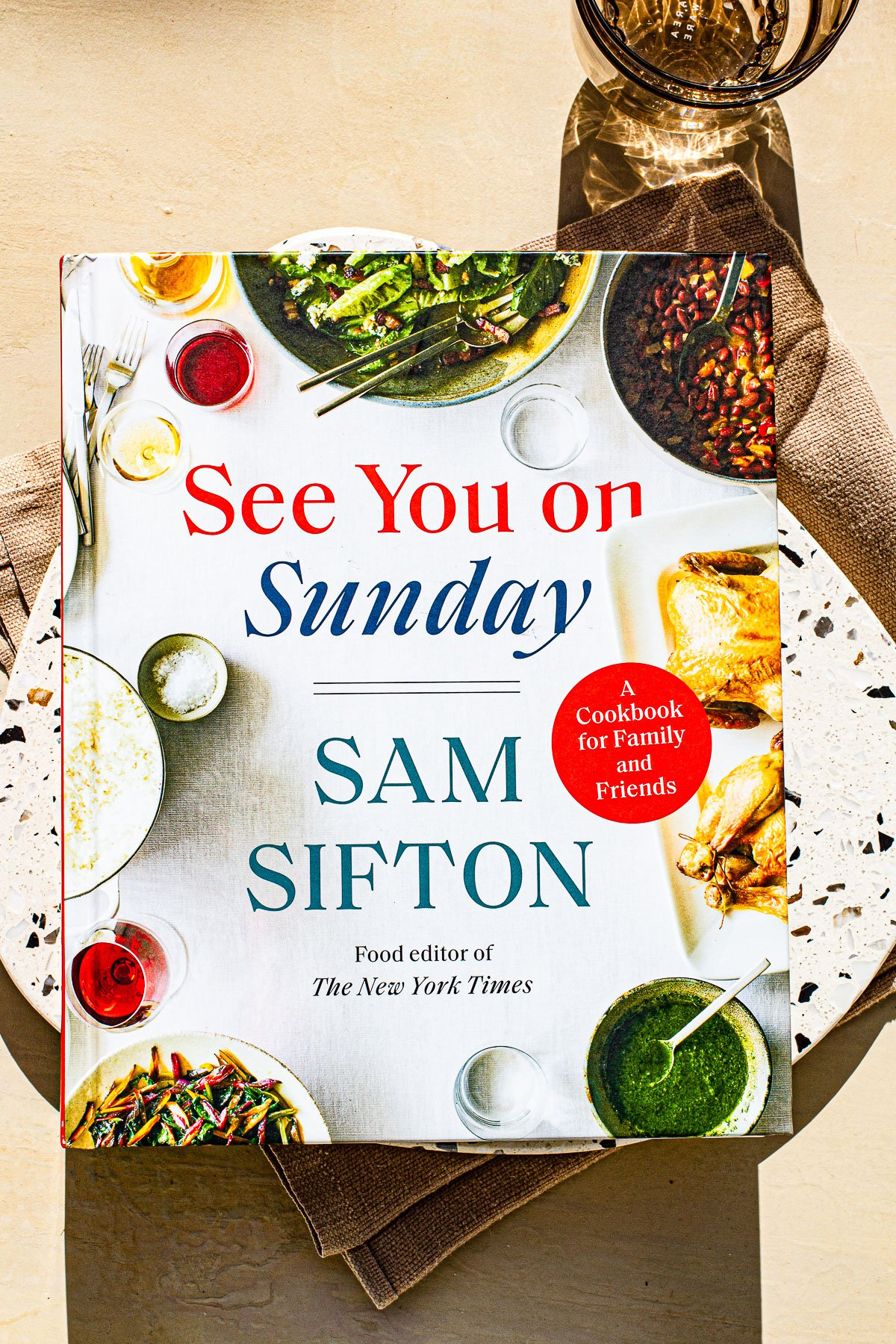 In the body of this blog I will talk about the ingredient modifications that I made and in the recipe card it will be the same ingredients in the book.

What Ingredients I used for Chicken Adobo with Coconut Milk

The book is all about cooking big meals, so his recipe can serve up to 6 people.  We are only three in the house this week so I cut some of the ingredients by a bit, still leaving all the coconut milk and cutting the chicken by half.

I actually cooked the adobo right away without marinating it and it still turned out bomb.  Combine the coconut milk, coconut aminos, vinegar, garlic, bay leaves and pepper in a large lidded pot.  Add in the chicken and simmer on medium to low heat for 30 minutes.  I checked on it half way and turned the chicken over so that the sauce gets soaked in on both sides.

At the 30 minute mark my sauce was already very reduced and the coconut oil separated from the coconut milk.  So I decided to just turn up the heat and fry the chicken thighs in the pan in the reduced sauce for a minute and a half on each side. 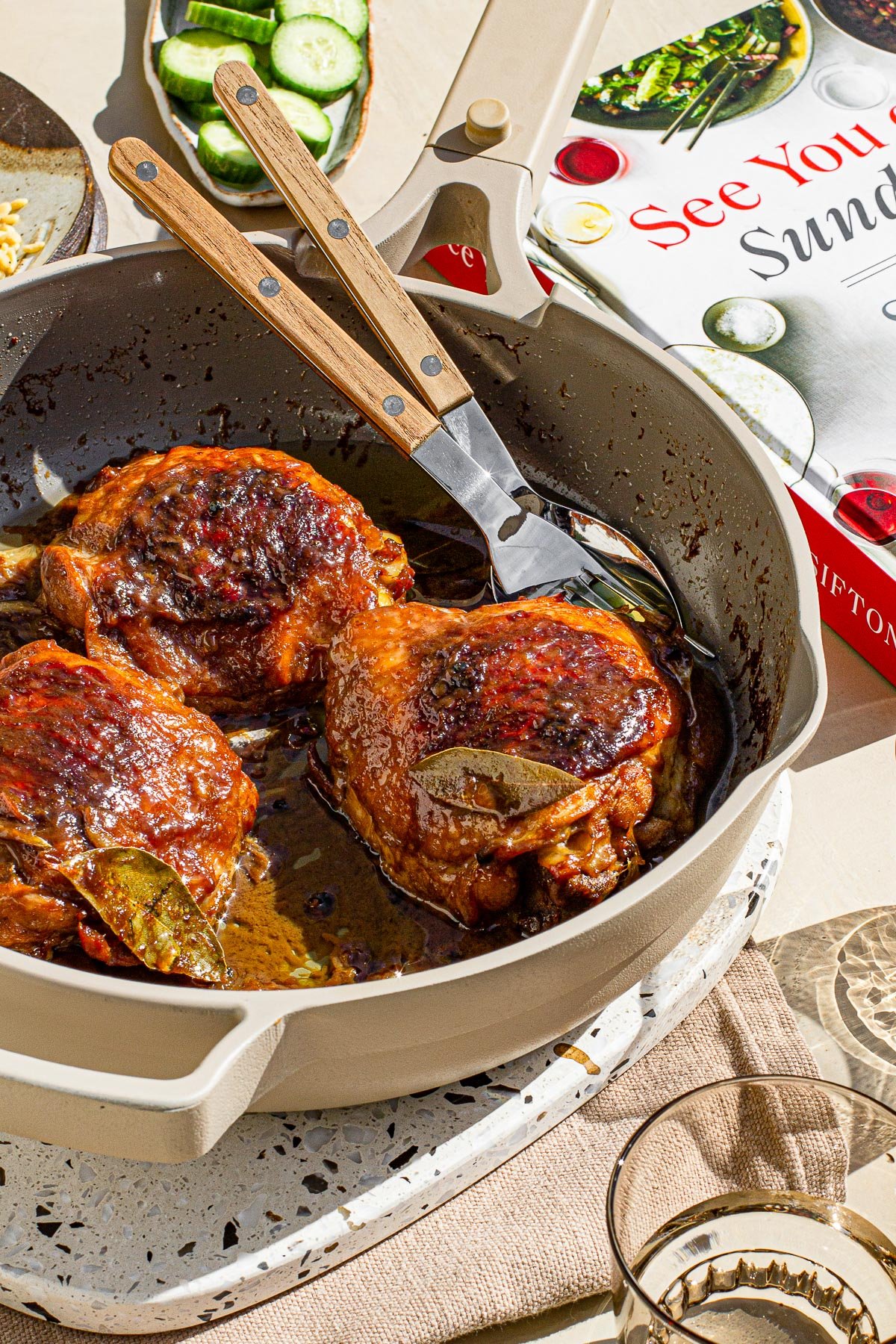 I have to admit, it was my first time making Chicken adobo with coconut milk and I have to say it’s damn good.  The sauce is creamy and the vinegar mellows out nicely and the chicken thighs are super garlicy and super sticky.  It’s defiantly a recipe to make again.  We ate it with some rice, fresh tomatoes and cucumbers. 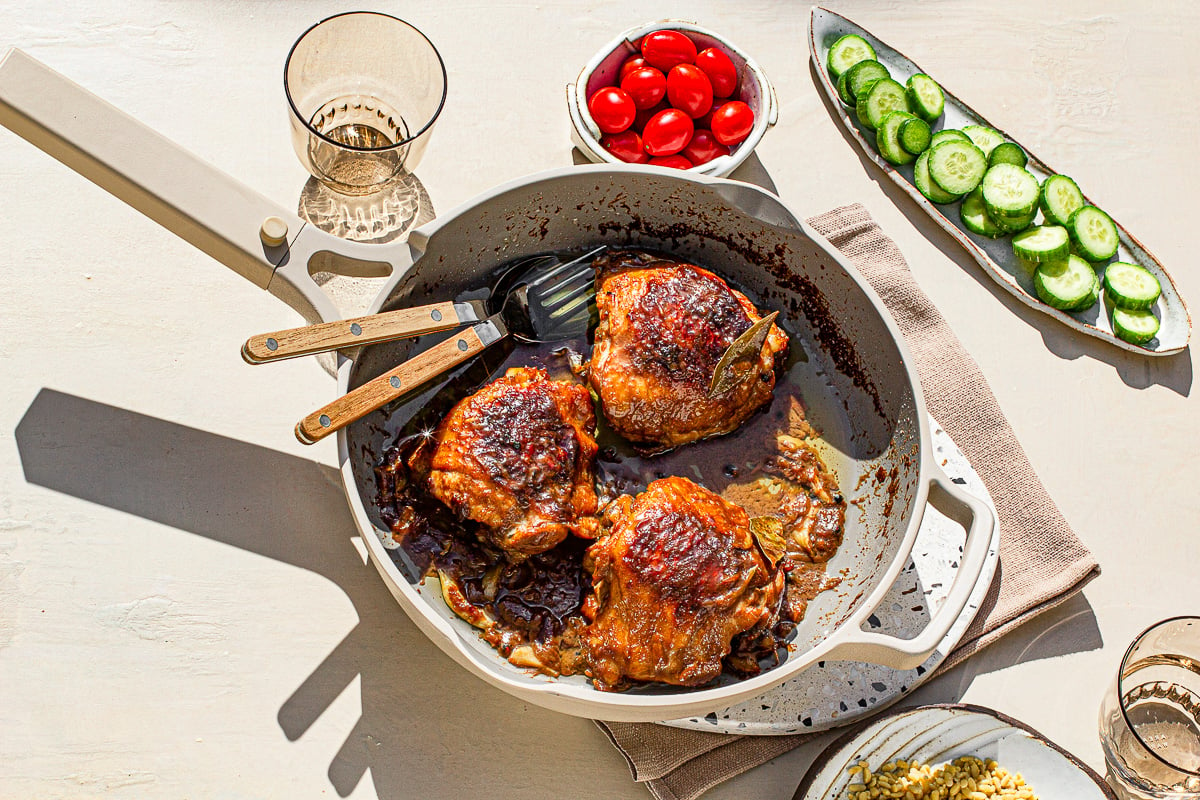 I’m so happy that the team at Random House Books is letting me giveaway one copy of See You On Sunday to one of you!!  Just follow the instructions below and I will let you know if you won by emailing you directly. 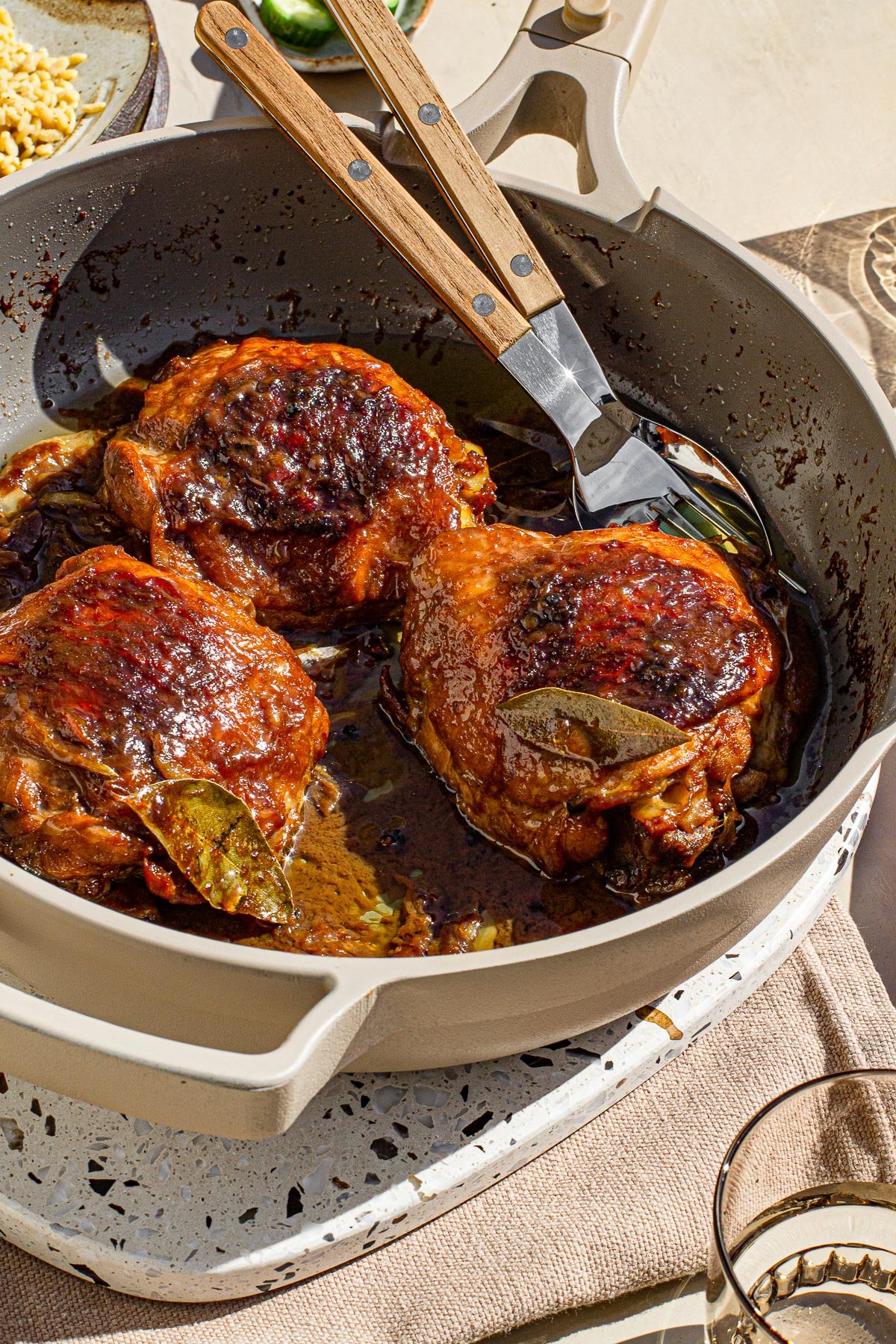 You can replace 1 to 1 the soy sauce with coconut aminos and if you can find it or order it please try to use coconut vinegar in place of the rice wine vinegar.
Did you enjoy making it? I would love to see it! Tag me on Instagram @rezelkealoha with the #rezelkealoha!

See You On Sunday by Sam Sifton