This Vegan Cashew Tart is the perfect alternative to Pecan Pie.  Each bite has salted roasted cashews and a sticky taro and coconut almost caramel like filling. 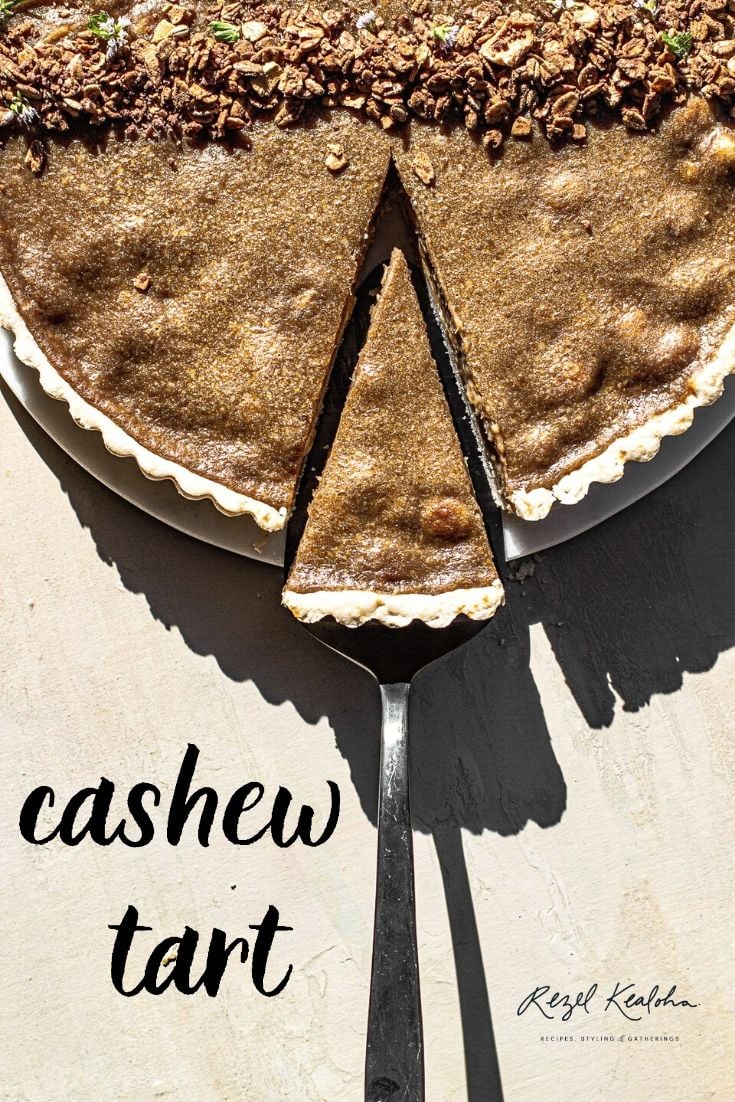 Alright, it’s after Halloween and that means it’s go time.  It’s all about planning what to eat for each of the holidays coming up.  THAT holiday I am talking about is Thanksgiving.  And the first thing I always think about is dessert. 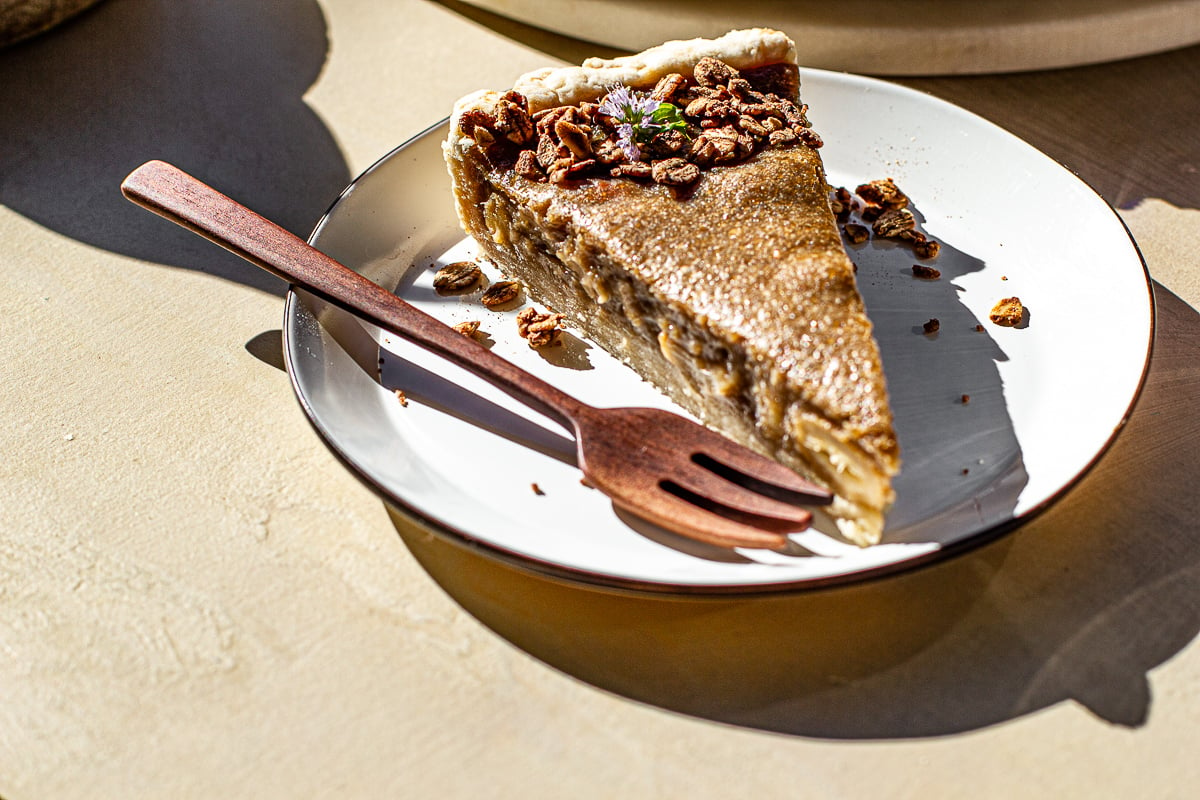 Lately I have been researching Filipino desserts that are not known in the mainstream, but more local to a specific town in the Philippines.  What I stumbled upon was a dessert called Binagol.

It’s made with grated taro, condensed milk, brown sugar and coconut milk.  It’s cooked over the stove top until it’s nice and thick and then poured into coconut shells and covered with banana leaves.  You then leave it to steam.

I made it a few months ago and after one bite everyone said it needs to be in a tart.  Some tweaks were made and now I am finally ready to share the tart recipe I created with the dessert.

Let’s start from the beginning with the Binagol like filling.  With me being me I made a healthier version of it.  Replacing the brown sugar with coconut sugar and the condensed milk with a smaller portion of coconut condensed milk.

When I first made the Binagol I grated the taro, but it didn’t thicken for me.  Because I replaced the regular condensed milk with the coconut condensed milk, it lost the ability to get to the right thick consistency.

With some trial and error, I found that steaming the taro first and then blending it up got it to the right consistency. 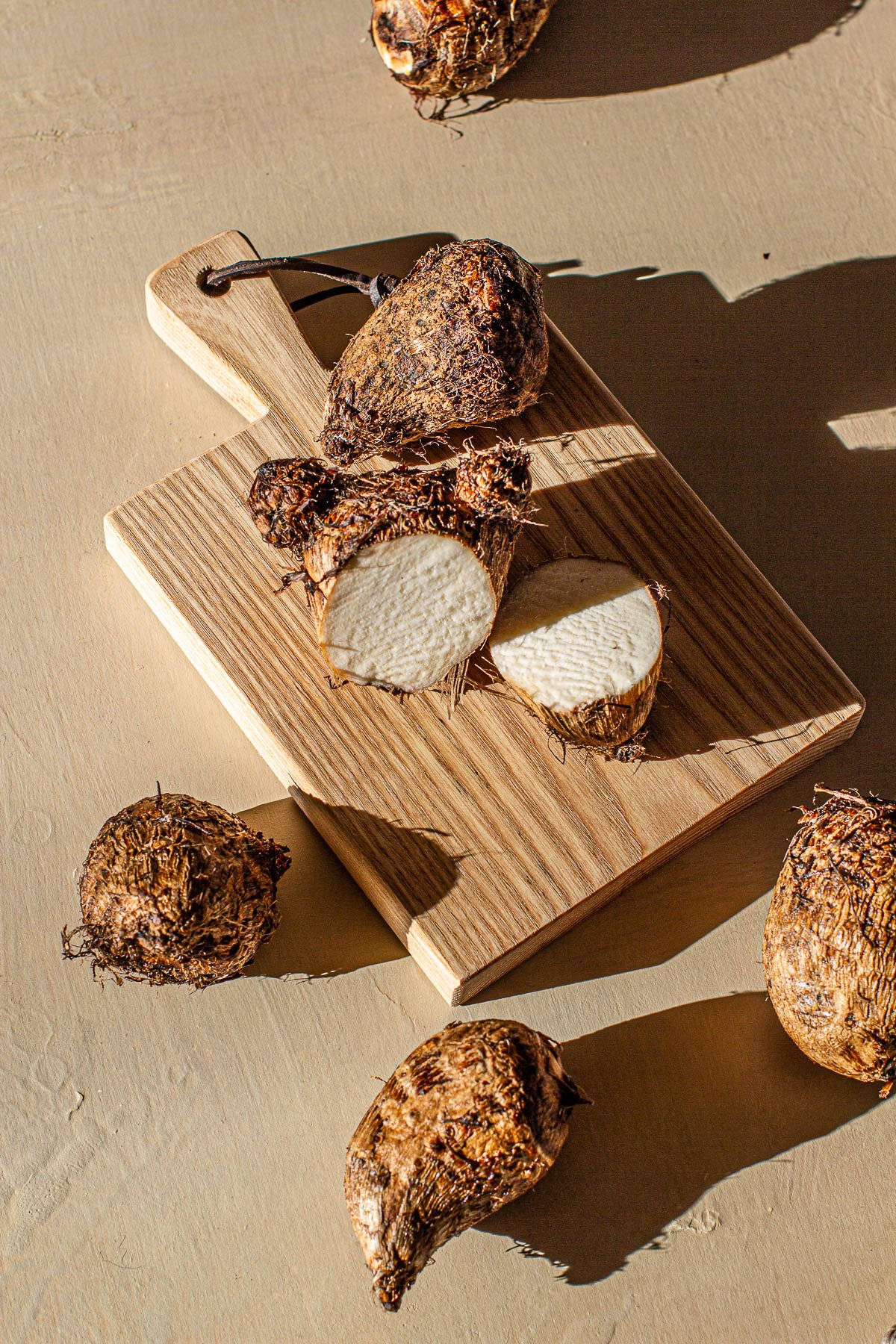 I used a food processor to blend it up and then added in the coconut sugar, milk and condensed milk.  That mixture is then poured into a large sauce pan to cook down.

Skipping this step is not recommended as you need this cook time to get it to that pudding consistency.  We are not using any eggs or binders here so please, trust me on this. 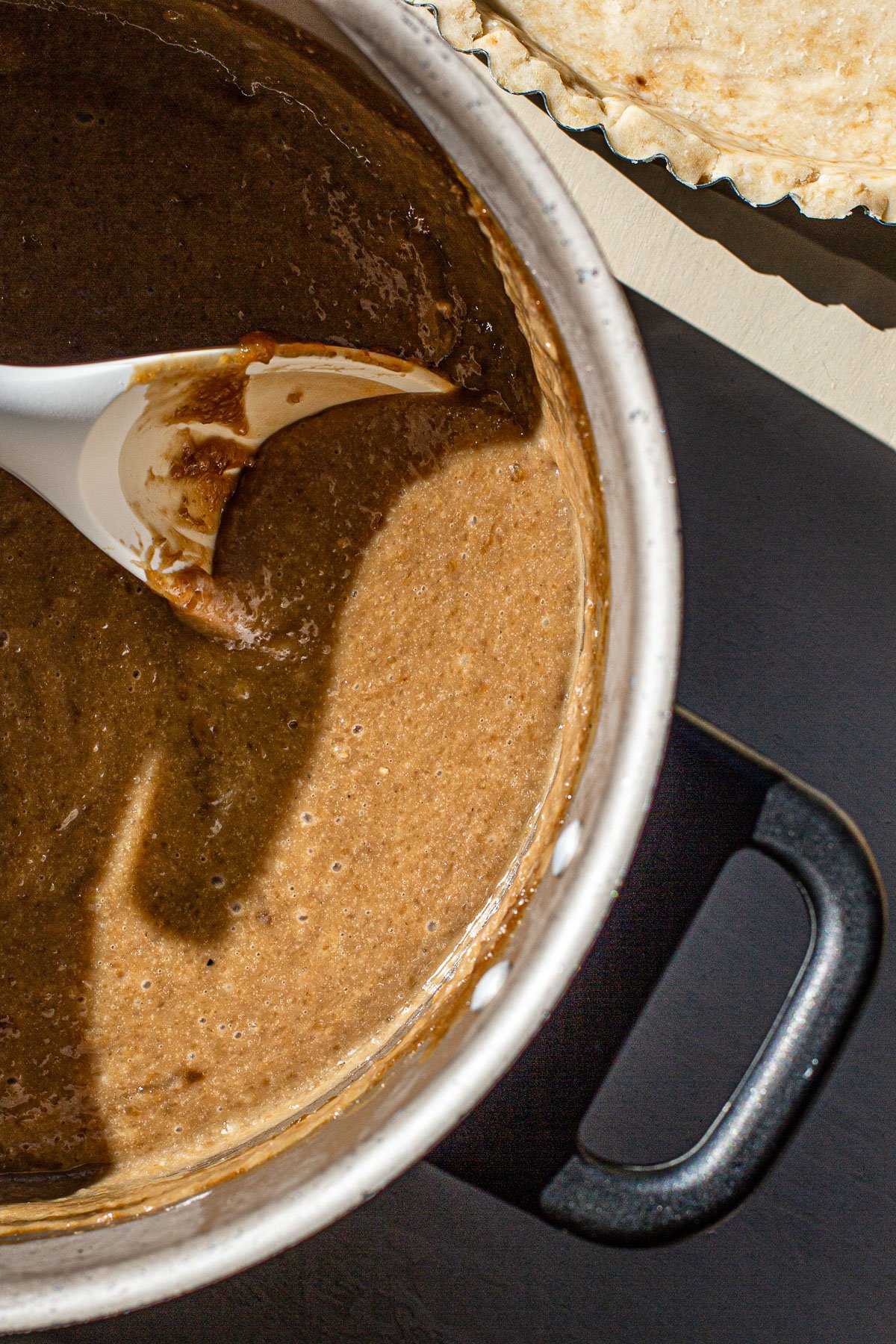 With Filipino dessert cooking, if you have every ventured in the traditional way of cooking, there is lots of standing and stirring at the stove.  As a kid that was my job.  Lucky me!  I talked about consistency earlier and we use the word  “makunat” to describe the texture we are looking for.  It’s almost rubber like and holds it’s shape when cooled.

Because we have lots of coconut oil in this recipe we want that the stage before that.  As if you over cook it the oils start extracting and then you have a very oily dessert.

Now with the mixture in the large sauce pan turn the heat down to low and we are going to keep stirring until you run a spoon down the middle and a little river holds up.  I posted how it should look like in my stories.

Leave it to cool down fully before you pour into the tart shell.

I used my go to Vegan Crust.  Make it while the filling is cooling.  Again throw everything in a blender and then wrap the dough in cling wrap and leave to chill for about 30 minutes.

Roll it out until it’s about 1 cm thick.  Place the dough in a 10 inch tart pan and lightly press into the bottom and the groves.

Now you blind bake.  What is blind baking you ask?  It’s when you cook tart dough on it’s own to dry out before pouring in the filling.  It’s protection against a soggy bottom.  No one wants a soggy bottom tart or otherwise!

To blind bake you dock the dough by pricking the dough with a fork.  This prevents the dough from puffing up when baking.  To ensure that the tart dough does not puff up, cover it with some parchment paper and then fill the cavity with some rice or beans to weigh it down.

Blind bake for 12 minutes at 350 degrees.  Take out the oven and remove the rice or beans and the parchment and leave to cool.

Now once all the components are all the same temperature, we put it all together. 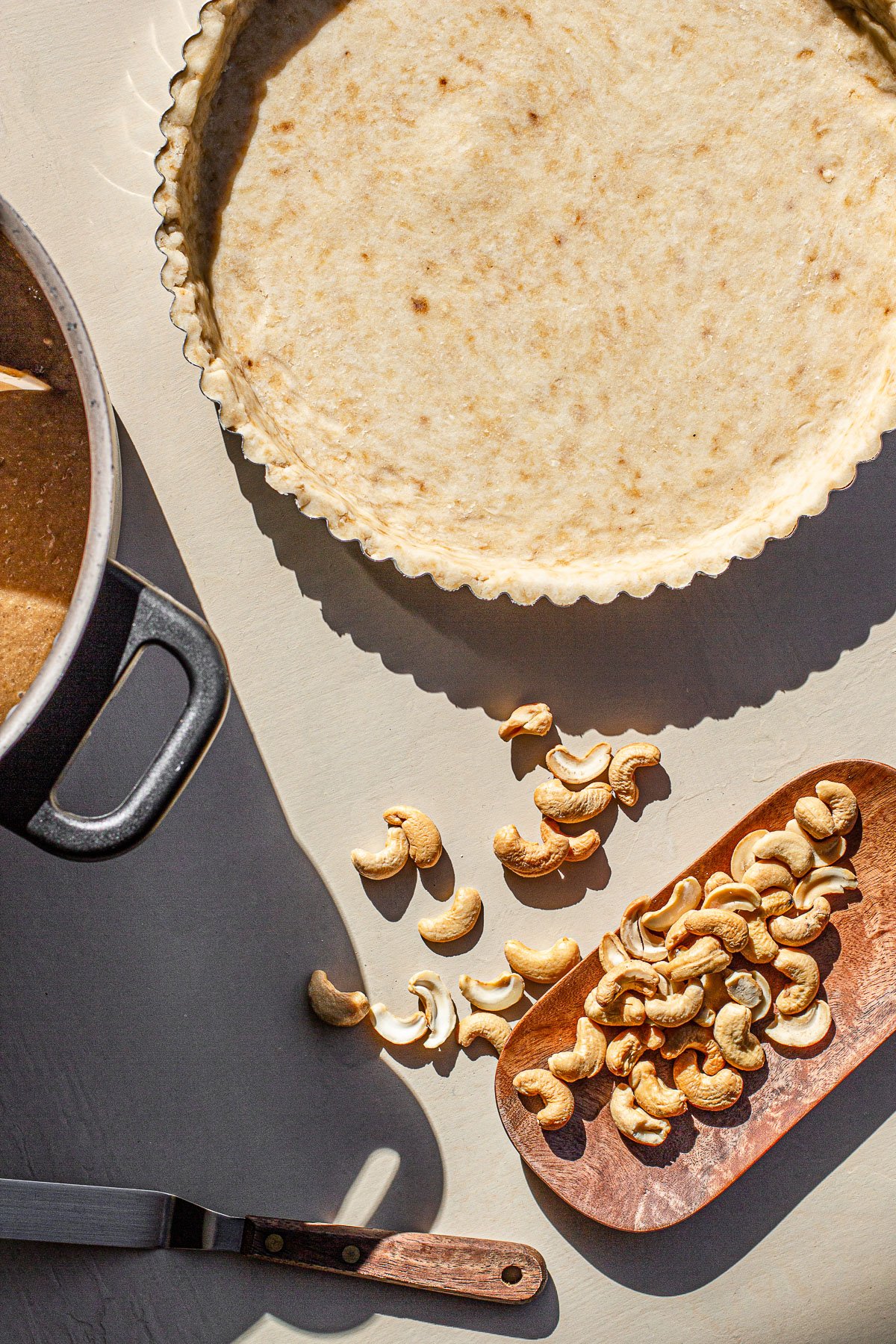 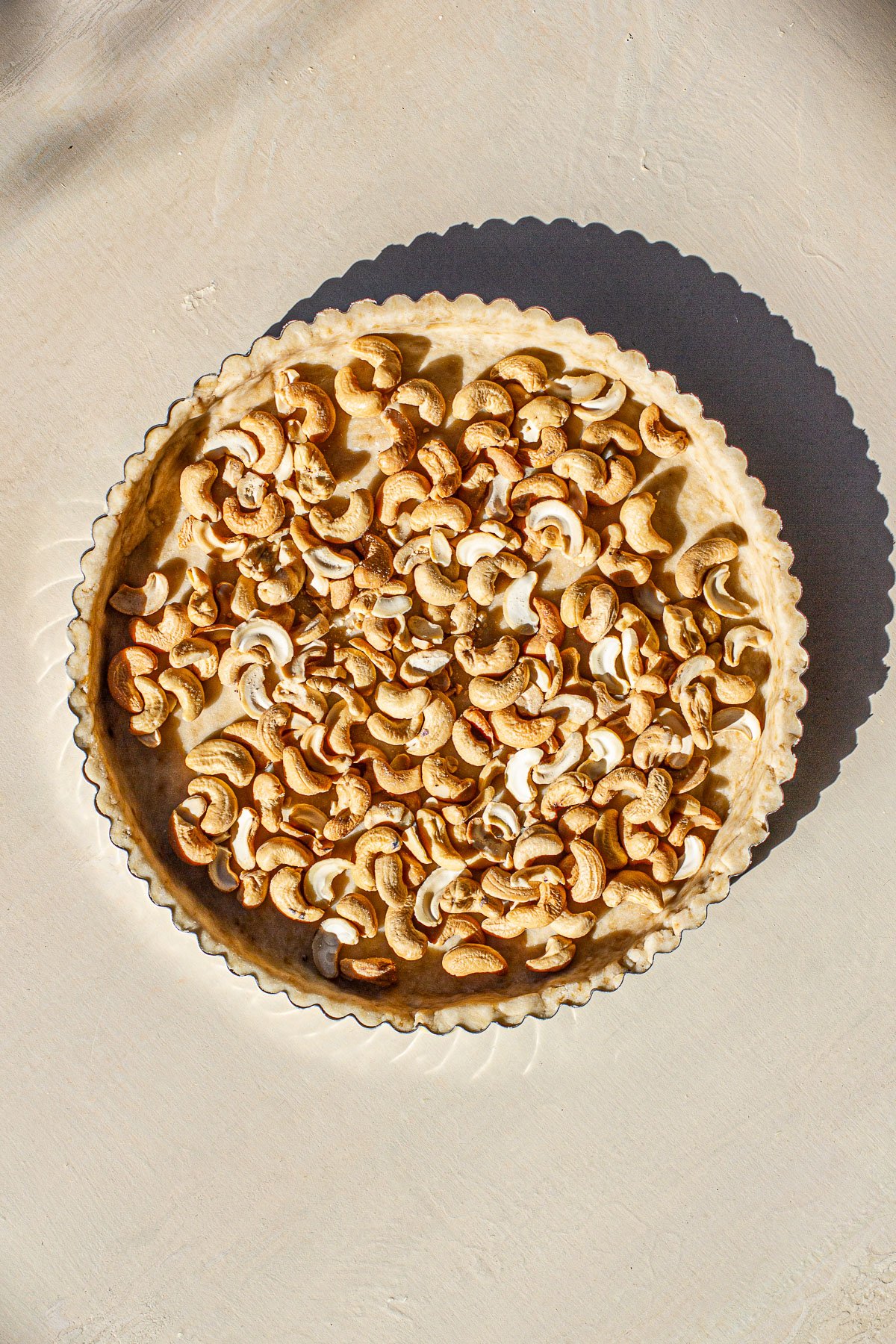 Then spoon in the filling over the top. 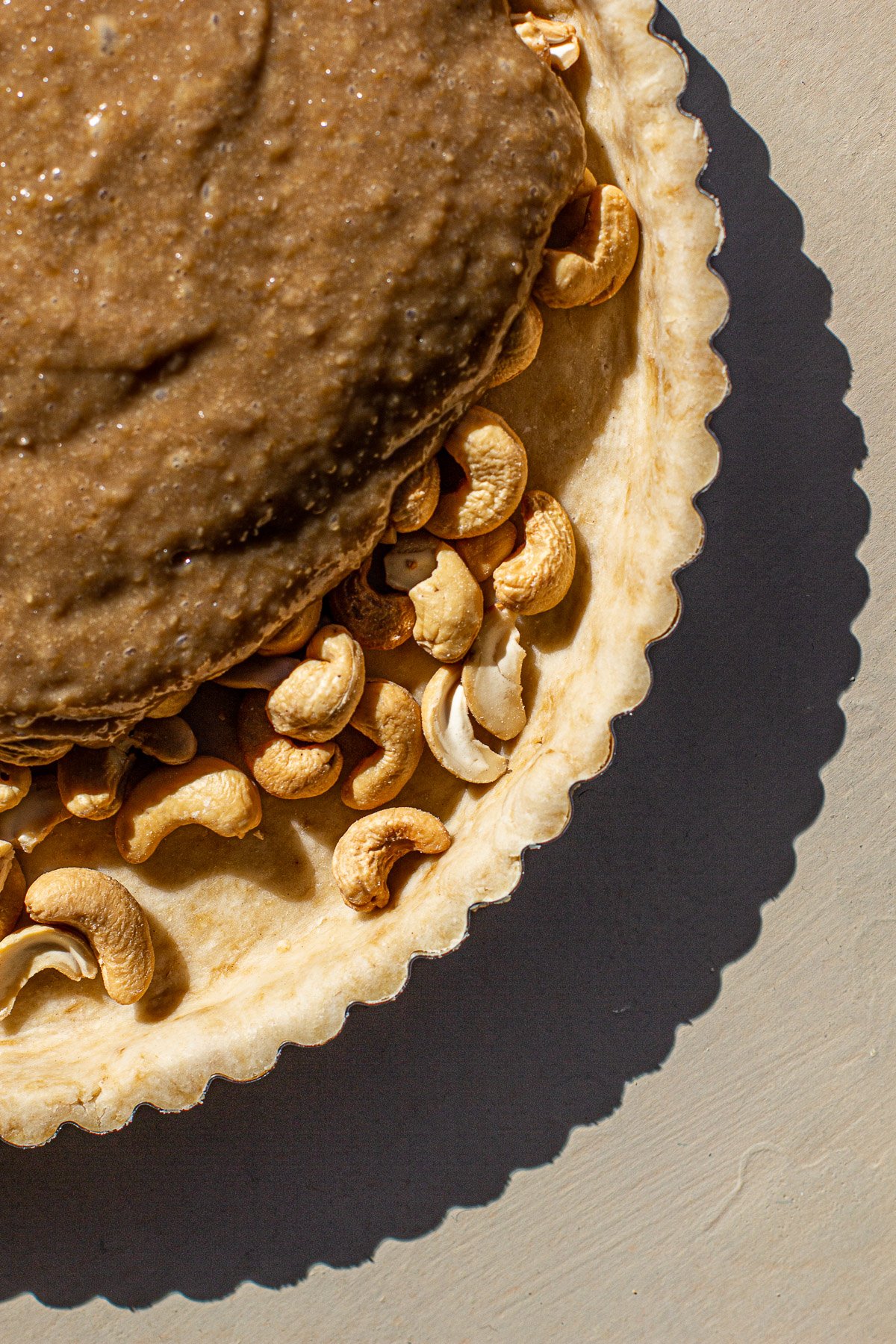 Spread until it’s nice and even and the cashews are fully covered. 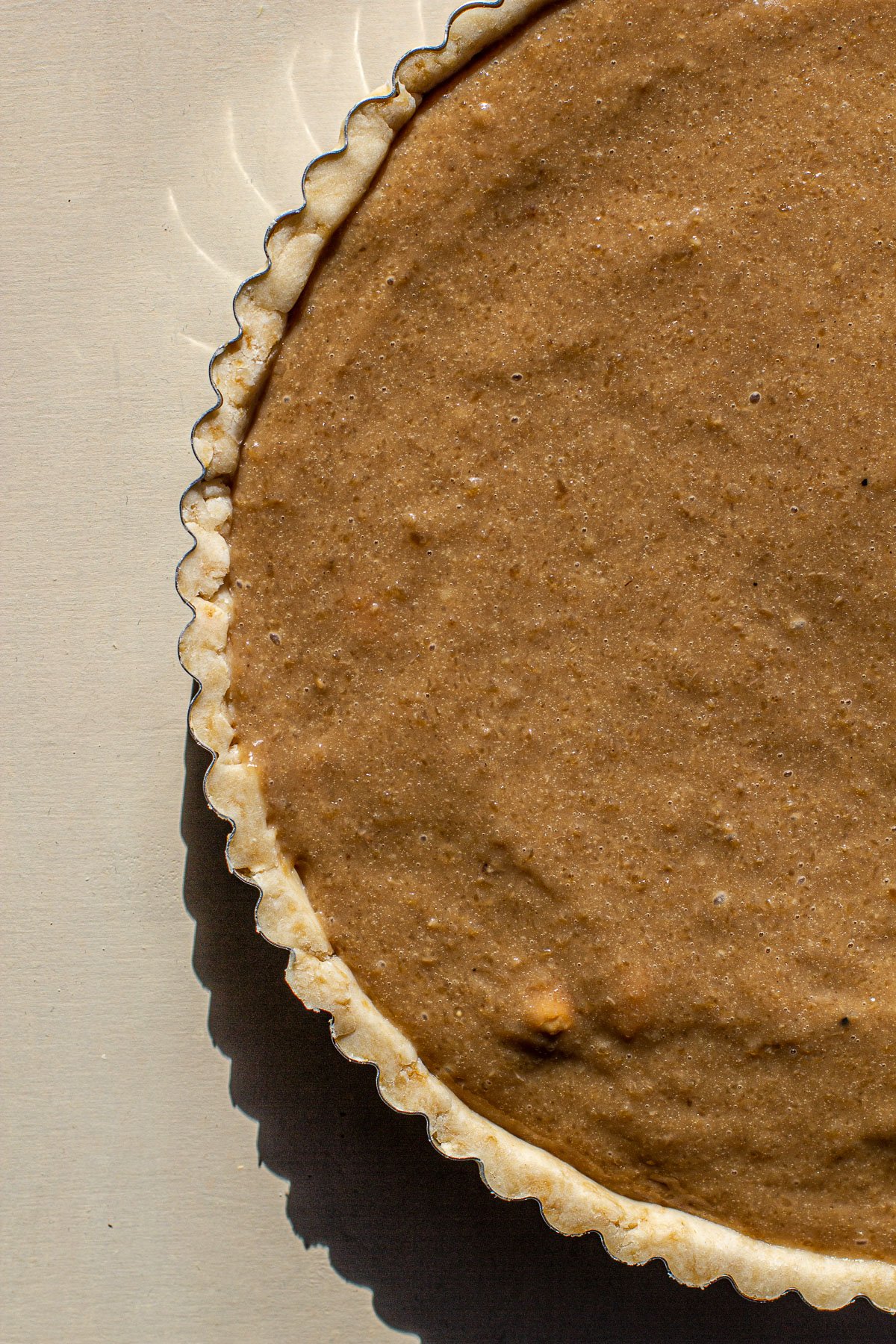 Bake for 20 minutes at 350 degrees and leave the pie to cool fully again before decorating. 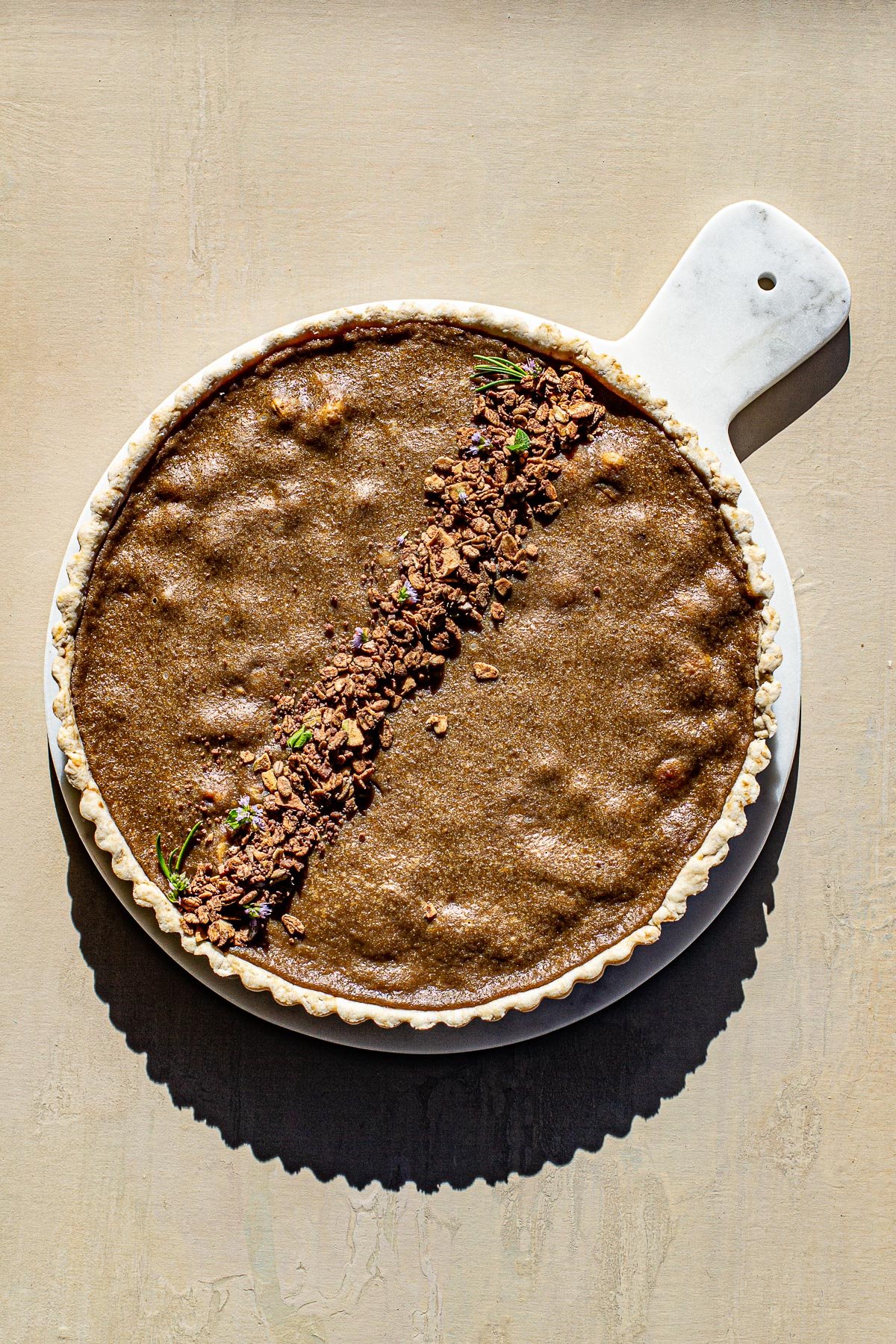 To decorate the tart I just used what I had which was:

You don’t need much.  I used at the most 2 tablespoons of granola and just a pinch or two of salt.  The herbs was also quite minimal.  Just a little here and there for a pop of color. 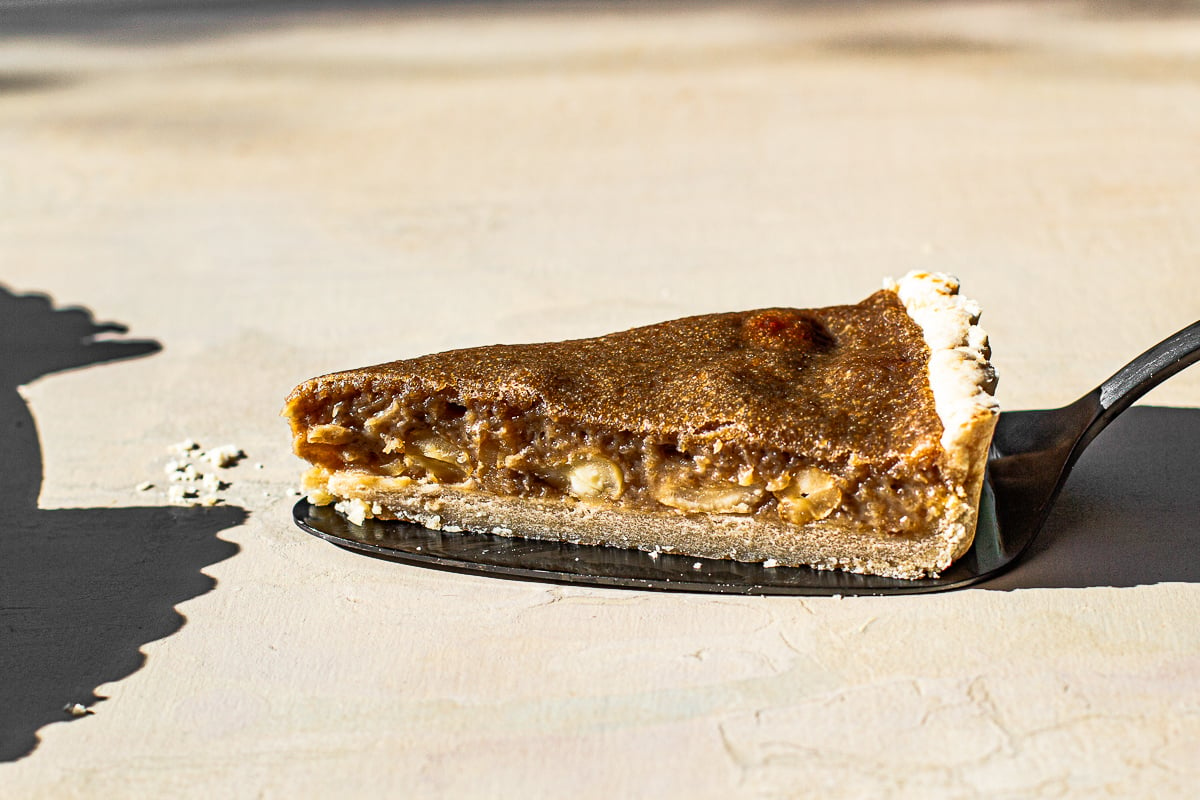 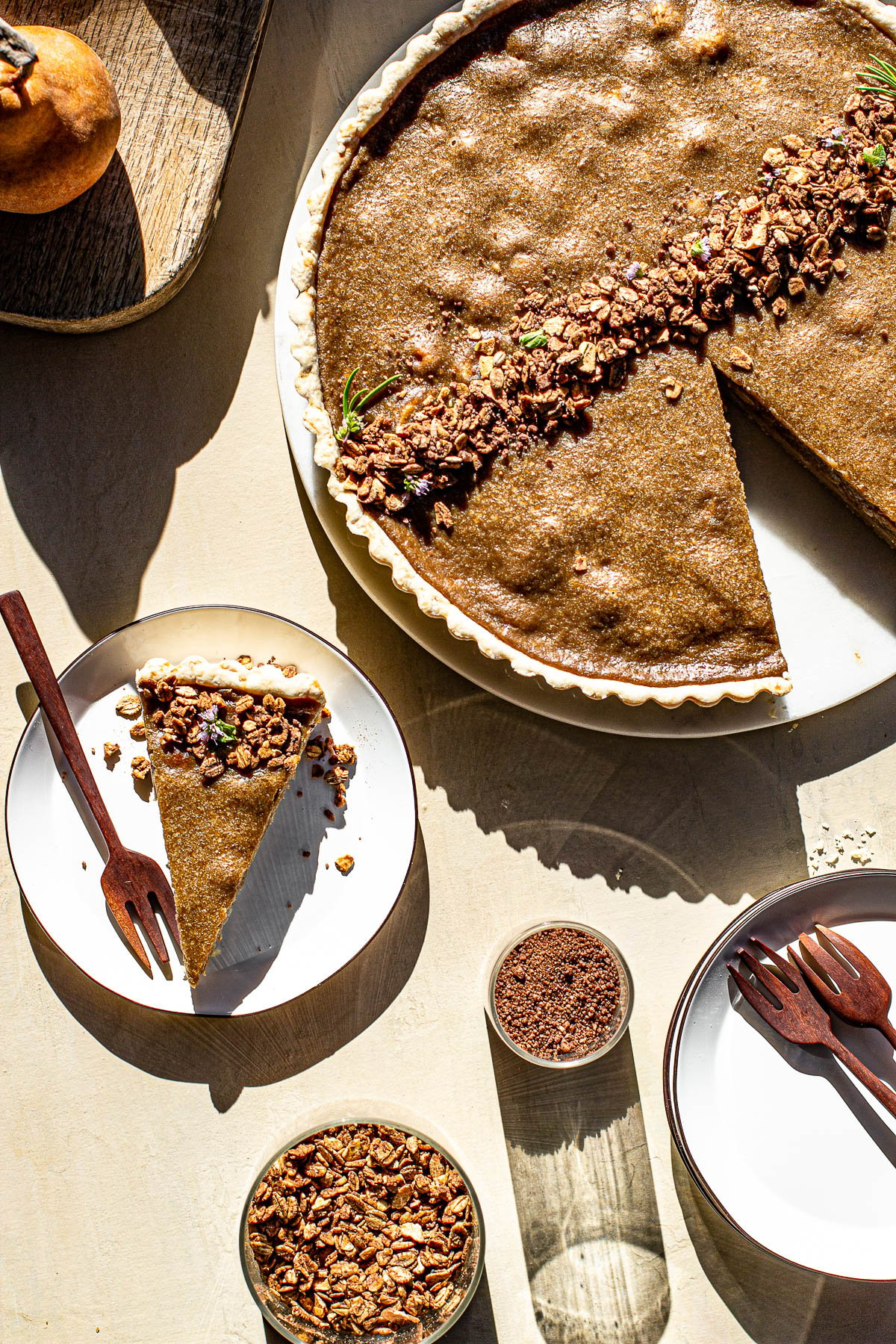 There  you have it.  It’s not simple by any means, but if you are after something different, this is the tart to make. 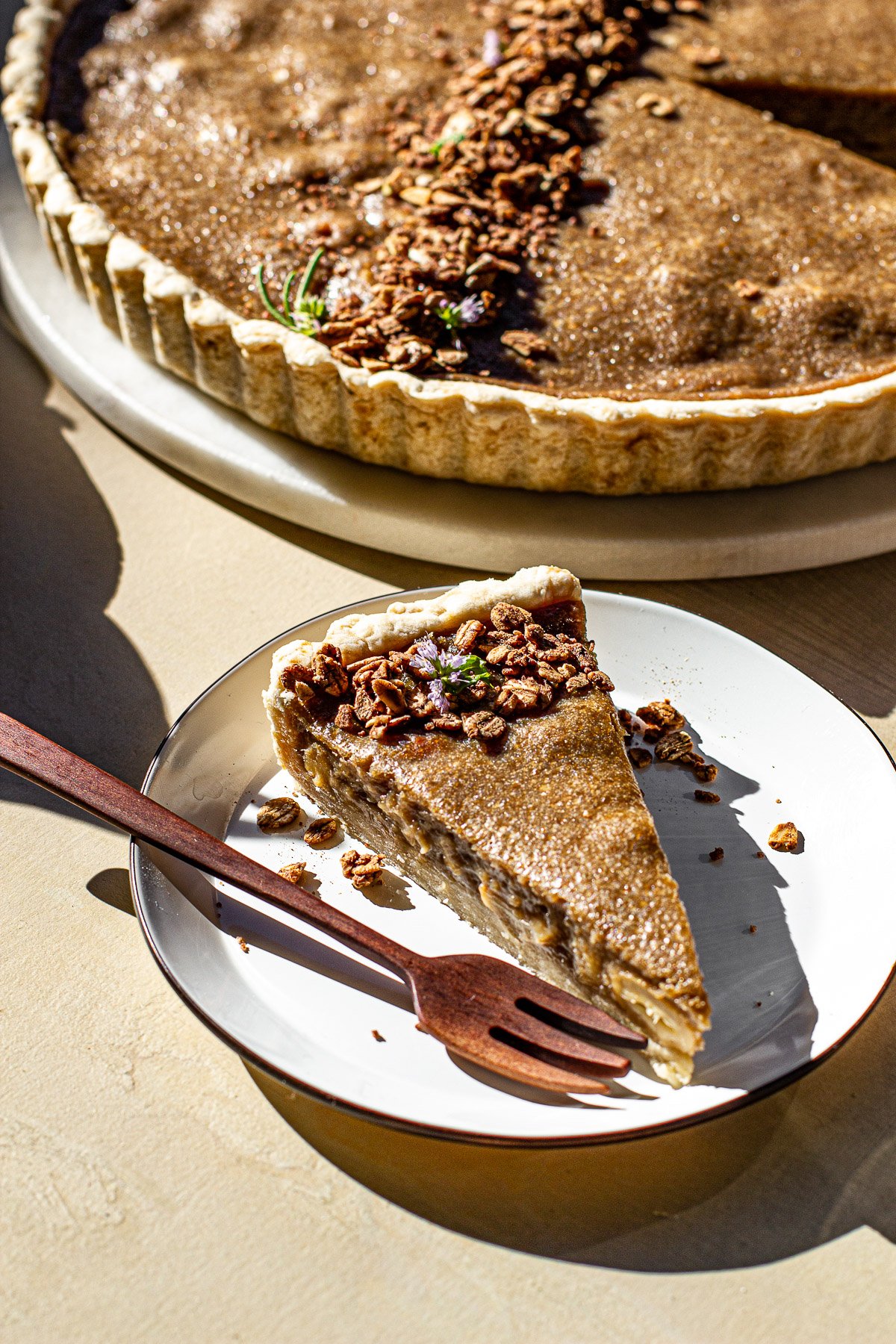 Go ahead and impress some friends and family.  Make this Vegan Cashew Tart!!!

Other Pies and Tarts For Holiday Consideration

For more healthy Filipino inspired goodness in your life follow along on Instagram, Facebook or Pinterest.  Or subscribe to get these recipes in your inbox.  And if you make this Vegan Cashew Tart with a Taro Coconut Filling I would love to see it.  Tag your Instagram snaps with @rezelkealoha and #rezelkealohaeats. 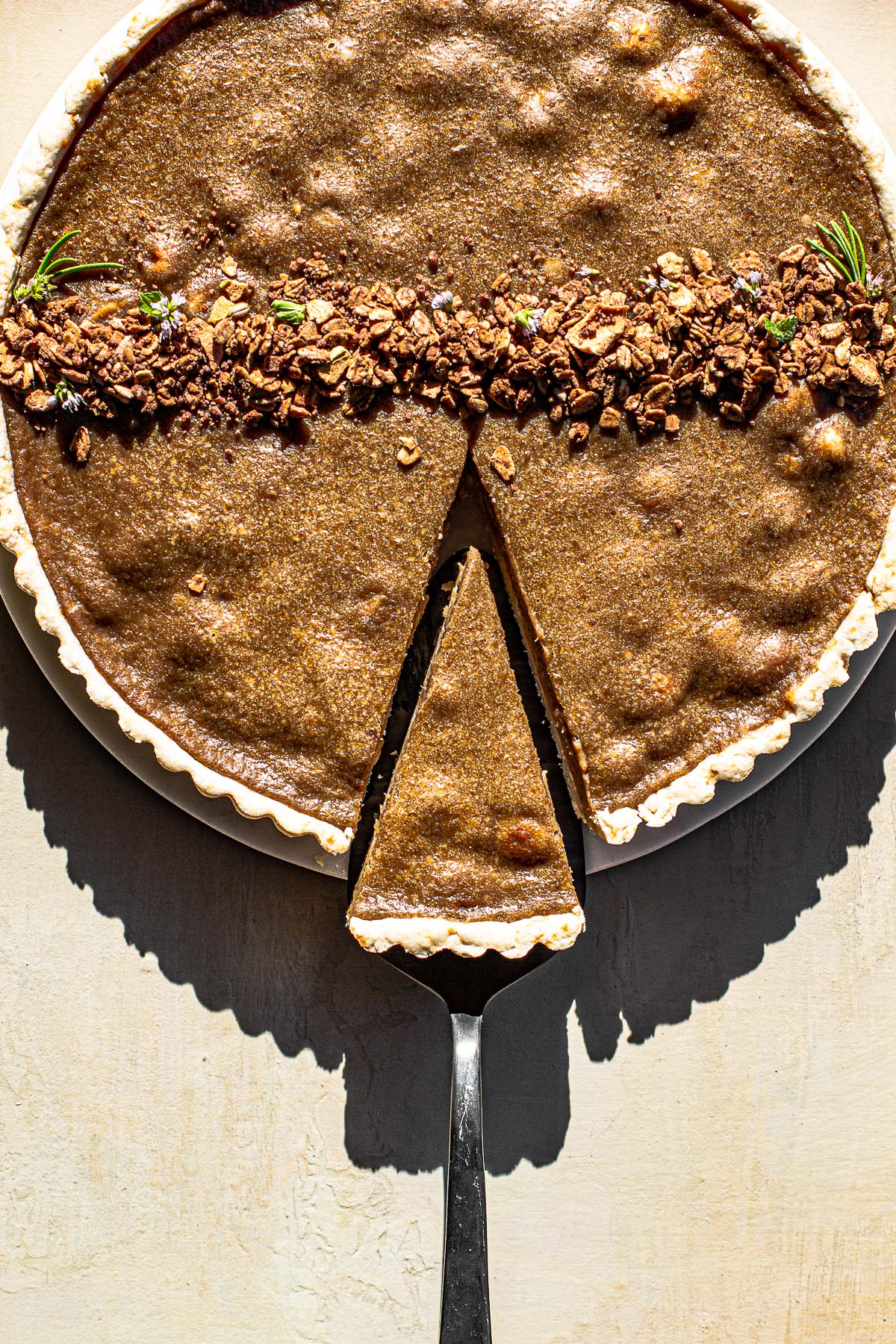 Put it all Together