Afritada is a Filipino style stew cooked in a lush tomato broth.  In this recipe we turned it into a Shepard’s Pie by using minced chicken stewed with green bell peppers, chickpeas and fresh tomatoes. 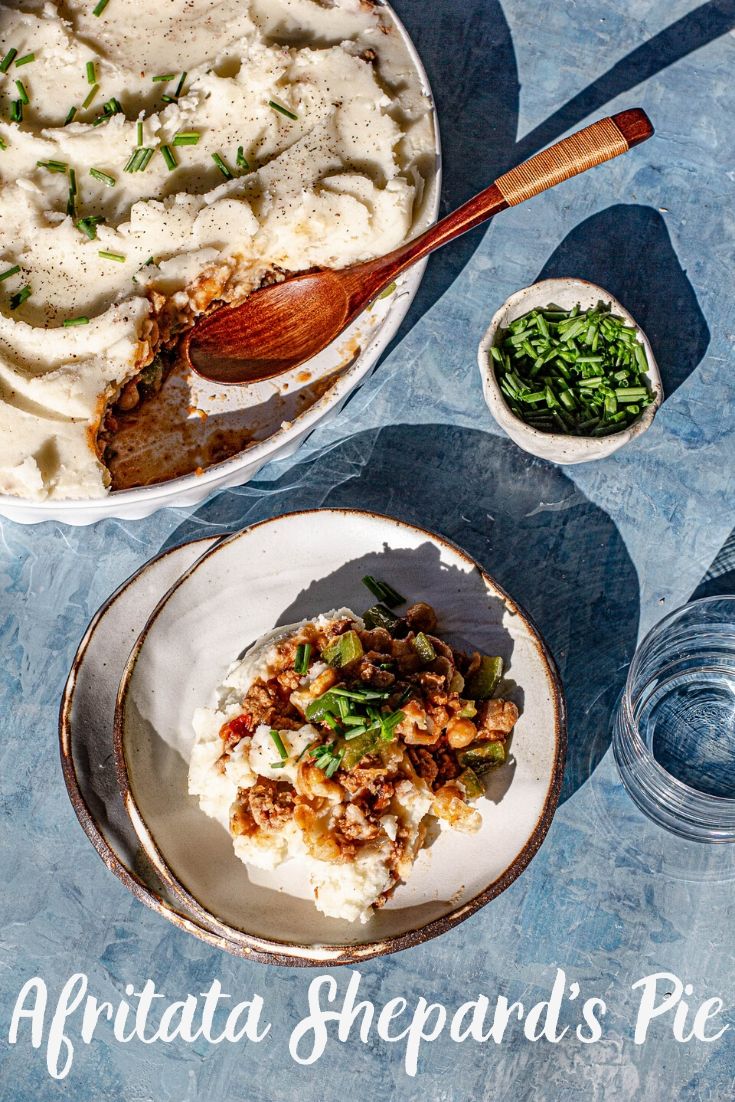 Afritada came to the Philippines during the Spanish Colonization.  The name is derived from the Spanish word Fritata which means fried.  Frying is done in each step of the recipe.  Once all the ingredients are fried and crispy it’s then left to stew with fresh tomatoes. This dish is considered an everyday food that is on rotation on a weekly basis at a Filipino table.

With me being me I wanted to make a new spin on it.  Traditionally it is made with chicken thighs, carrots, bell peppers and potatoes.  I swapped out the thighs to mince and took out the carrots because yuck.  Then whipped up the potatoes instead and made it into a Shepard’s Pie! I have to say it turned out pretty good!

Step 1 – Fry all the food & Make the Mashed Potatoes

Not deep fry, but a light fry in some olive oil.  Start with the chickpeas and season it with some salt and pepper, then follow with the green bell peppers.  Set both to the side while cooking the chicken mince with onions, garlic and fresh tomatoes.

While the chicken was cooking have 3 potatoes in a steamer getting nice and soft.  Around the same time the chicken finished cooking turn off the heat to both and drain the potatoes.  Put them back into the pot and mashed it up with vegan butter and vegan milk.  Transfer to a bowl and set aside until later. 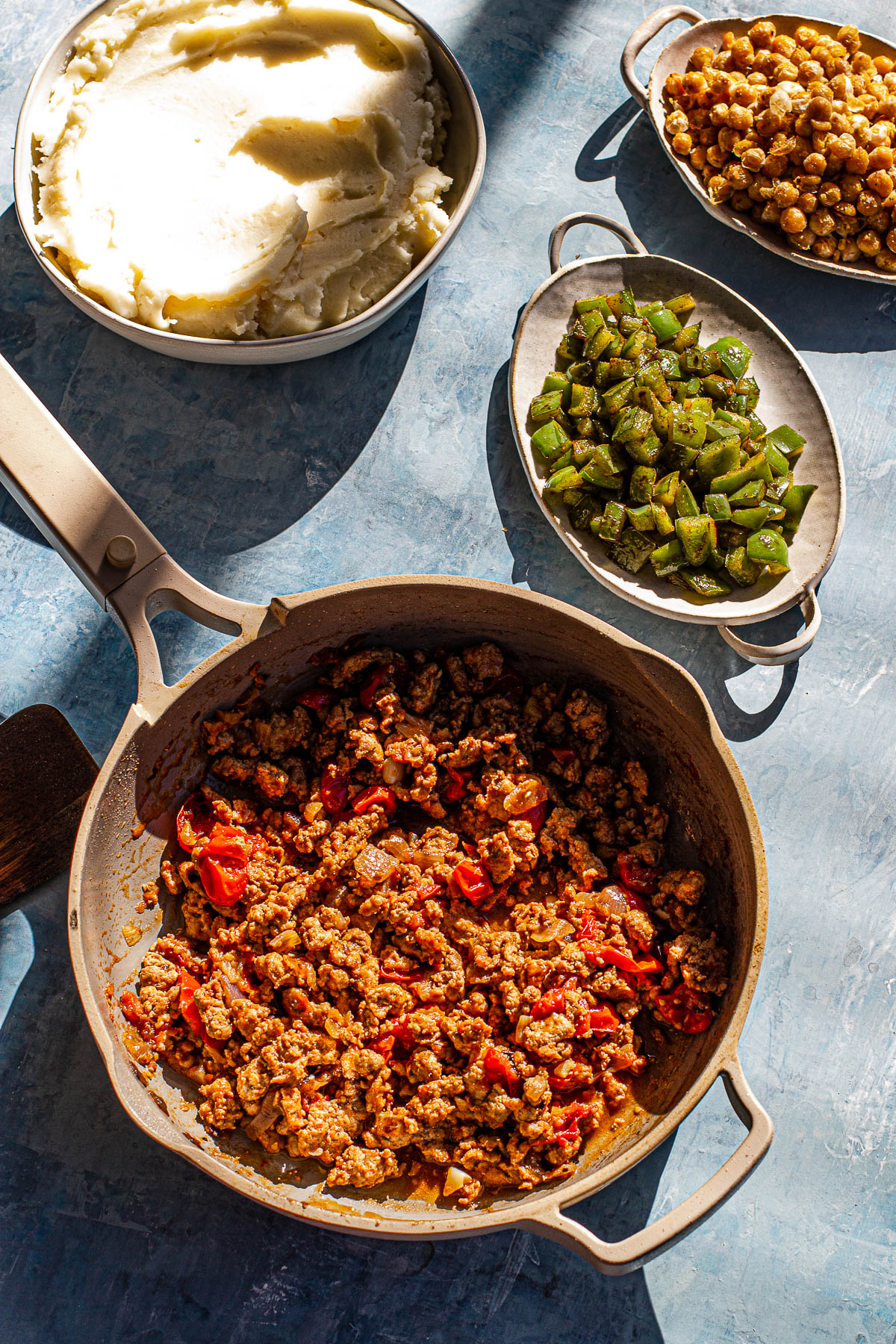 After everything is all cooked individually, add everything to the chicken mince.  First the green bell peppers. 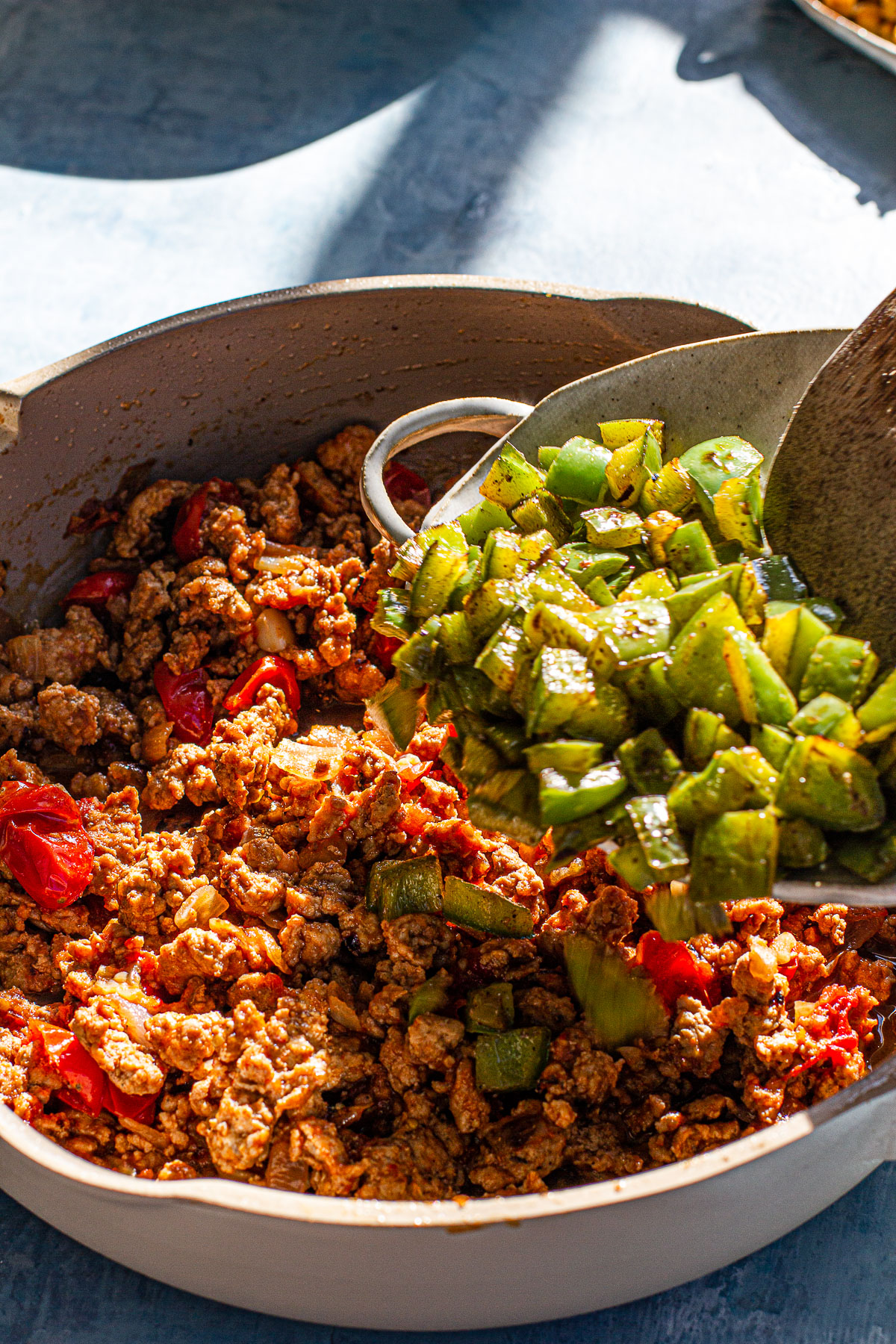 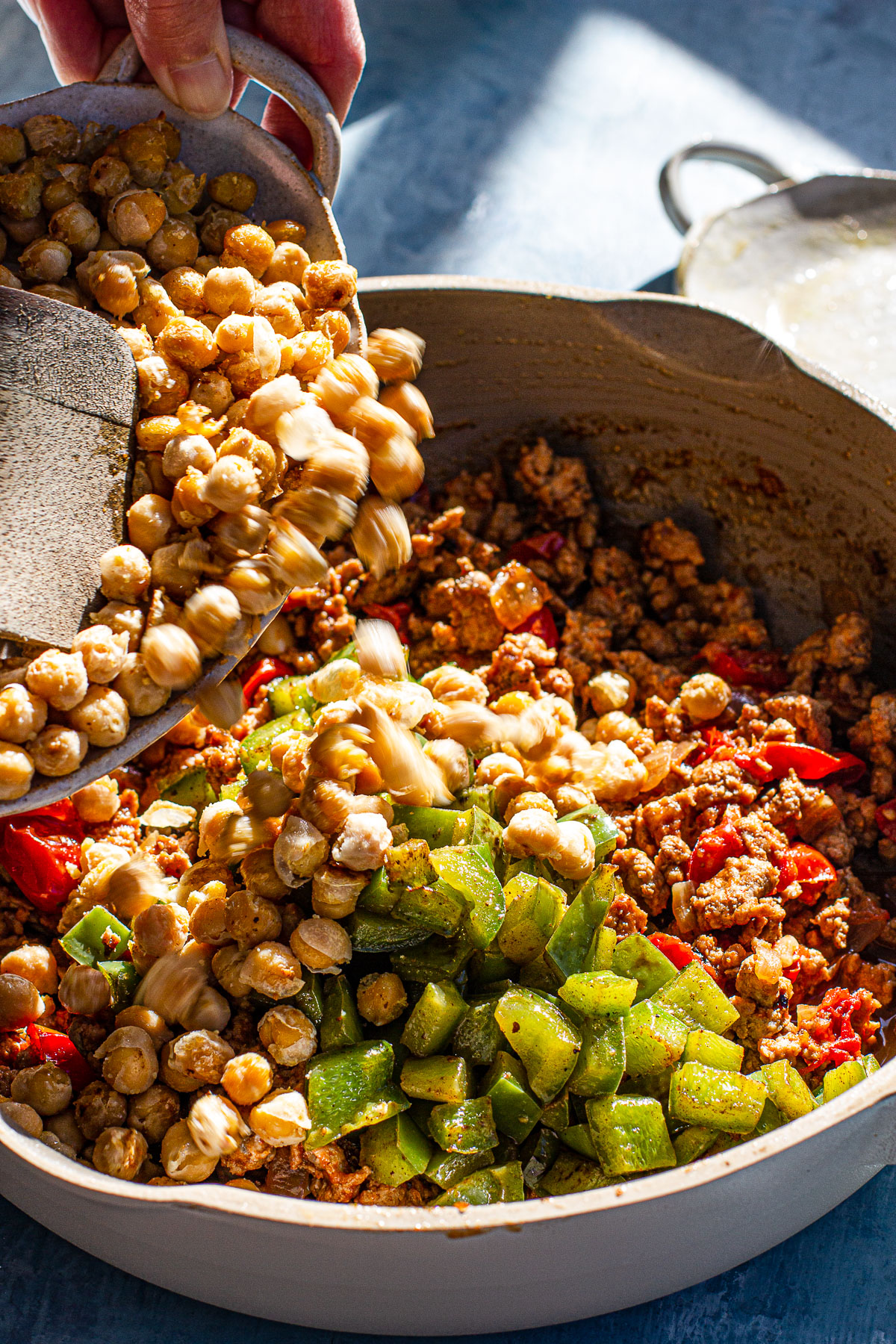 Then stir it all together. 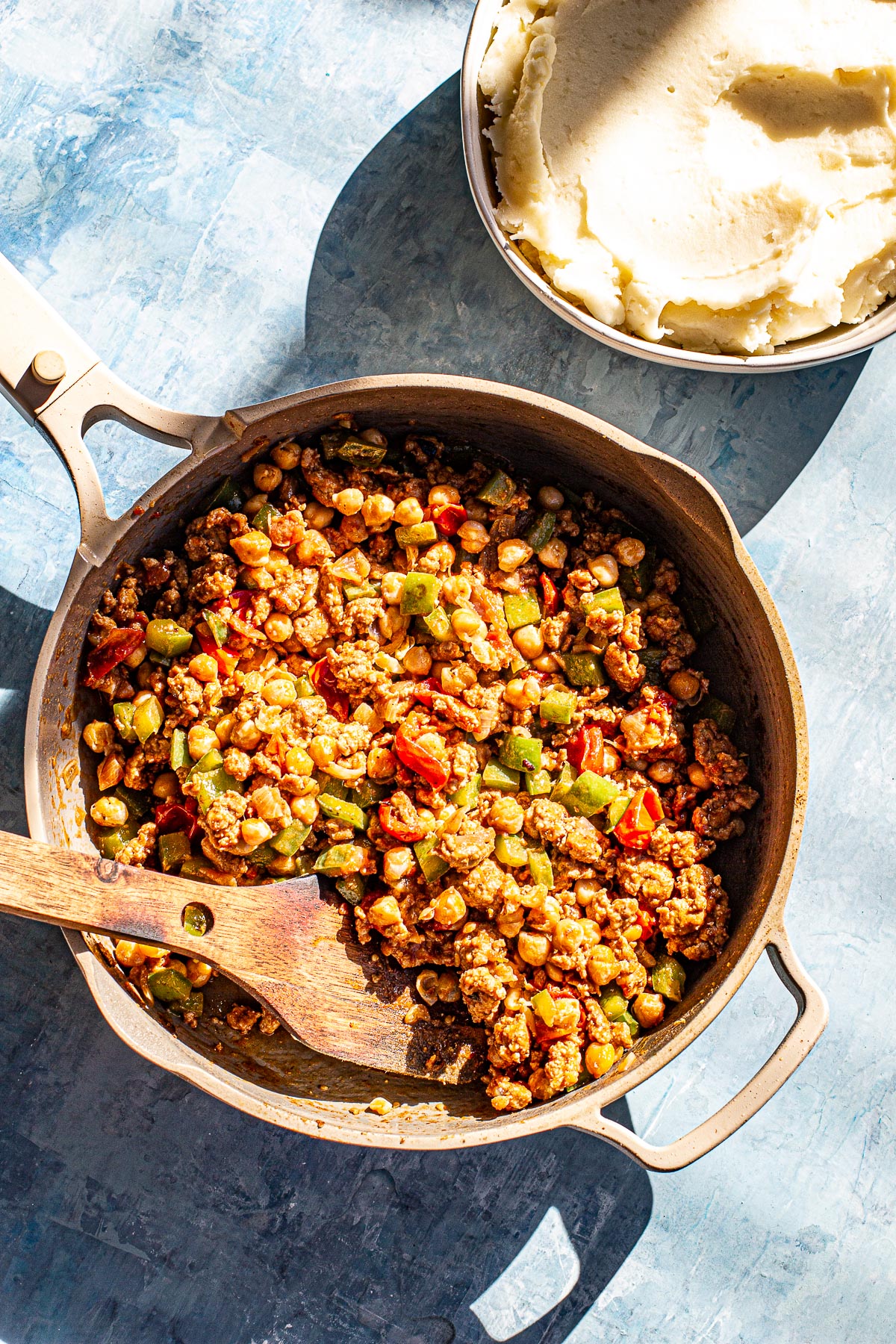 Step 3 – Transfer to a Serving Dish

Once you have mixed all the ingredients together, transfer it all into a large dish. 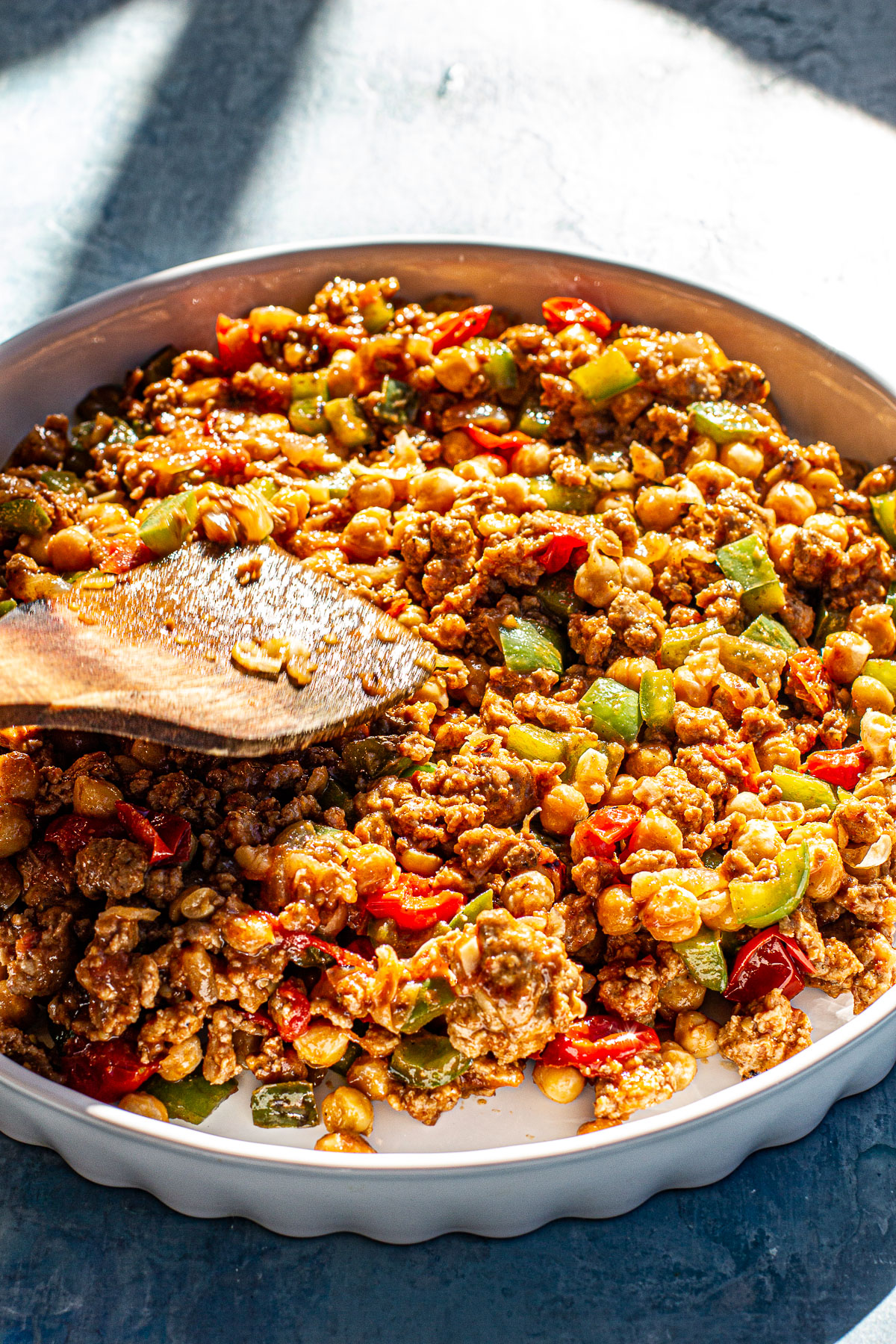 Making sure it’s all even and all the way to the edge like so. 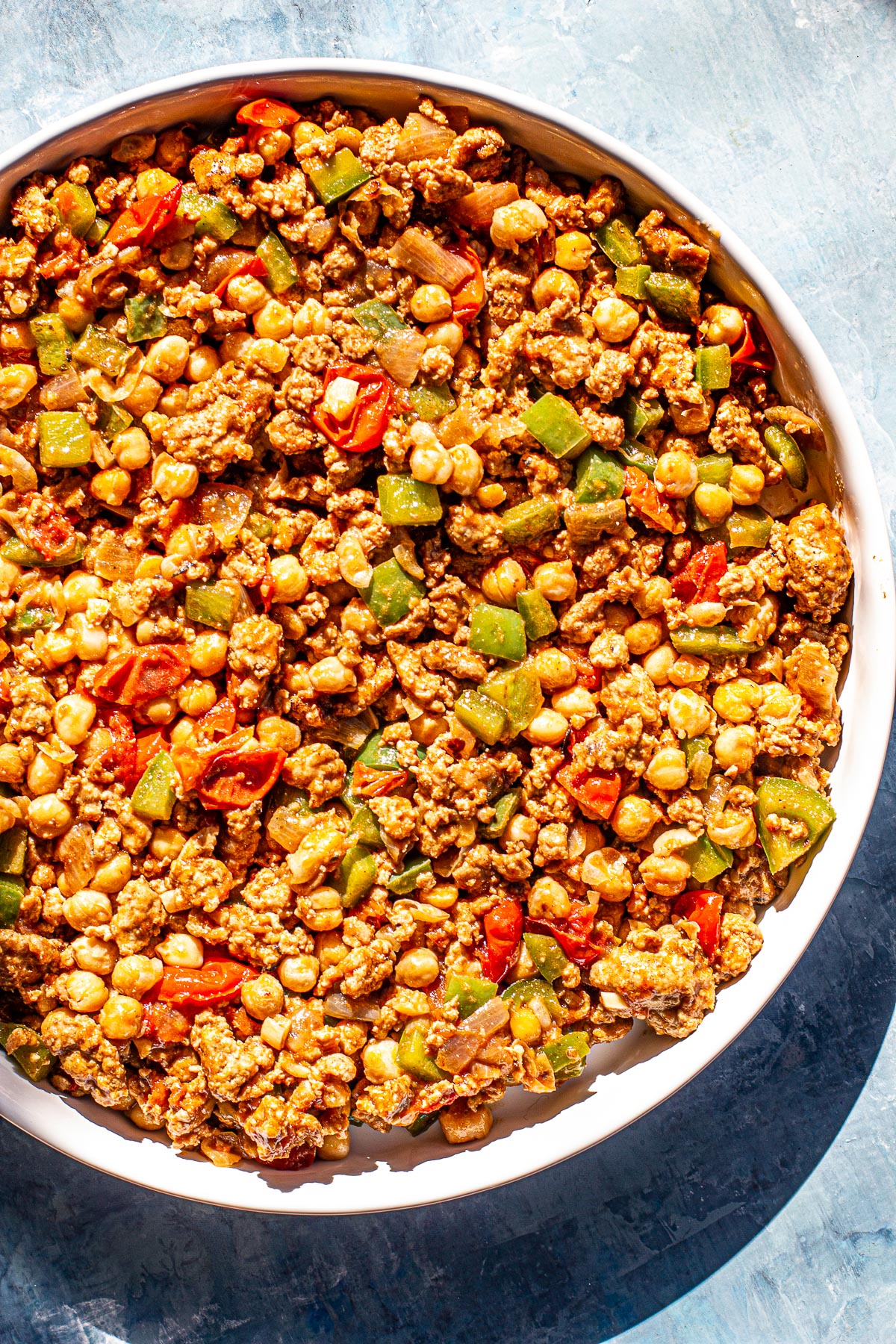 The most important part of Shepard’s Pie is the carpet of mashed potato, so we add then now.  I like to add it in big clumps like this. 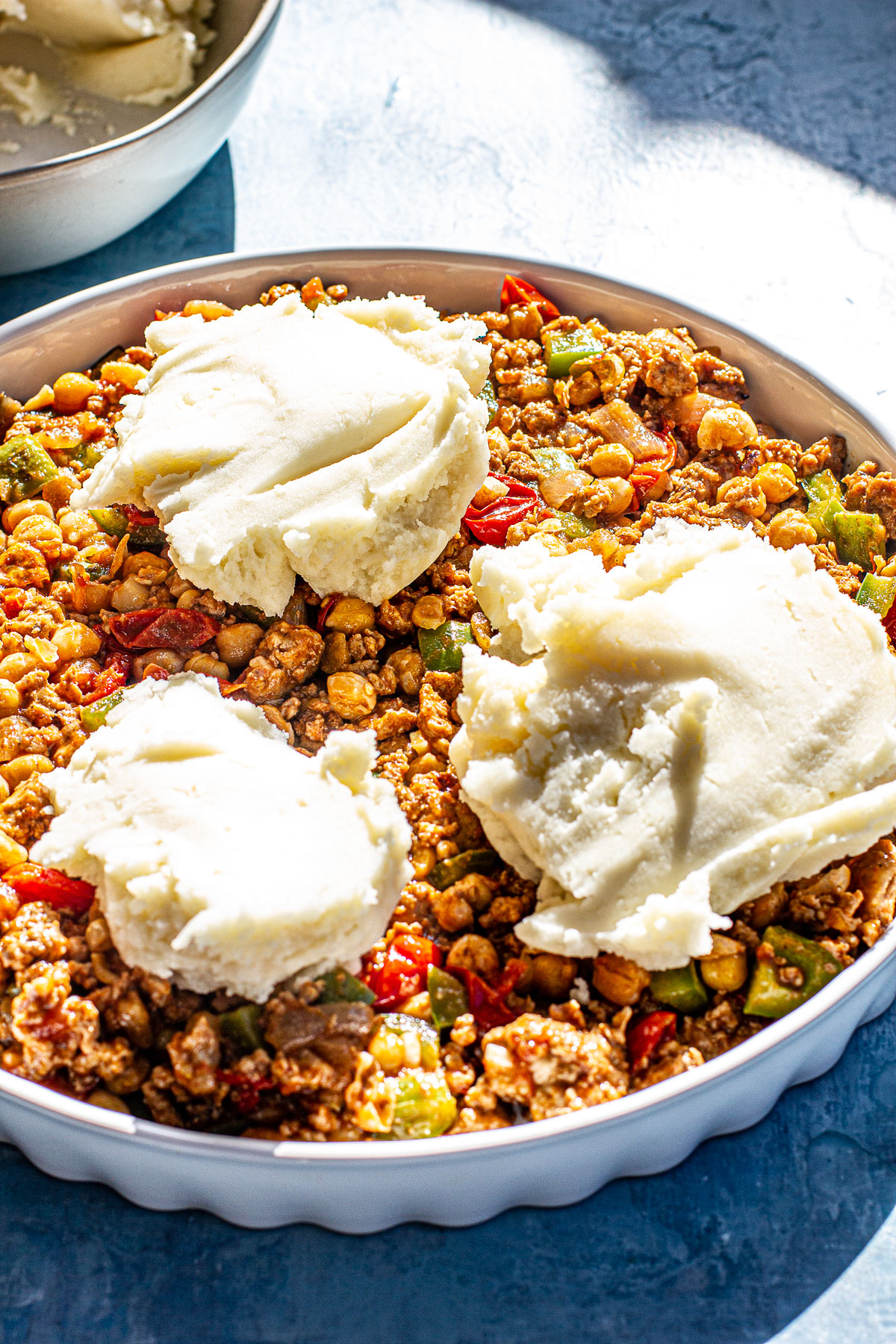 Then use a spatula to spread it all over the top of the Afritata. 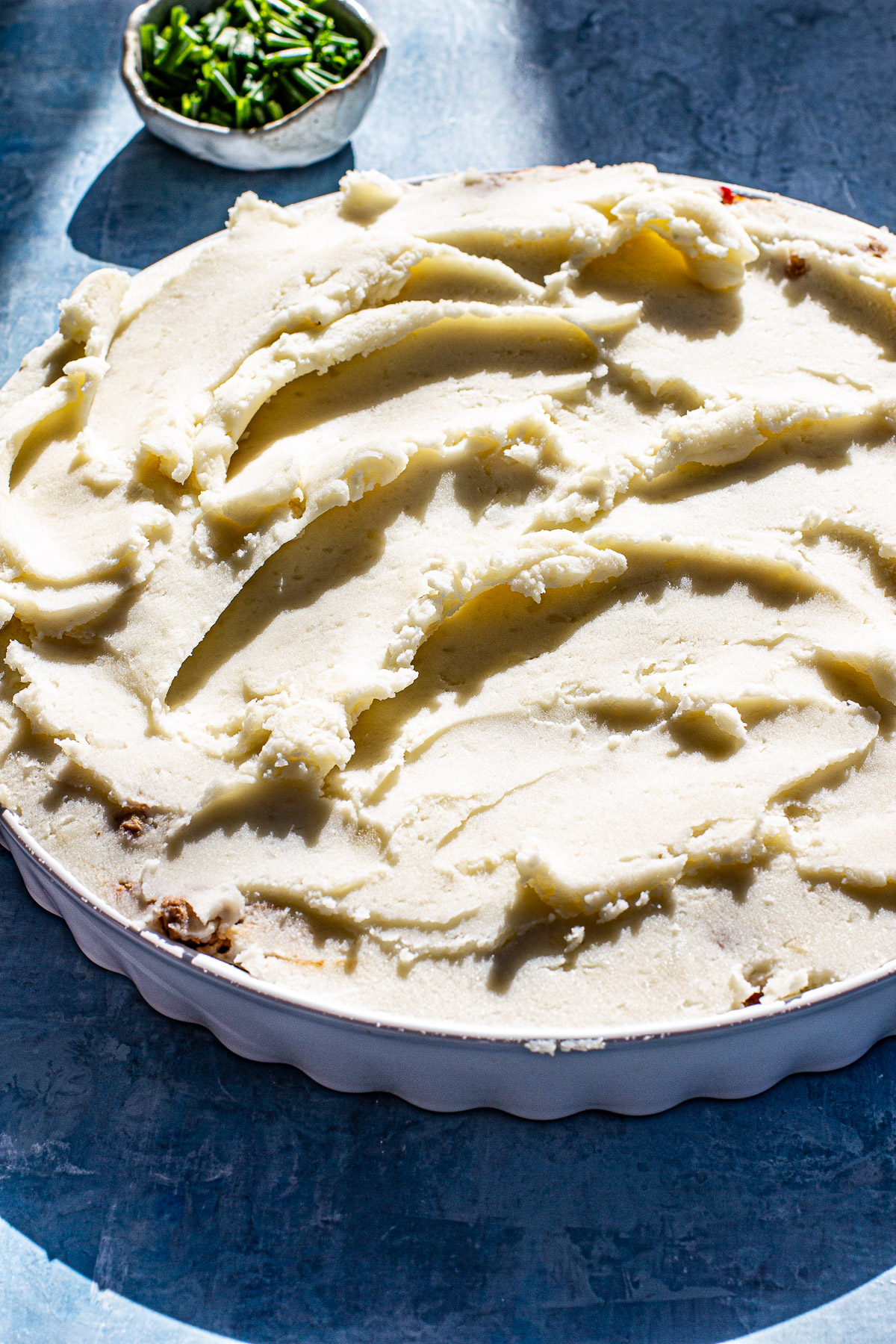 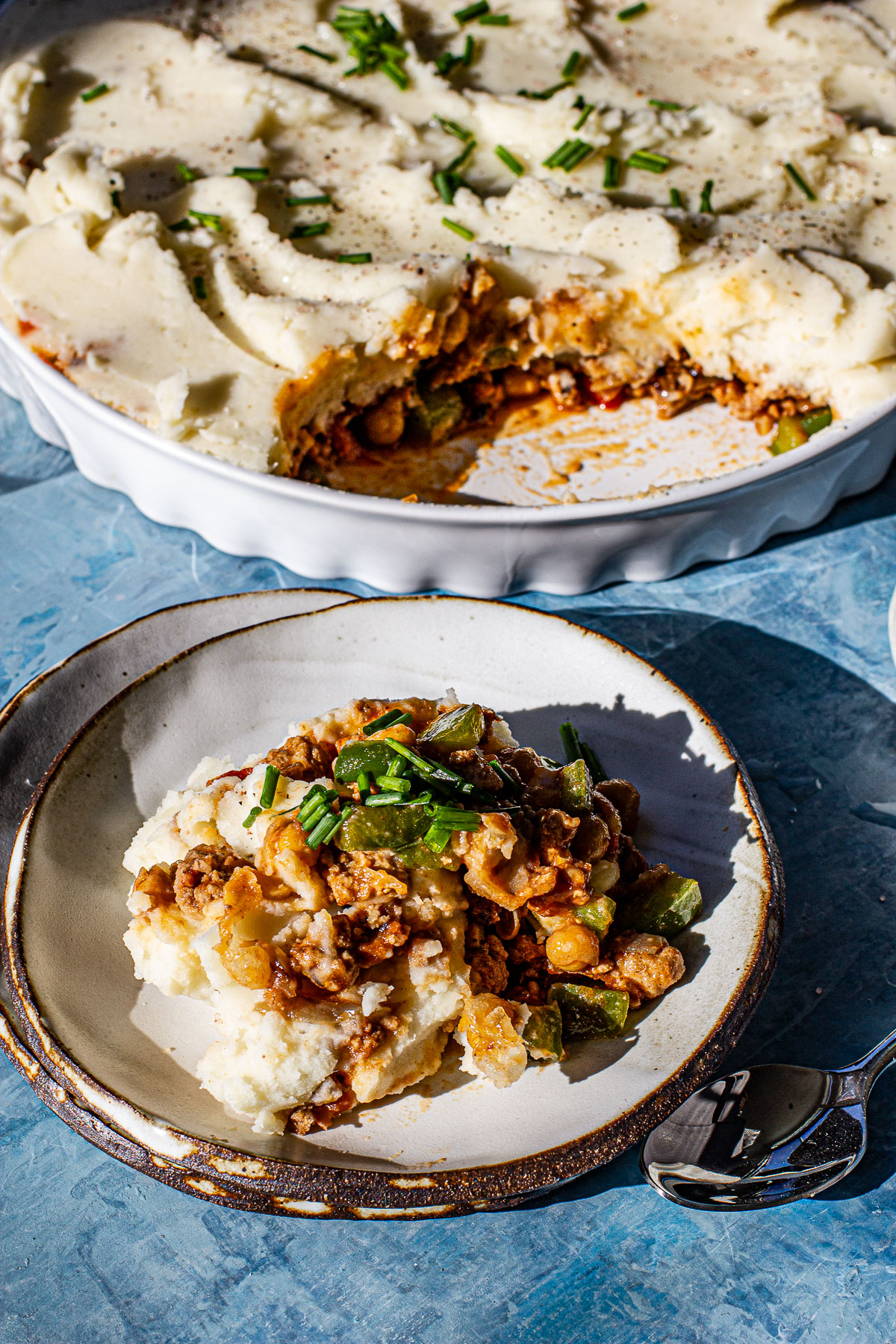 Scoop some up and serve with a nice leafy green salad on the side. 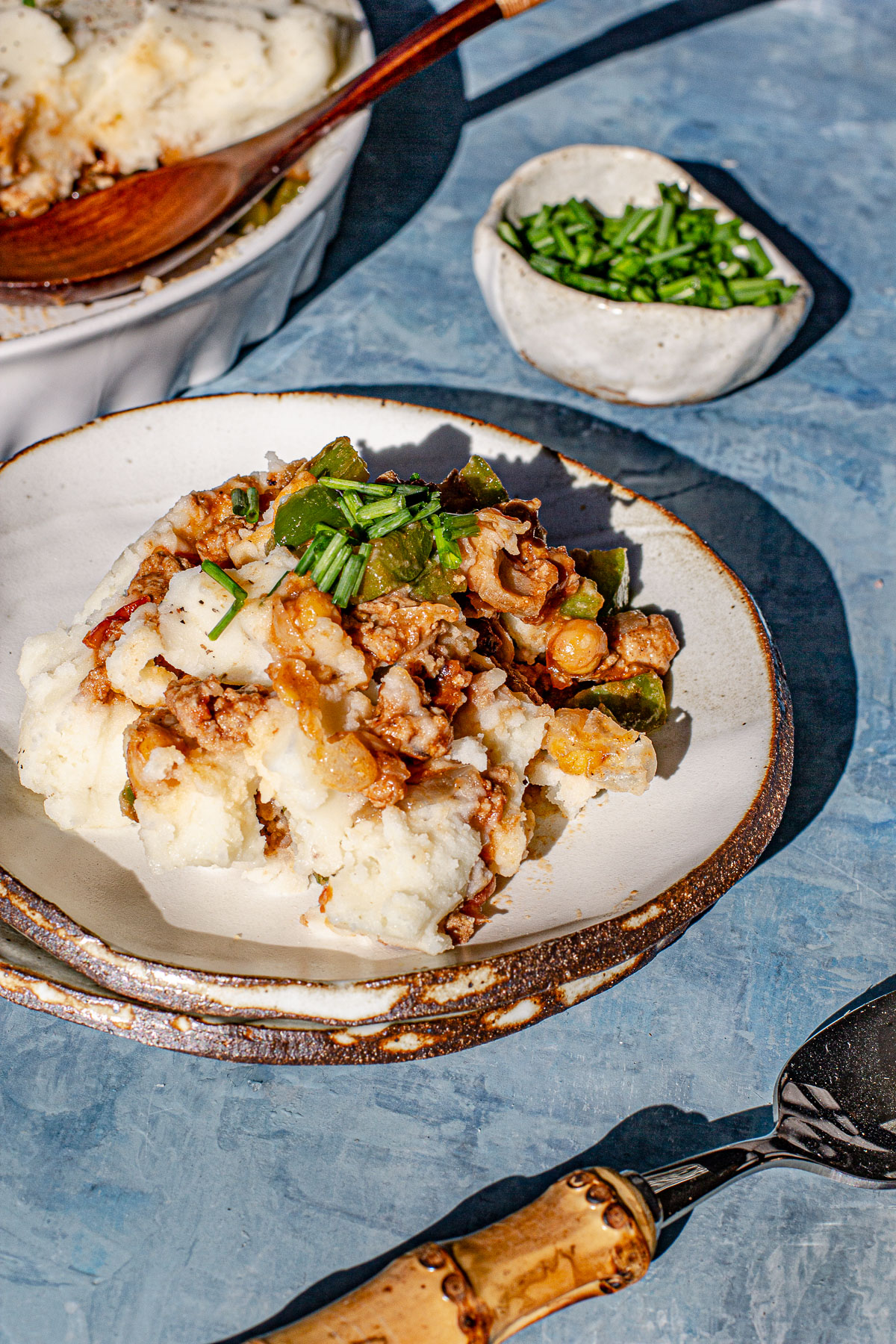 Other Healthy Filipino Meals to Add to the Weekly Rotation

Paleo Longsilog Made With Longganisa Crumbles 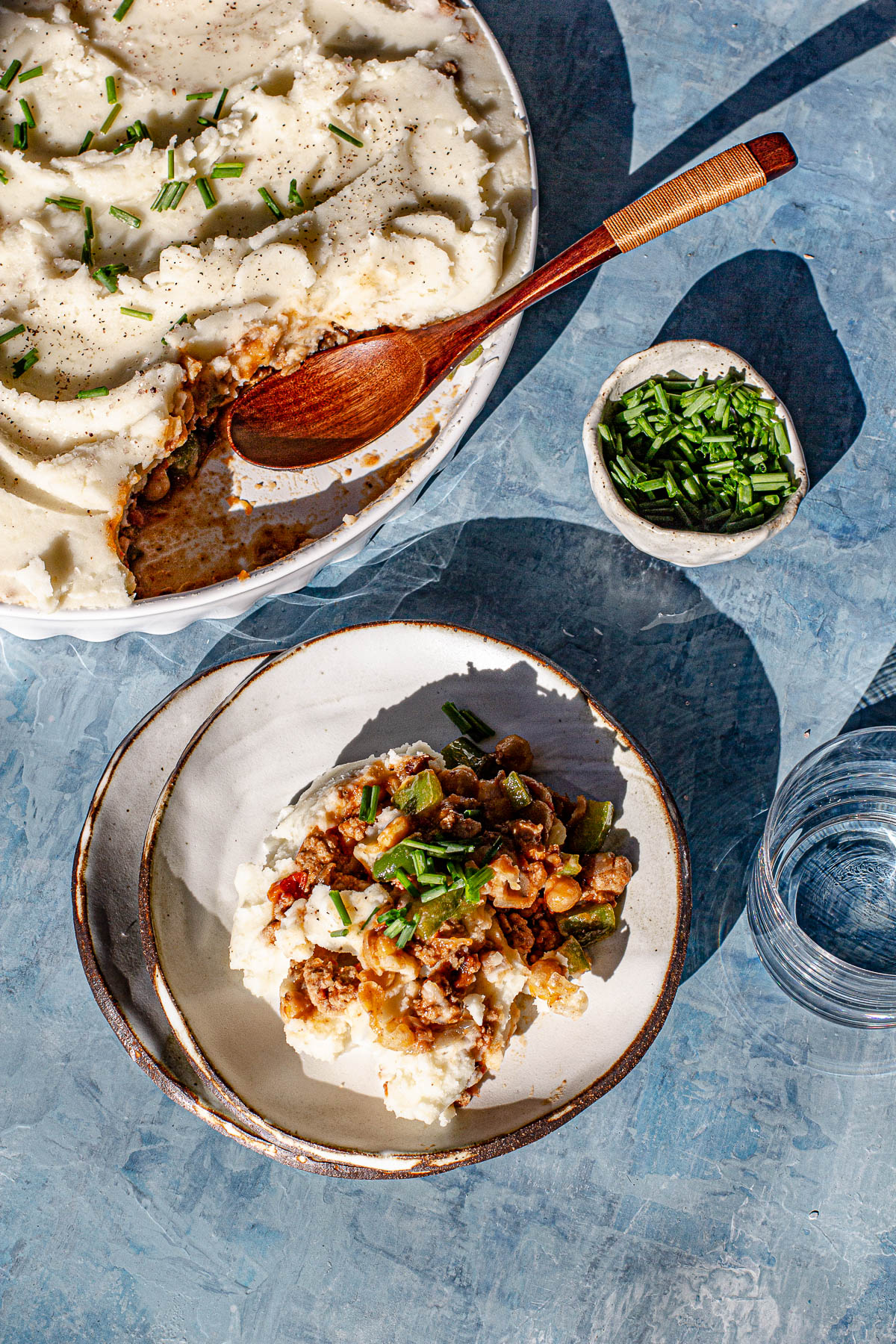