These Paleo Filipino Menudo mini meat pies is a recipe you need to add to your meal prep routine.  Made with a cassava crust and filled with a juicy Chicken Stew, it will fill you up but not bring you down. 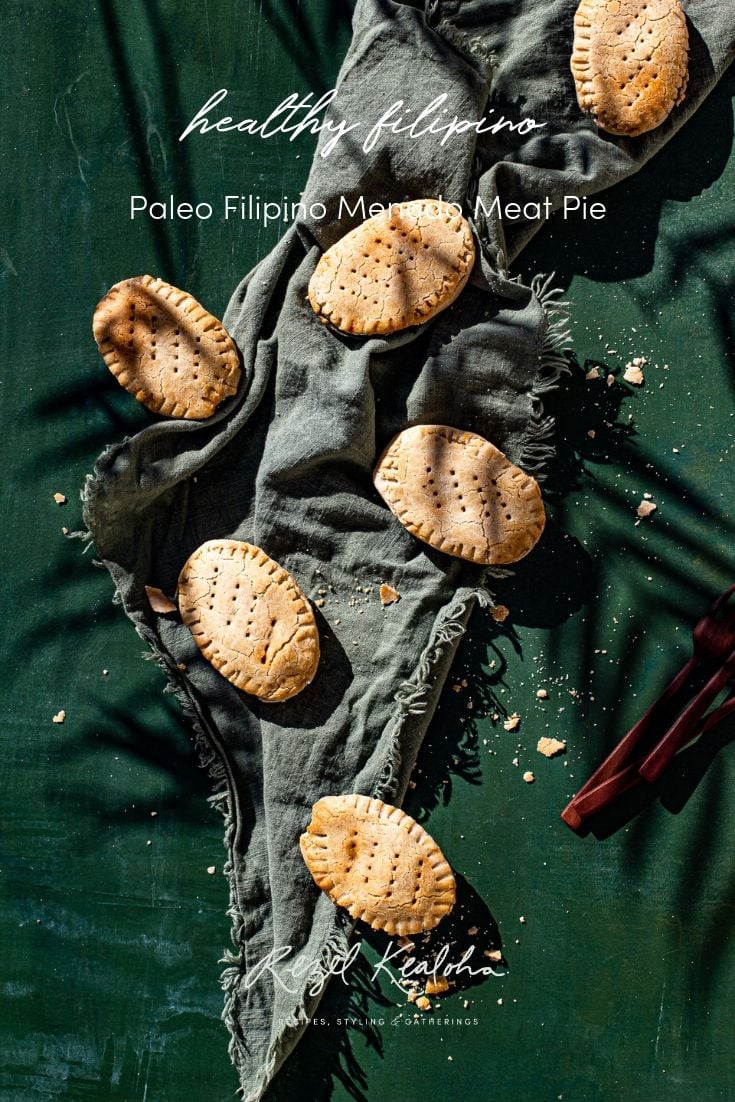 Menudo is a Stew not the 80’s Boy Band

No matter what when I hear *Menudo” I think of Ricky Martin and the boy band before New Kids on the Block. Was Menudo popular here in America too?? Anyone else in their 40’s who can attest? They were super extra popular in the Philippines in the late 80’s.

Anyway apart from being a name of a Puerto Rican Boy Band it’s also a name of a stew in the Philippines. In our family version we make it with chicken, diced bell peppers and potatoes cooked in a soy sauce, tomato and lemon sauce. There is also a Mexican version of Menudo, which is quite different from this.

I the stew in to a mini meat pie, to pay homage to my Aussie fam and the fact that I lived there for 11 years!! A meat pie is as Aussie as you can get.  You can read up on the most famous food trucks in Sydney to find out what the fuss is all about.

To make it paleo used cassava flour that made the crust oh so tender. 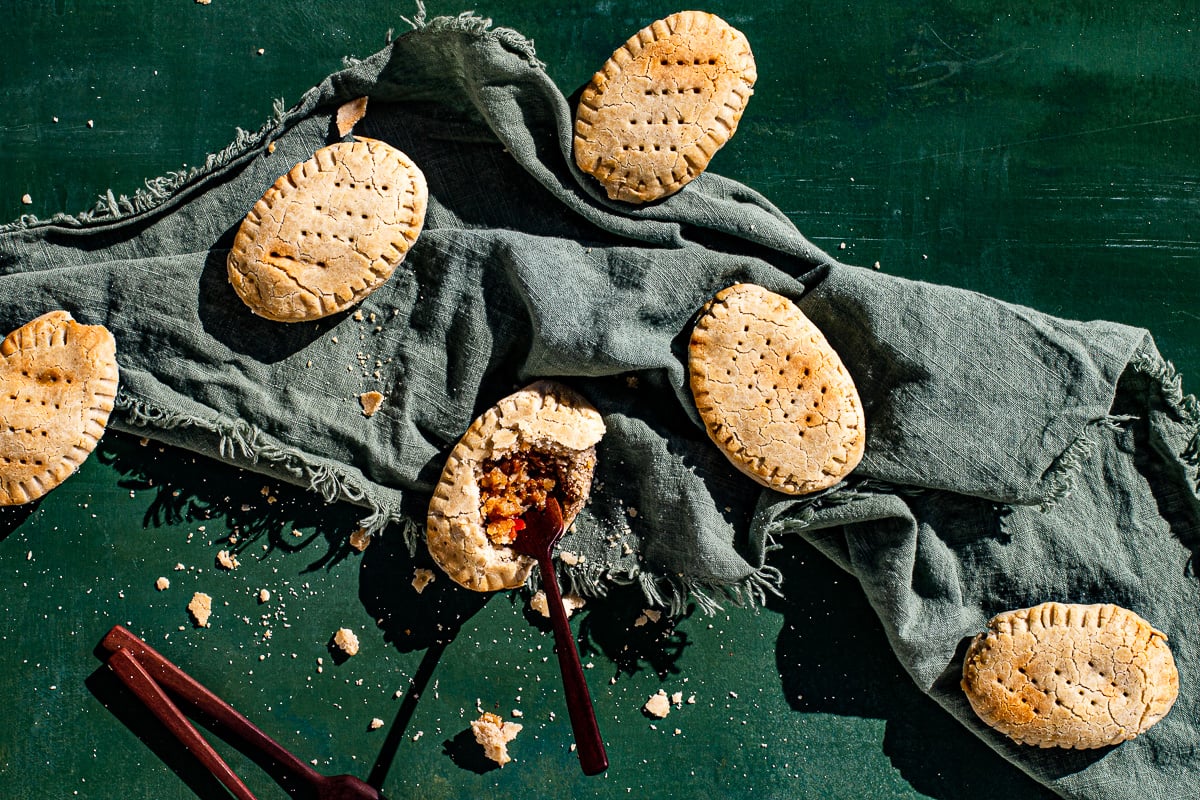 These are perfect to put in a lunch box with a side of salad. Just heat it up in whatever you have access too in the office.

It’s actually pretty easy to make Paleo Filipino Menudo and requires a very minimal ingredient list.  All you need is the following:

Really that is it! 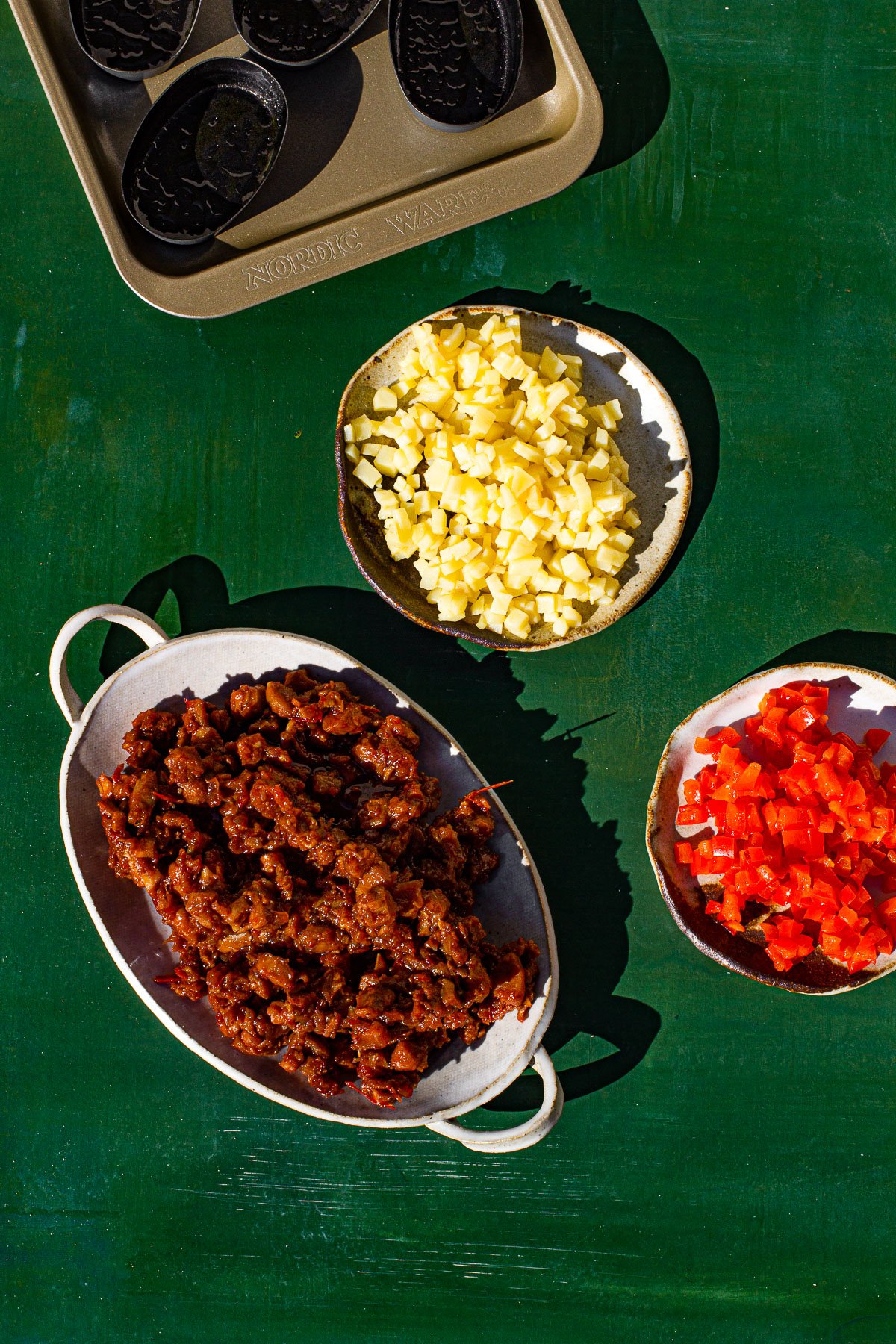 First you cook the chicken with the tomato, lemon juice and coconut aminos.  My mom likes to fry up the potatoes and bell peppers separately so that they have a slightly crispy texture and doesn’t get all mushy when you simmer down the stew. 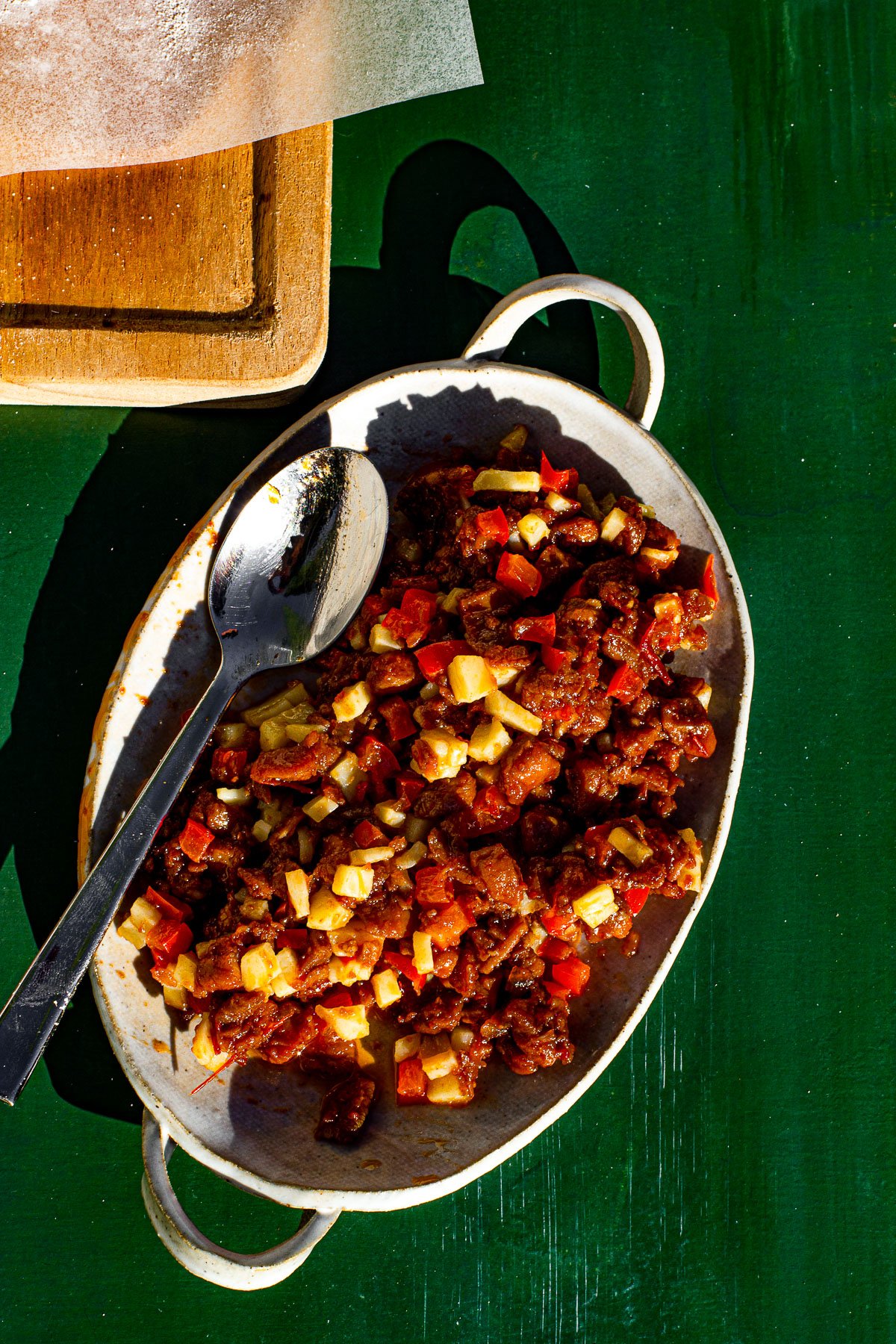 It then gets all mixed together to create this lovely meal.

One of my great finds this year was cassava flour.  This pie crust recipe is almost identical to my vegan pie crust (which you can use for this recipe as well if you don’t need a paleo version).  You throw all the ingredients into the food processor and have a nice flaky dough. 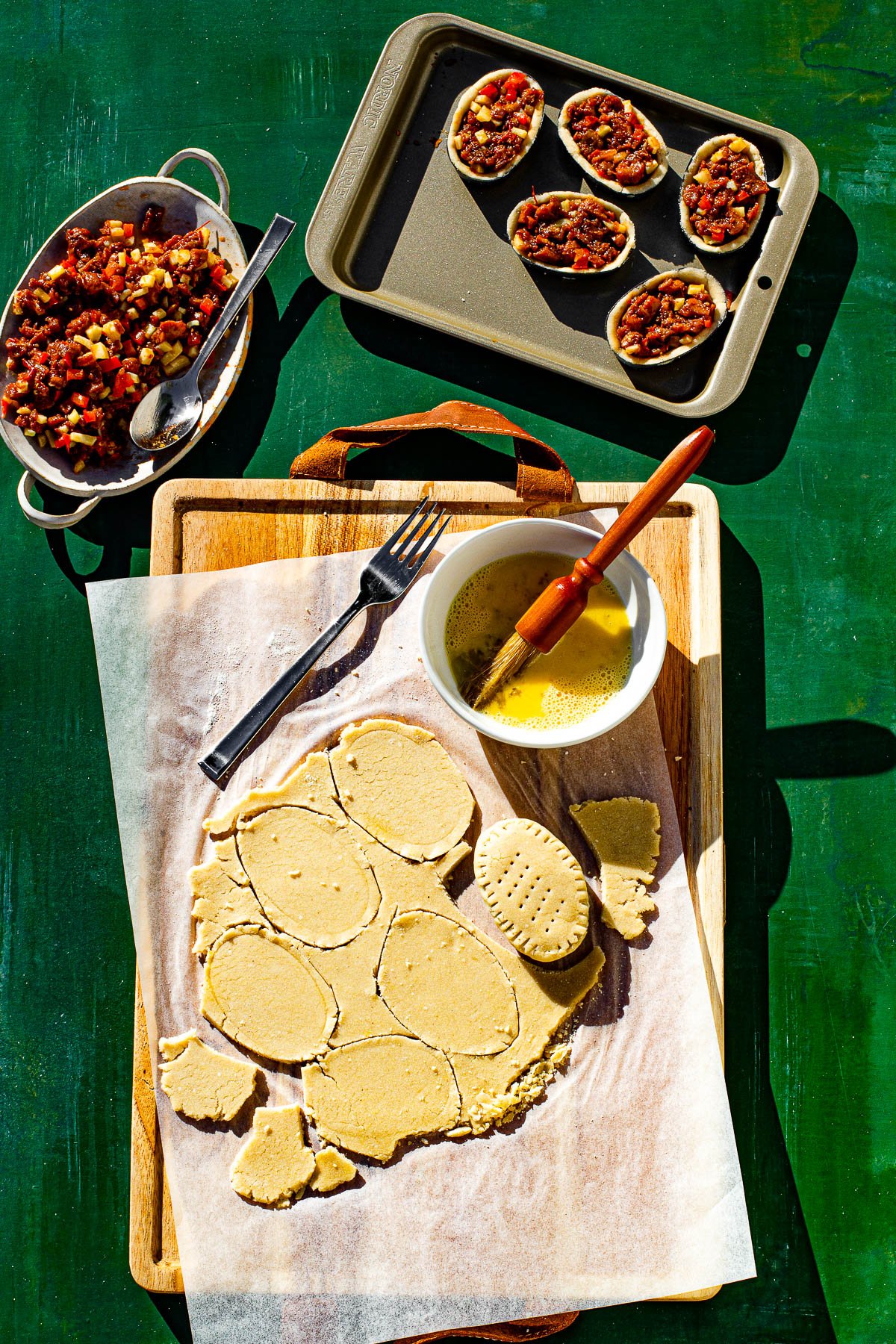 This dough does get a little flakey as you press it into the pie tin.  But it does come together when you pinch it together. 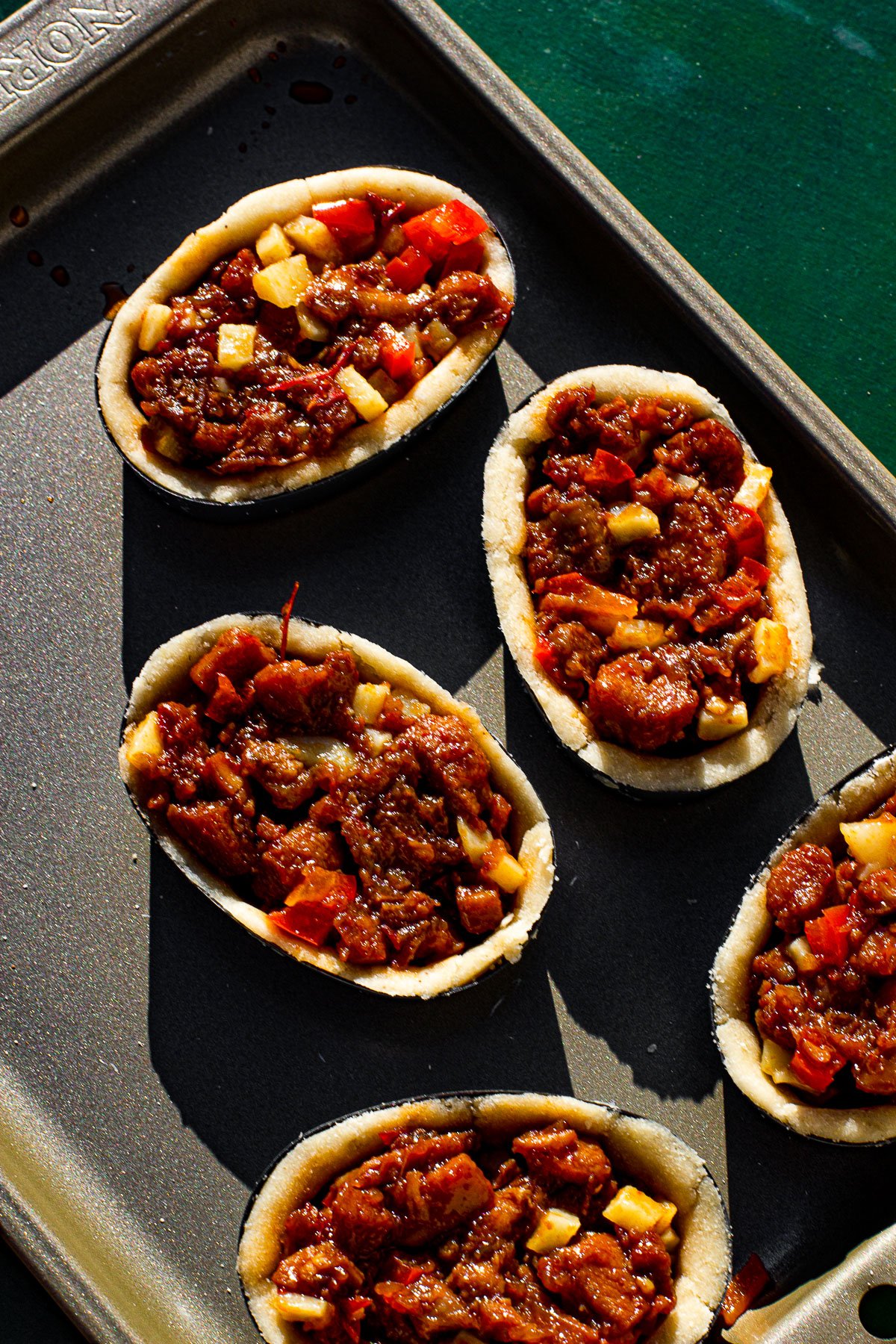 Once you have each pie tin lined fill with the Paleo Filipino Menudo.  Then cover with a layer of dough crimping the edges with a fork to seal the filling in. 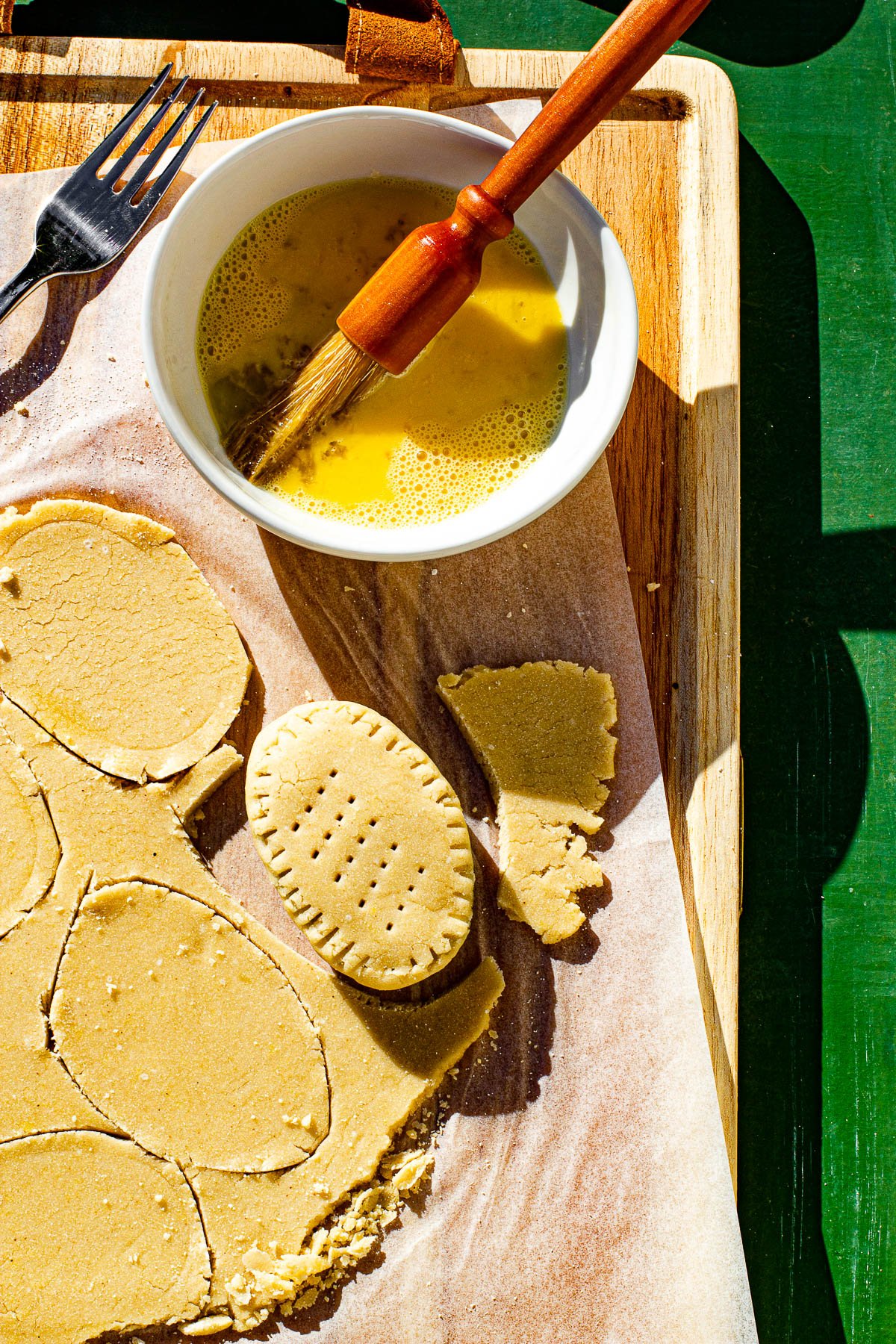 Using the same fork poke some steam holes so that the crust does not bust open during baking.

Once you have the pies all formed you can either bake them right away, leave in the refrigerator overnight or even freeze over a couple of days.

Just before baking spread some egg wash on the crust. 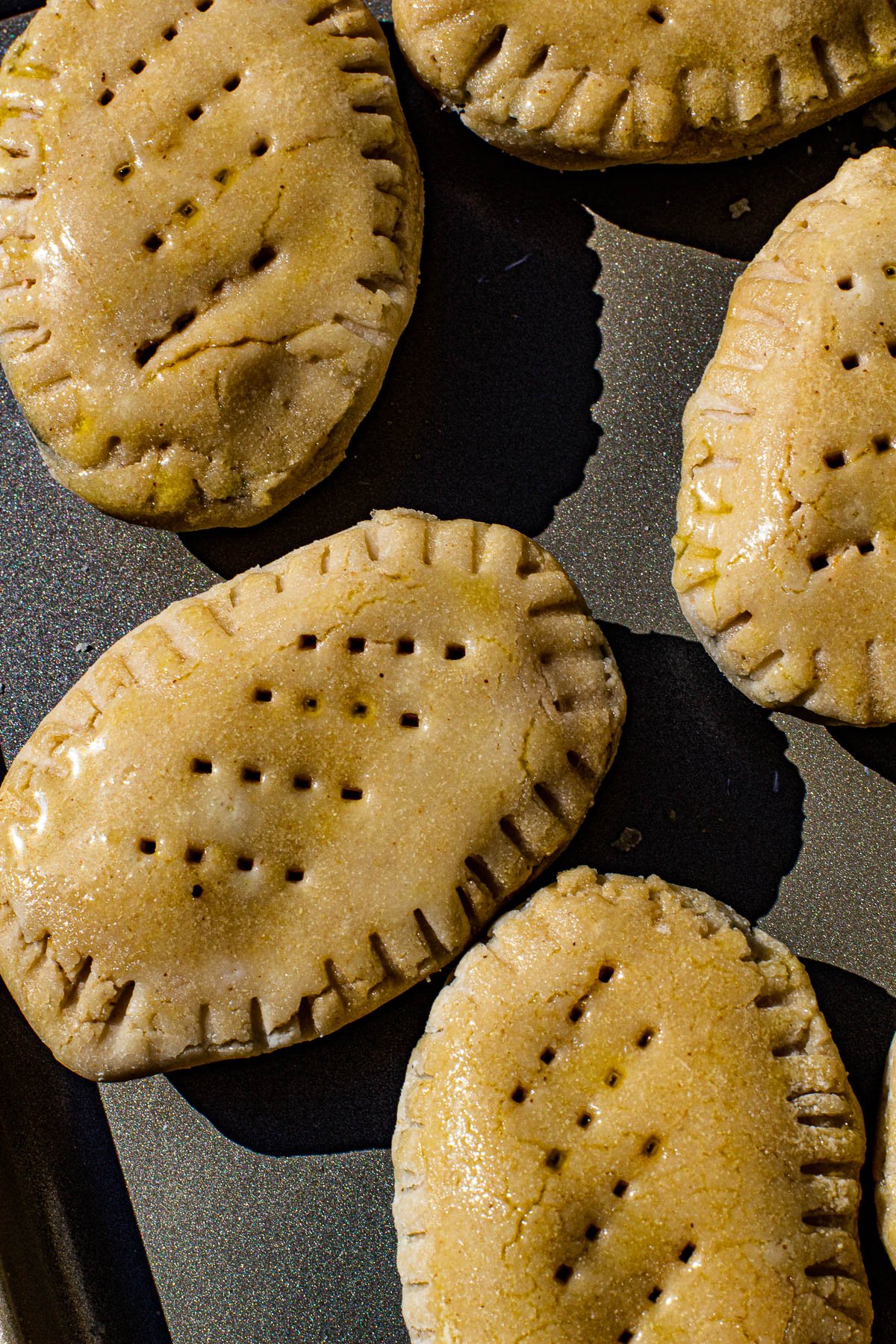 Bake at 350 degrees for 25-30 minutes until the crust is golden and the Menudo starts to bubble out of the holes.  Leave to cool for a little bit serve with some hot sauce on the top. 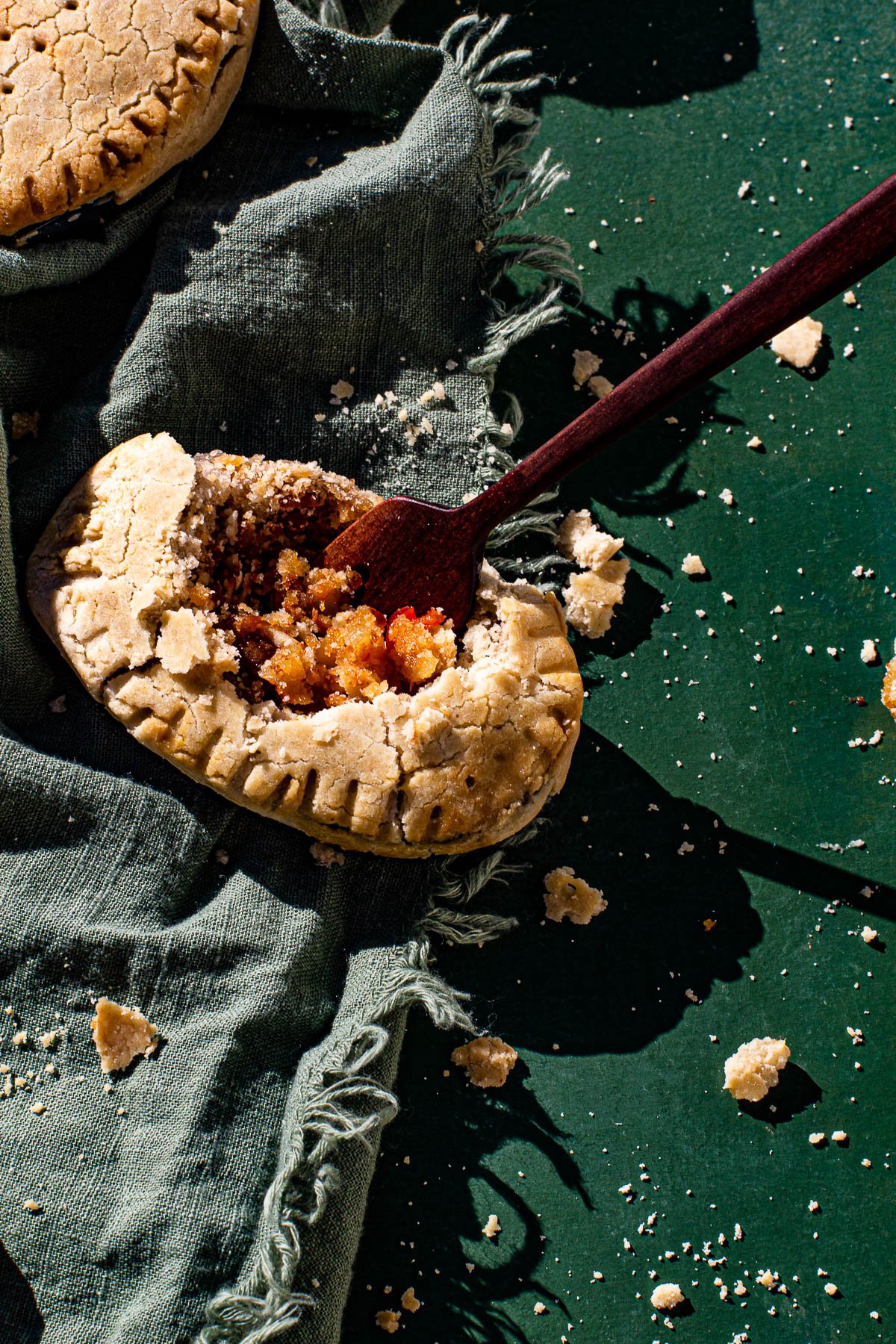 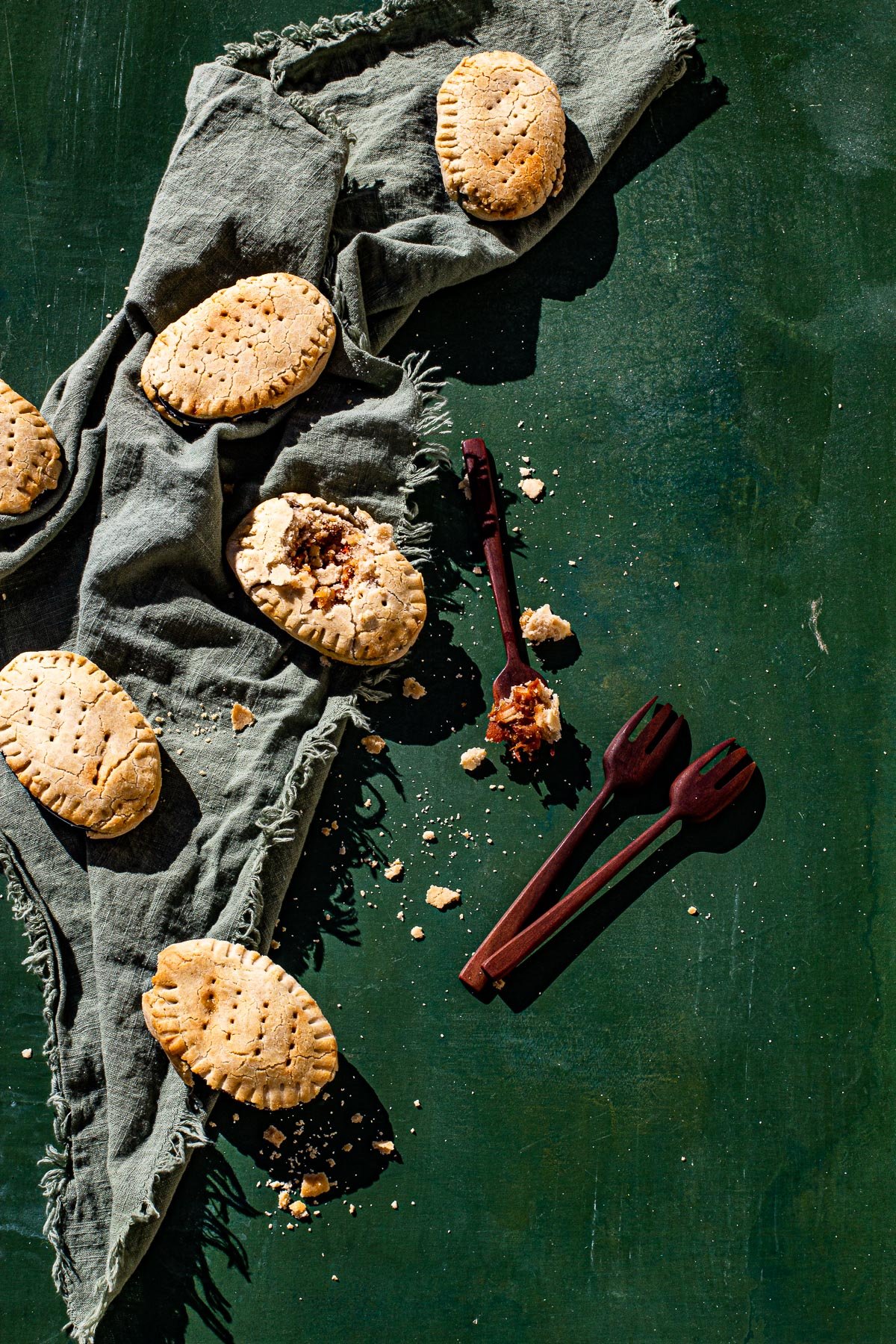 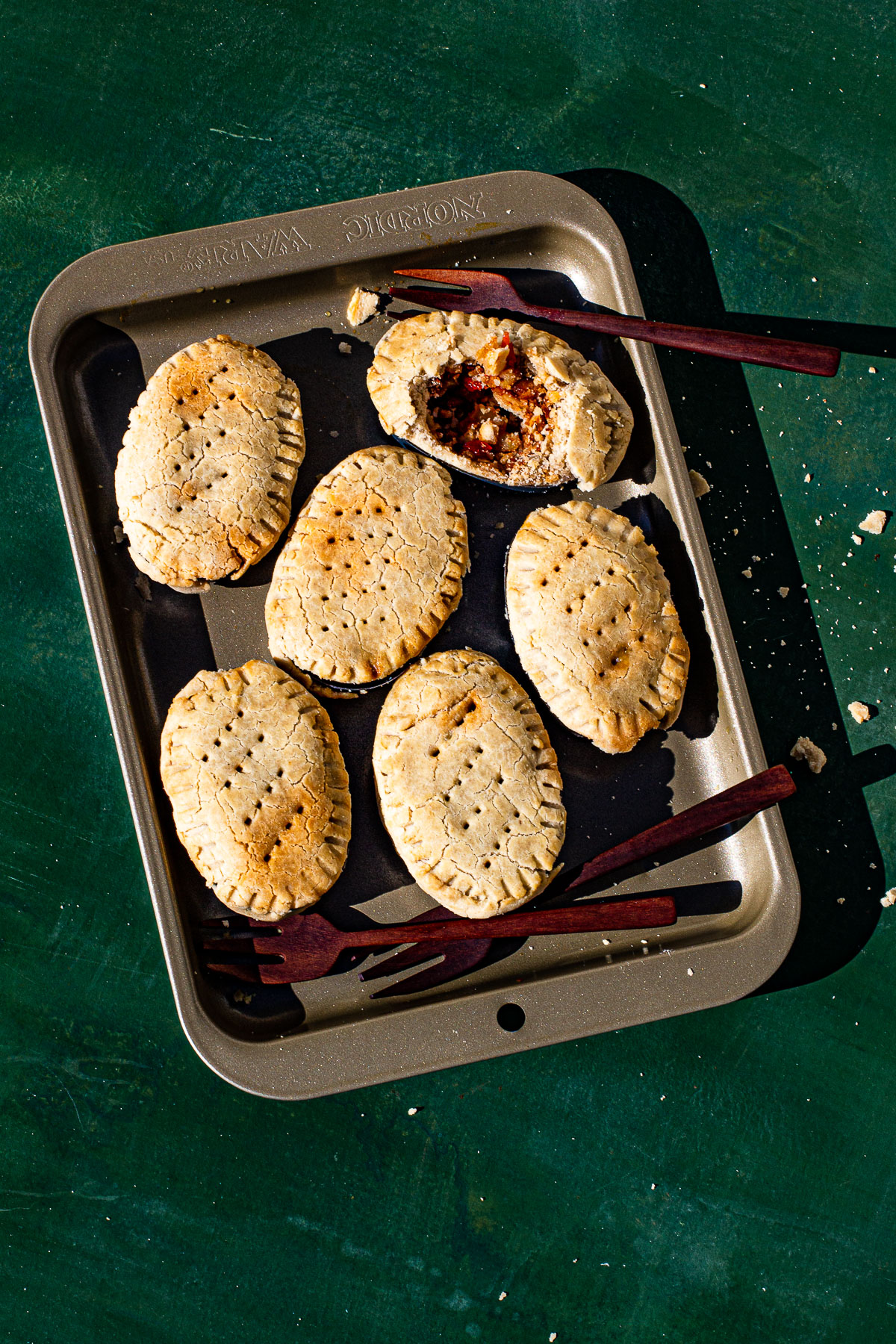 These Paleo Filipino Menudo mini meat pies is a recipe you need to add to your meal prep routine. Made with a cassava crust and filled with a juicy Chicken Stew, it will fill you up but not bring you down.
Print Recipe Pin Recipe Rate Recipe
Prep Time: 20 minutes
Cook Time: 40 minutes
Total Time: 1 hour
Course: Main Course
Cuisine: Australian, Filipino, Gluten Free, Paleo
Servings: 8 Mini Pies
Author: Rezel Kealoha
Did you enjoy making it? I would love to see it! Tag me on Instagram @rezelkealoha with the #rezelkealoha!