Don’t let this Milo Tiramisu intimidate you!  It’s super easy and in this kid friendly version, we use no eggs or alcohol.  Just some Milo and whipped cream gets you a very glam dessert on the table in no time. 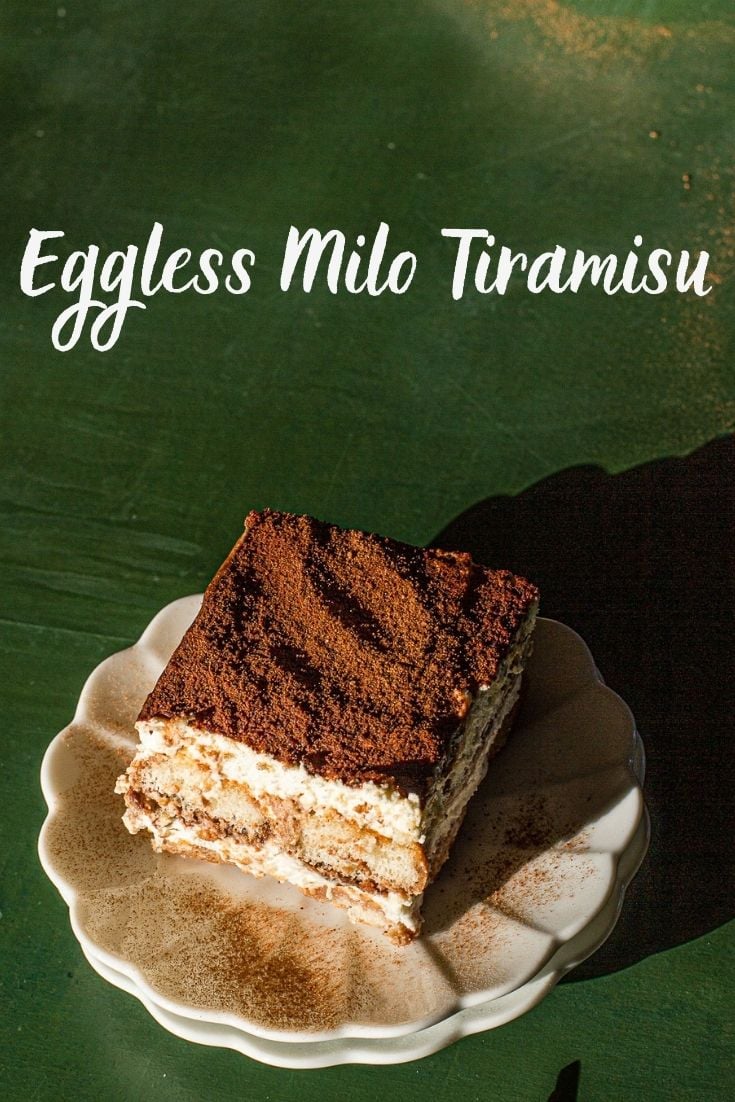 Okay, we are going to start with what is Milo first.  If you grew up in the Philippines, Singapore, Malaysia, and Indonesia it was the energy drink of your youth.  Invented in Australia in the 1930’s it’s produced from malted milk or barley and flavored with chocolate.  Is it healthy though?  I am not sure.  But it is marketed as a “healthy” drink to have before sports.

There is this one drink in Singapore called Milo Dinosaur and I wanted to make a dessert where I could make the same effect.  A Milo Dinosaur is a drink of Milo, with an addition of extra Milo spooned on top of the drink.  I went through lots of thoughts and settled on Tiramisu an Italian dessert traditionally made with whipped eggs, marscapone and coffee.

In this version of Milo Tiramisu, I am replacing the whipped eggs with whipped cream and the coffee with Milo.  I adapted this recipe from Little Spice Jar.

What Ingredients Do You Need to Make For Milo Tiramisu? 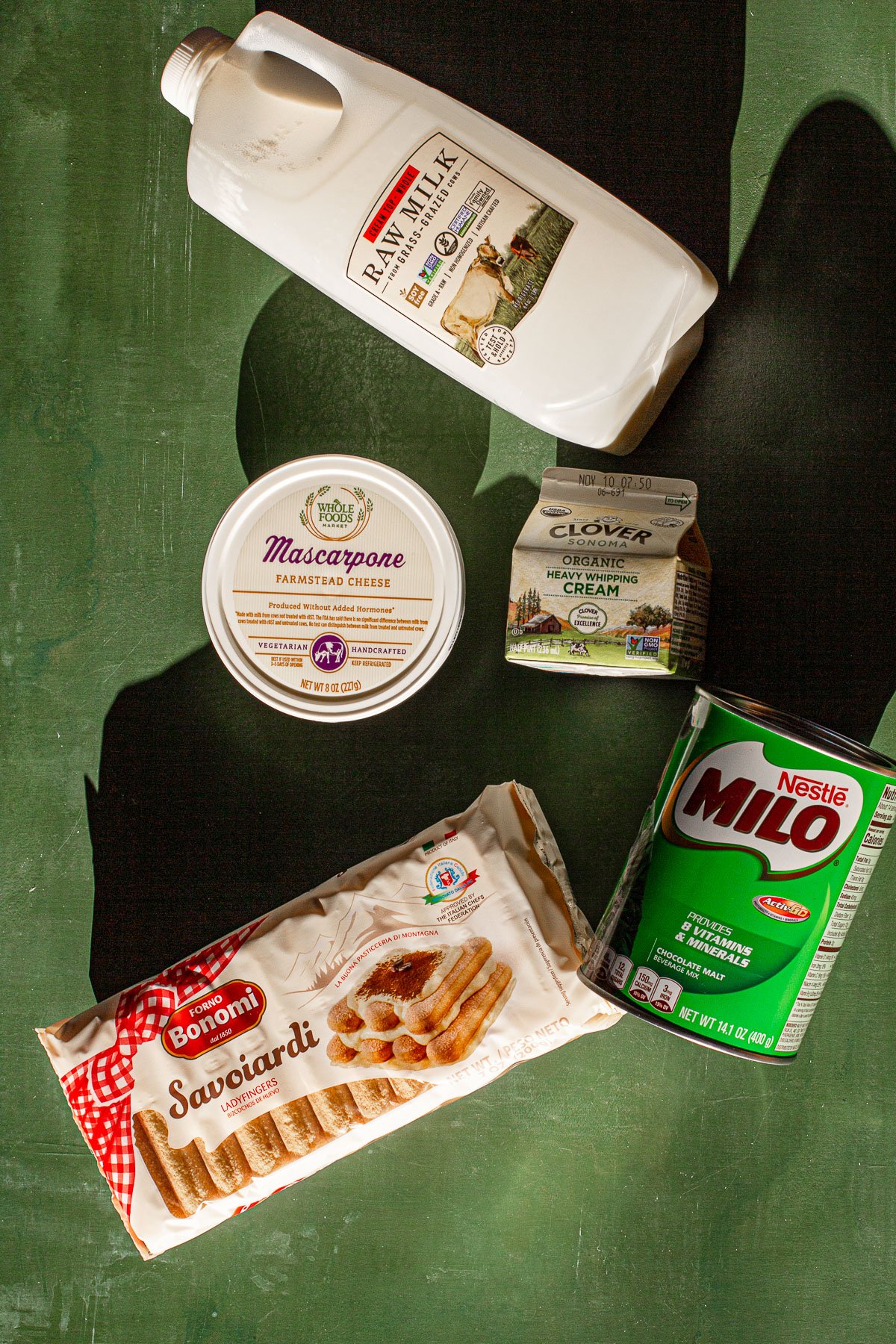 Milo – The king of our ingredients.  We are going to use this to both soak the lady fingers and use as our chocolate topping, because Milo Tiramisu!

Milk – We will used this to make our Milo drink to replace the coffee.

Lady Fingers – A super dainty and delicate cookie traditionally used in Tiramisu.  We are going to quickly dip that in the Milo mixture to use as the base of this dessert.  You are going to need 24 lady fingers for this recipe.  Essentially the whole packet.

Super Cold Whipped Cream – As I said earlier this Tiramisu is eggless and we are going to get that additional lift from whipped cream.

Super Cold Marscapone – Still part of the traditional Tiramisu, we are keeping this for additional creaminess.

Powdered Sugar – We are going to be using powdered sugar to mix with the whipped cream for just a touch of sweetness.  This sugar also absorbs easier into the cream so it’s not grainy.

Vanilla Extract – For a little bit of additional flavor.

To start place the super cold whipped cream in a bowl and whisk until nice and fluffy.  The key is to not under or over whip.  If you under whip, the tiramisu will be a little runny and if you over whip you will get butter.

Stand over the whip cream if you are using a stand mixer.  It should take less than 5 minutes to have it nice and airy, doubled in size.

Stop the mixer and add in the powdered sugar and vanilla and mix until incorporated, just a few seconds.  Then stop the mixer again and add in the mascarpone.  Here we will lightly whip it in, trying to add more air so that it has volume.  Again about 5 minutes and don’t over whip!  It should look like a nice fluffy could and if you lifted it up some with your whisk it should stay and hold up.

Set the whip cream aside and make the Milo by mixing together 1 cup of milk and 4 tablespoons of Milo in a large bowl. Have an 8×8 pan ready along side the Milo drink, lady fingers and whipped cream. 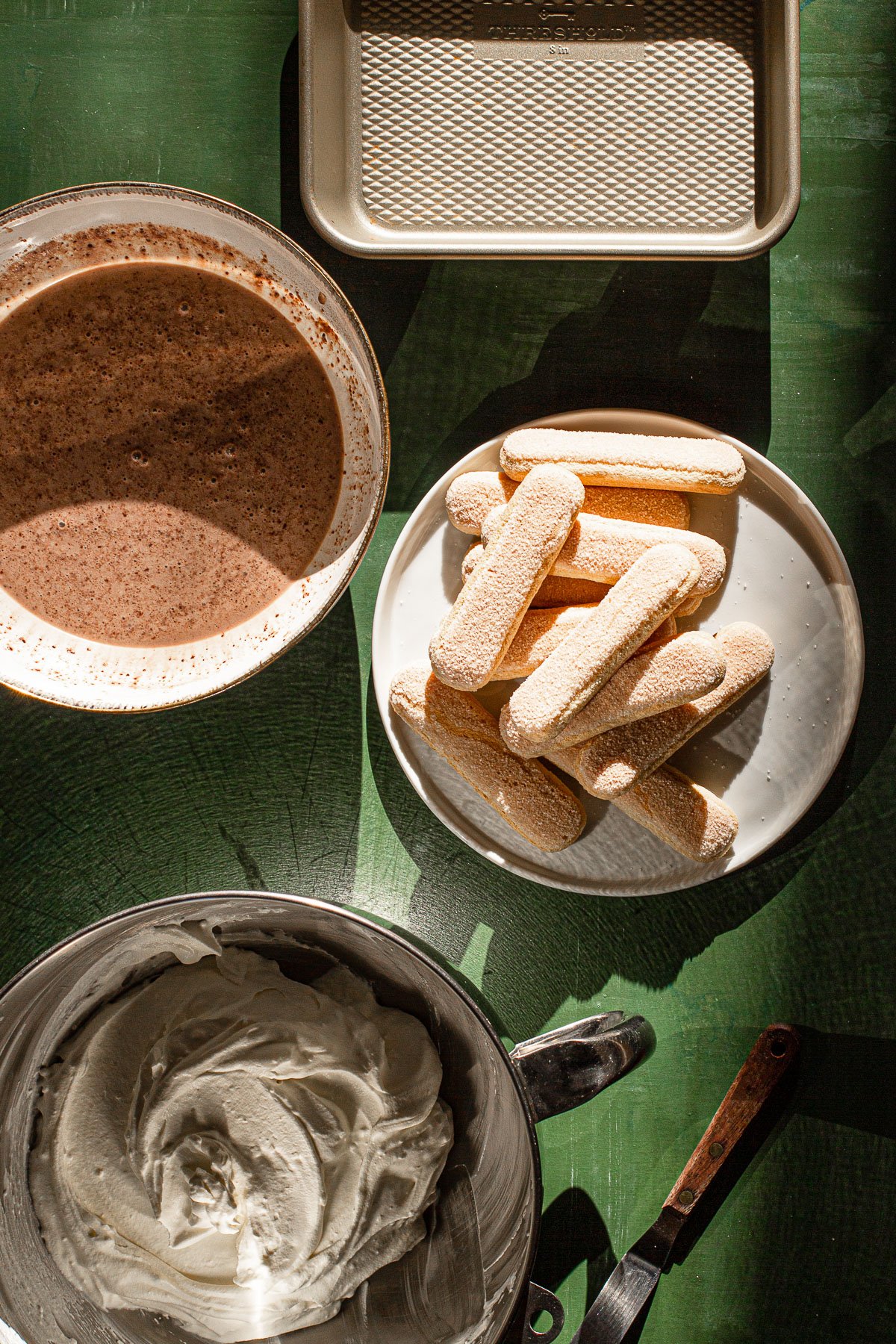 Now we are ready to start layering the Tiramisu.  Start with dipping one lady finger in the Milo drink, soaking both sides quickly. 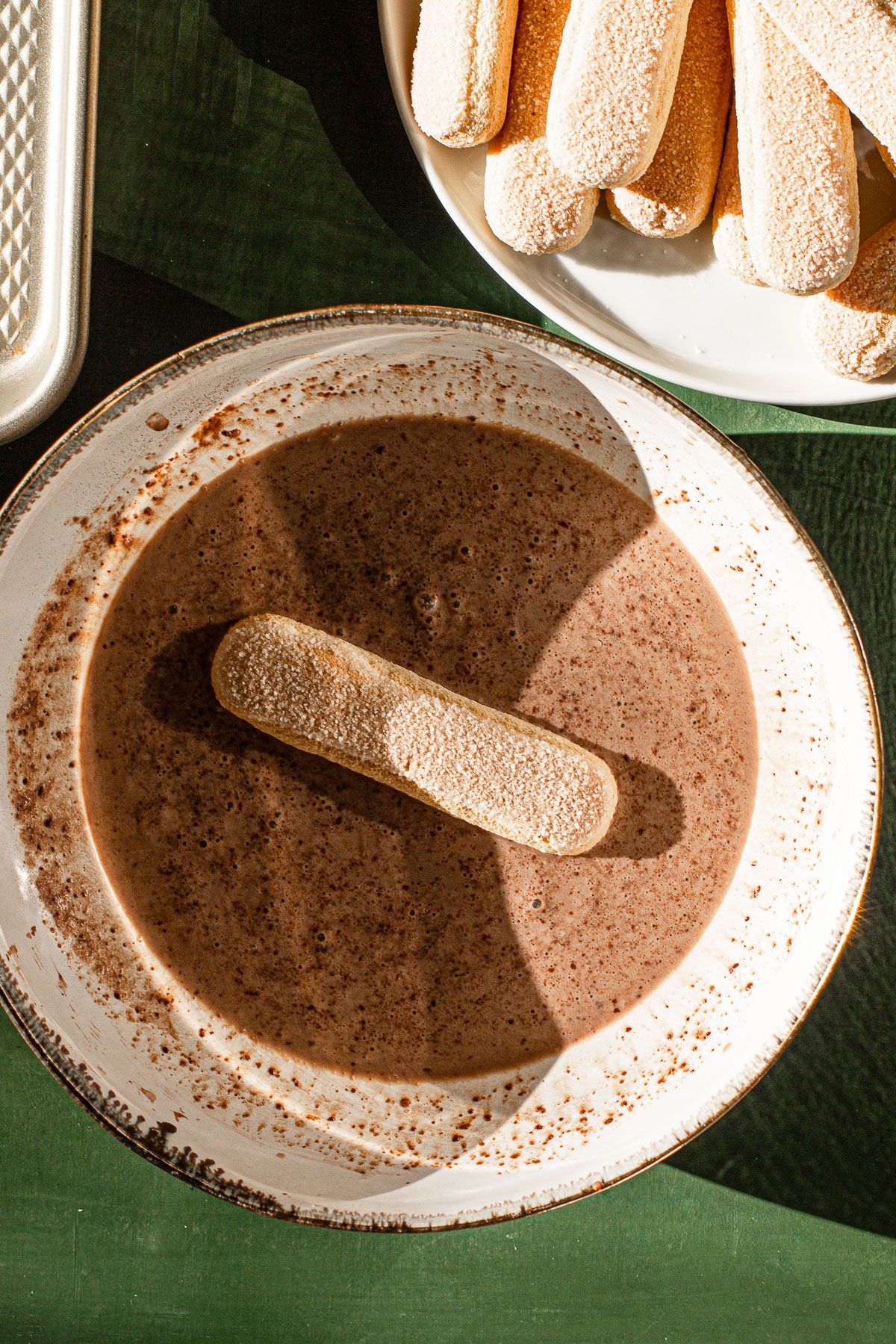 Then start layering each soaked cookie in the pan in a nice even layer all across. 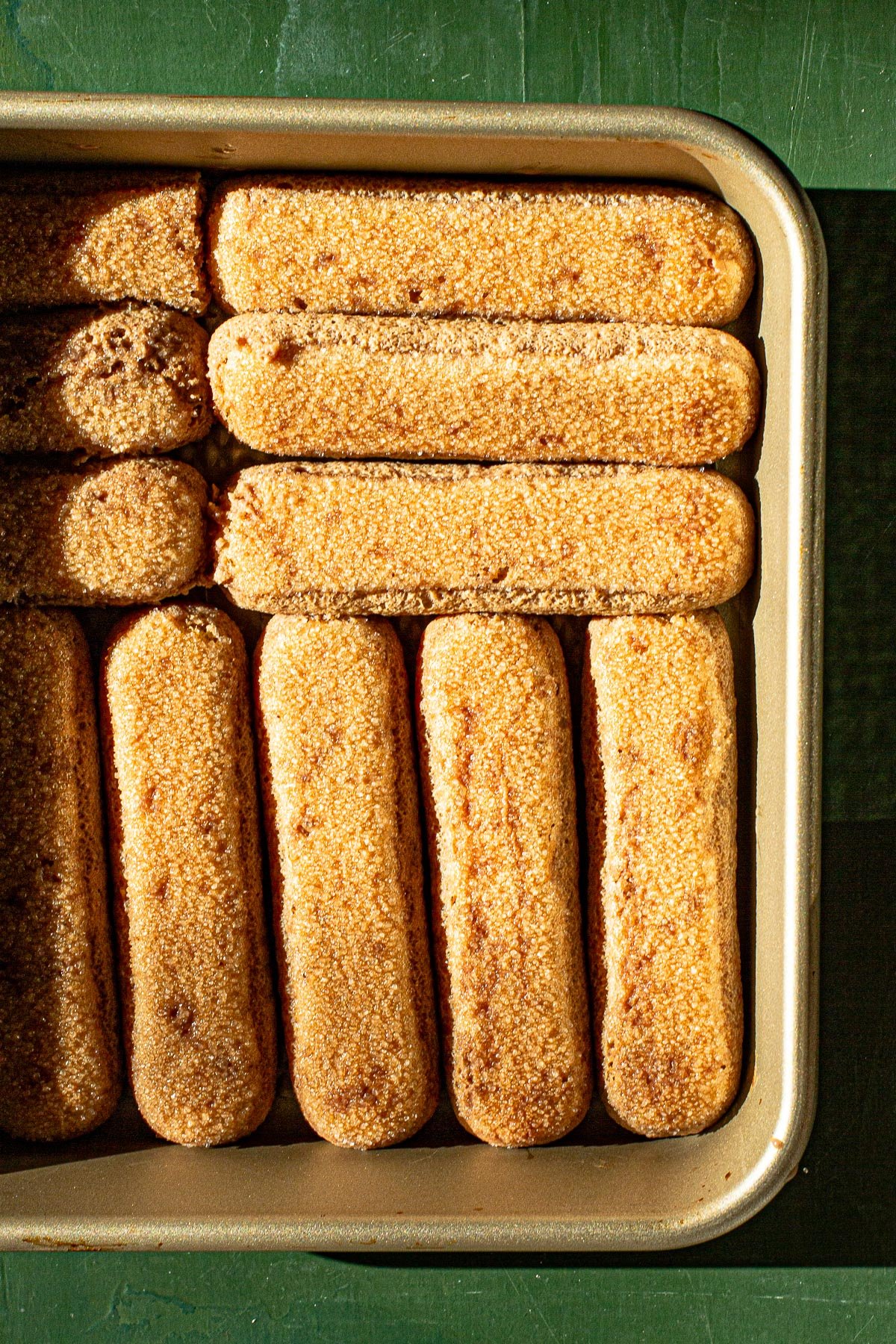 Once the bottom has been lined with Milo soaked cookies spread half the cream on top.

Then top the cream with 1 cup of Milo.  Spread it evenly over the cream.

Now top this with an additional layer of Milo soaked ladyfingers. 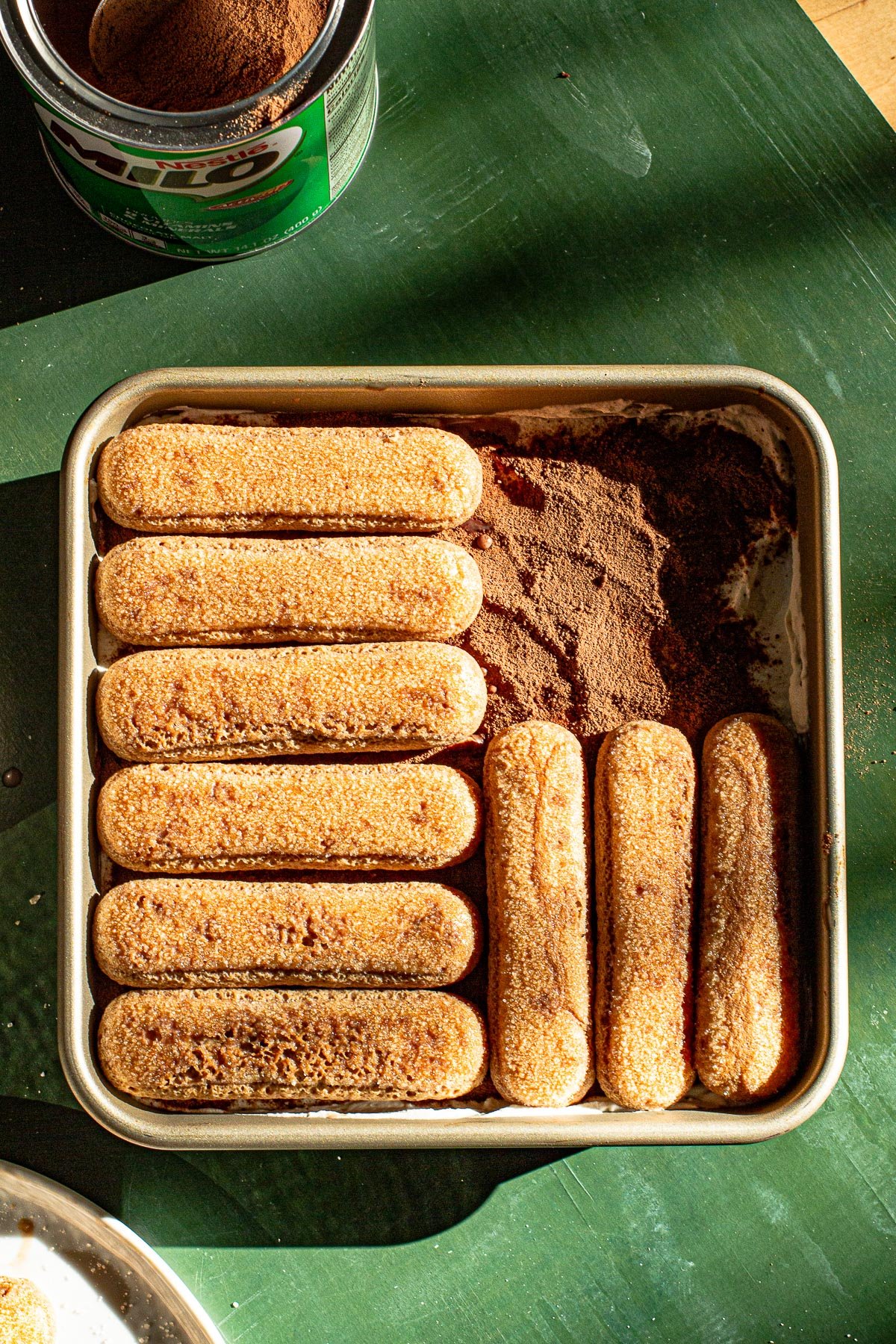 Then you can either pipe or spread the remaining half of the cream.  I actually ran out of cream to pipe so one half ended up piped and the other half ended up spread.  It turned out to be a beautiful mistake that I am not made about! 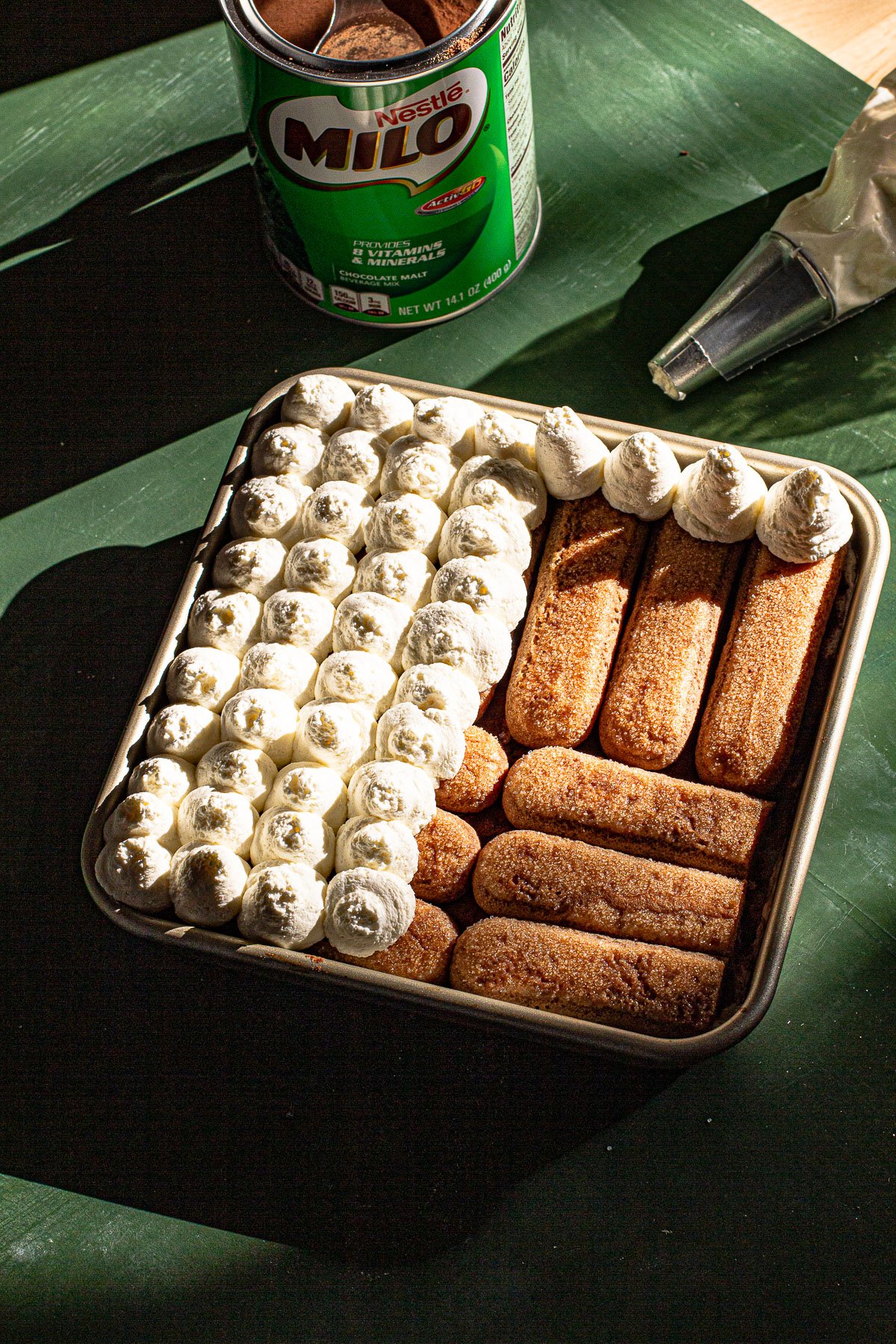 Finally dust with another cup of Milo to finish. 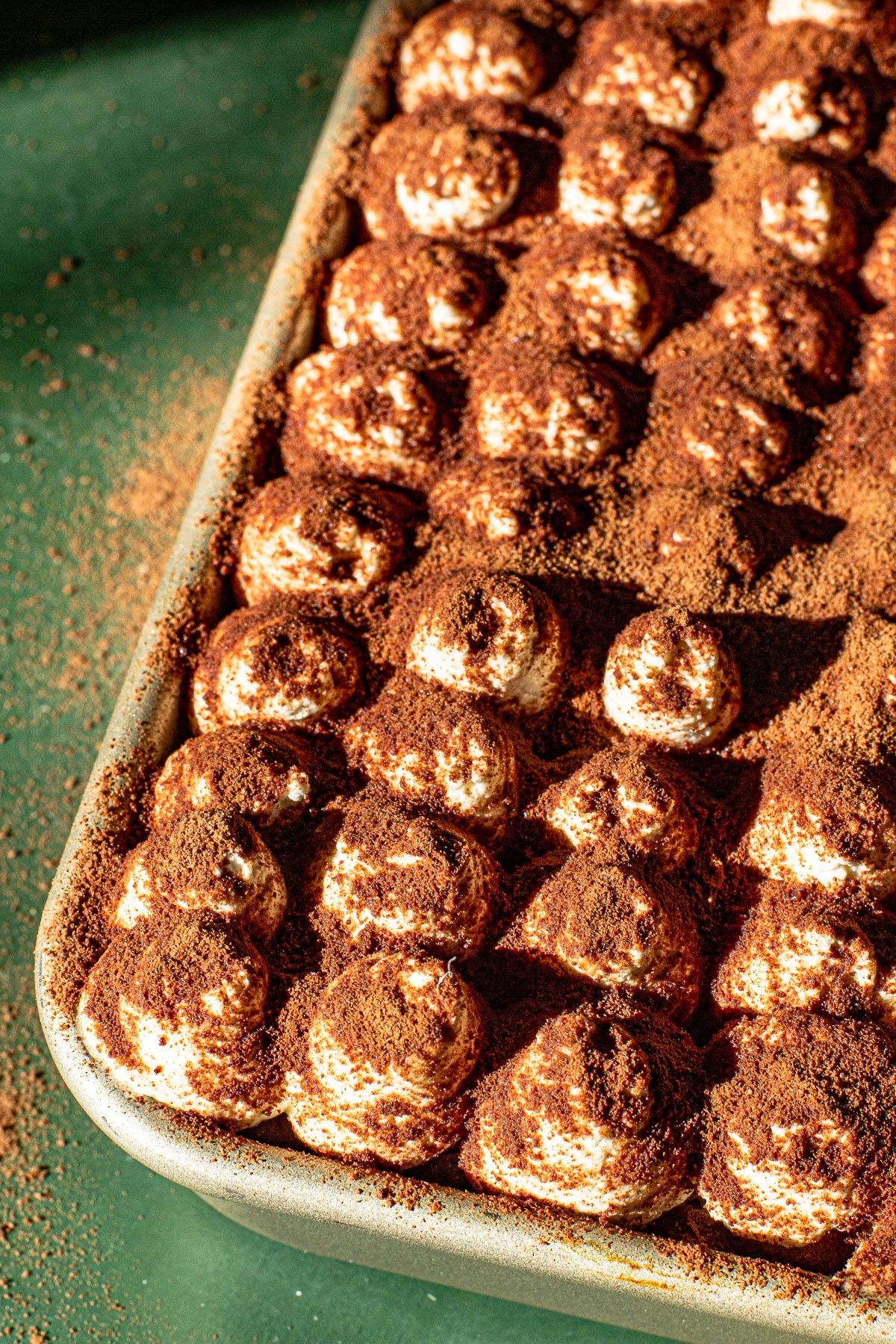 How To Serve The Milo Tiramisu

Now is the hard part.  You must put it in the refrigerator for at least 4 hours to set and even up to overnight.  I prefer overnight as the Milo you dusted in the middle melts into the cream to make a chocolate sauce.

After it has set cut into squares and serve on a plate and dust with more Milo. 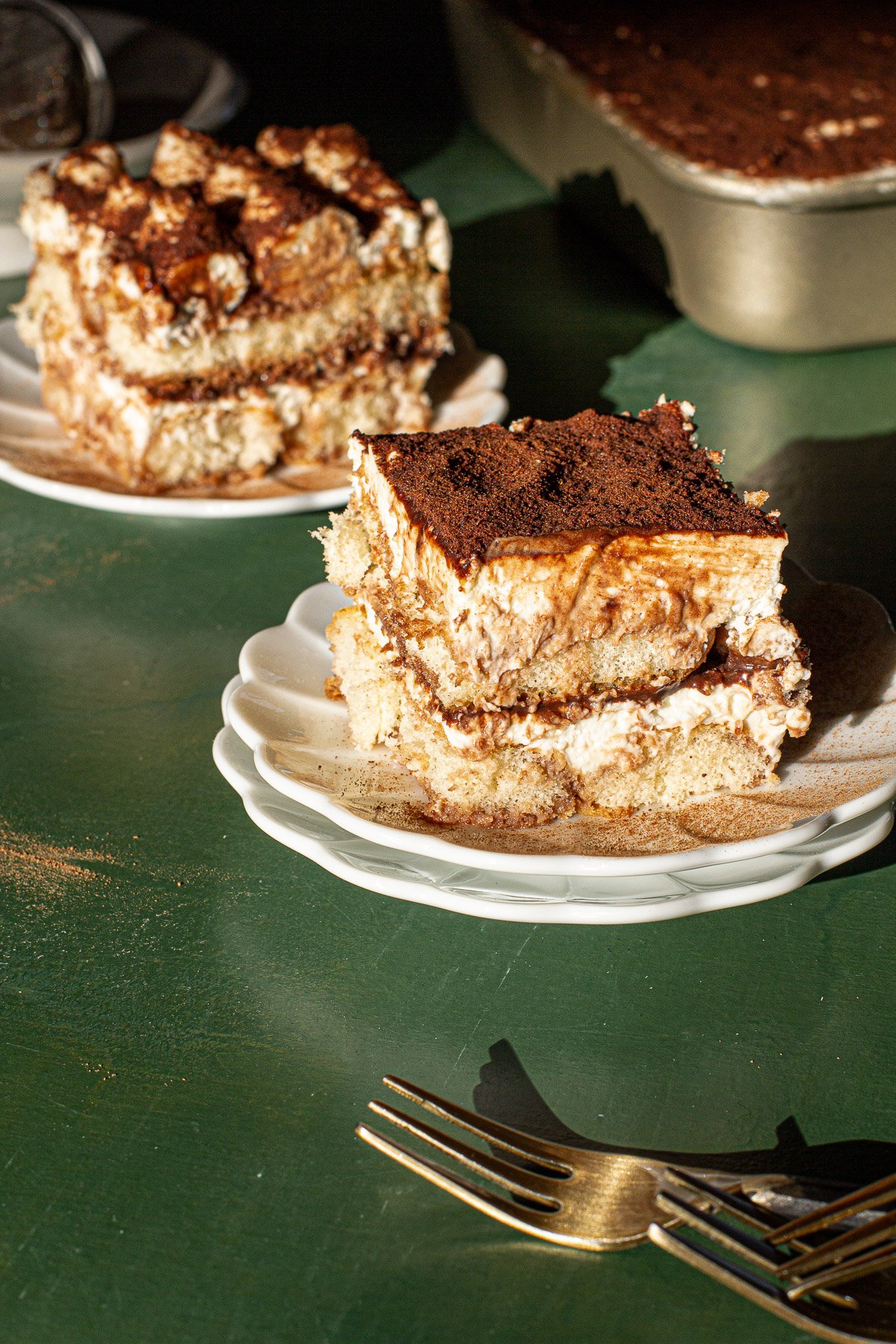 I mean look at those layers!

There you have it – super easy egg less Milo Tiramisu, that is good for both kids and grown-ups alike. 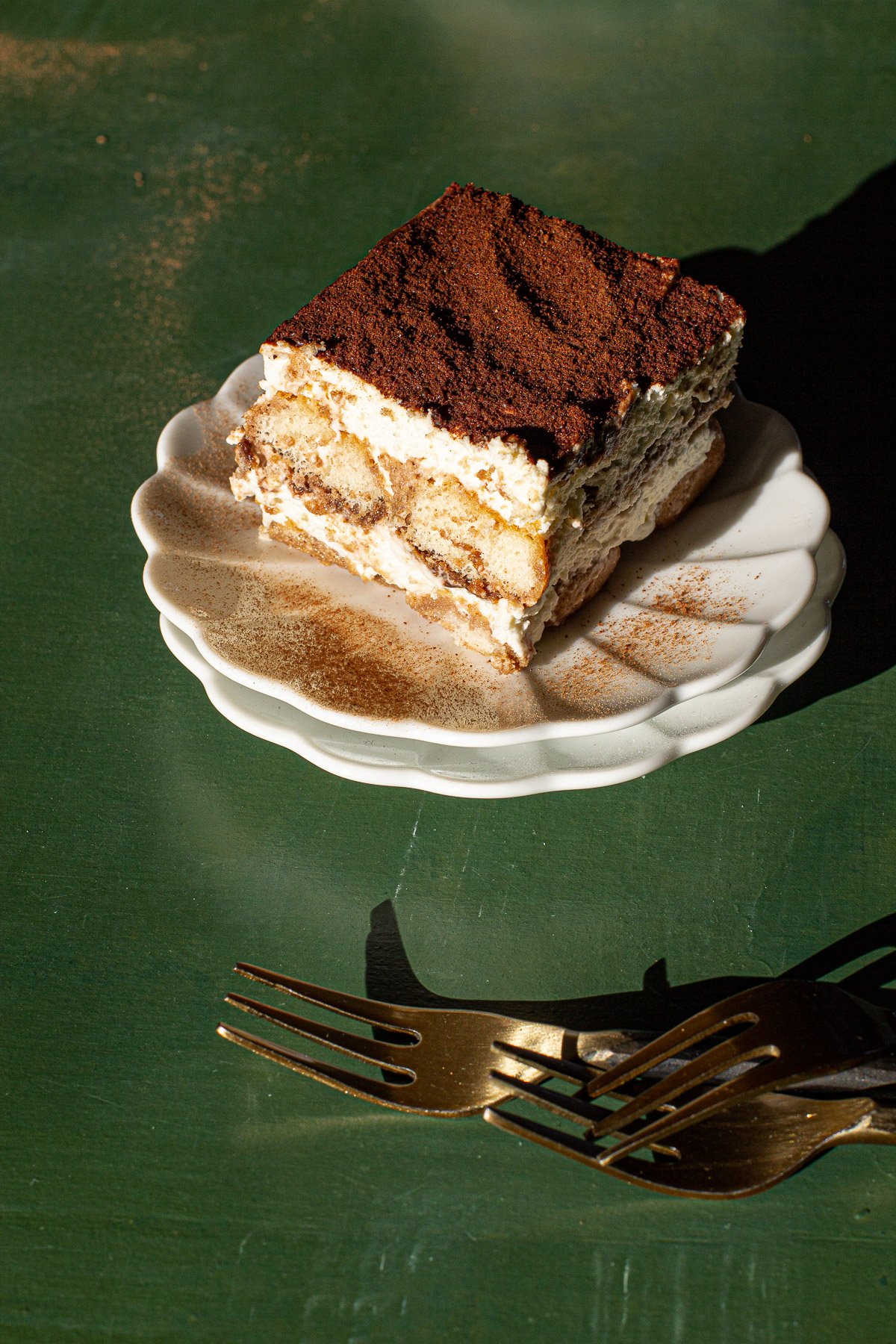 Other Chocolate Recipes To Make 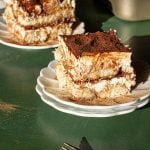 Don’t let Tiramisu intimidate you!  It’s super easy and in this kid friendly version, we use no eggs or alcohol.  Just some Milo and whipped cream gets you a very glam dessert on the table in no time. Recipe Adapted From Little Spice Jar.

Setting and serving the Milo Tiramisu