This Crispy Kale and Potato Hash is what dreams are made of, crispy buttery potatoes drizzled with a tangy creamy dressing. 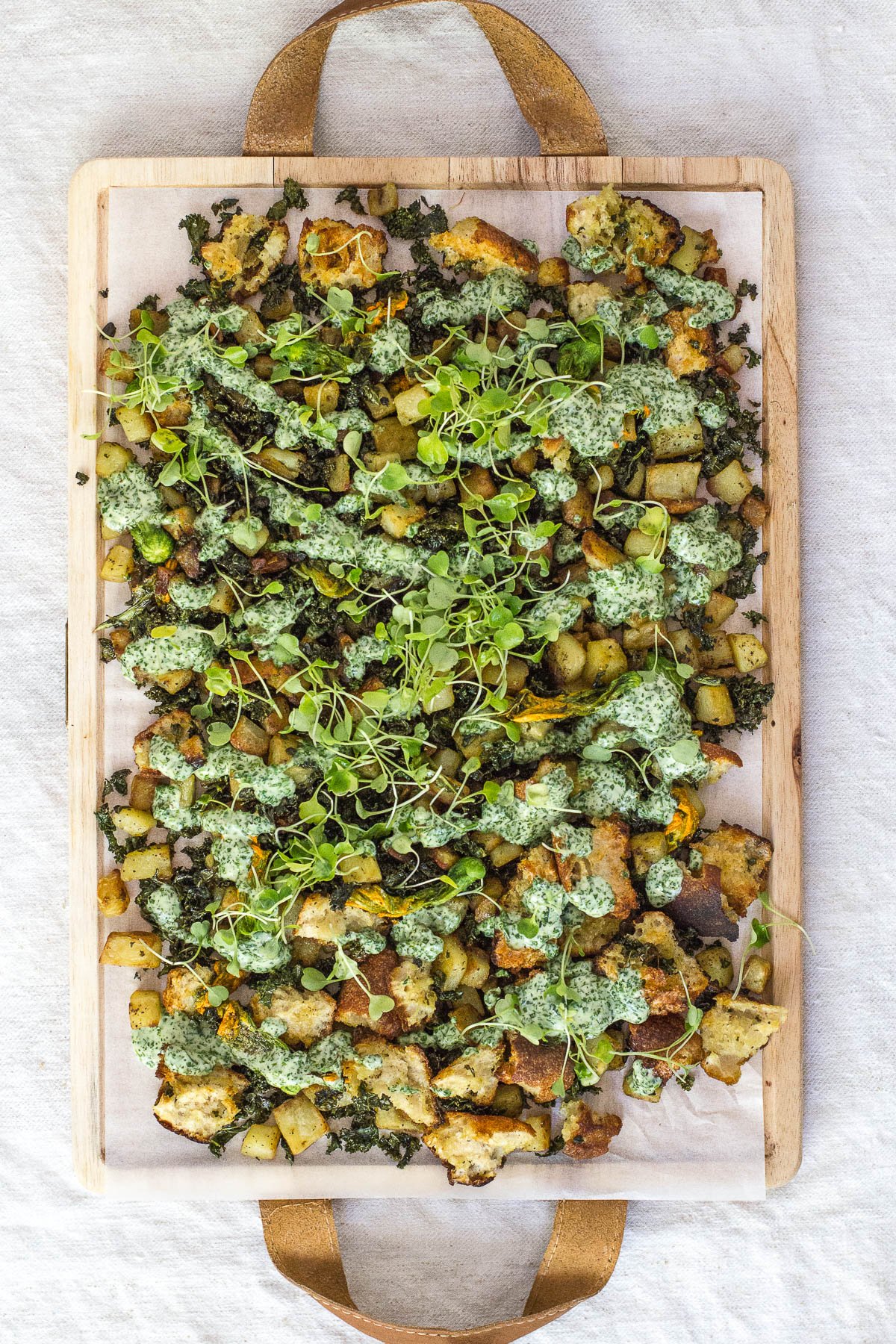 Hash Must Be Crispy

Okay I’ve been obsessing about hash for probably 3 months now because I’ve had really crappy ones.  You know when you look at a menu and they describe hash you automatically think ooh crispy potatoes yup…  gotta have that.  Then you do get it and it’s filled with soggy vegetables or soupy protein.   You also proceed to talk shit about it the whole meal.  I’m sorry but if you serve hash it has to be crispy potatoes and the potatoes need to stay crispy no matter what else is in the hash. 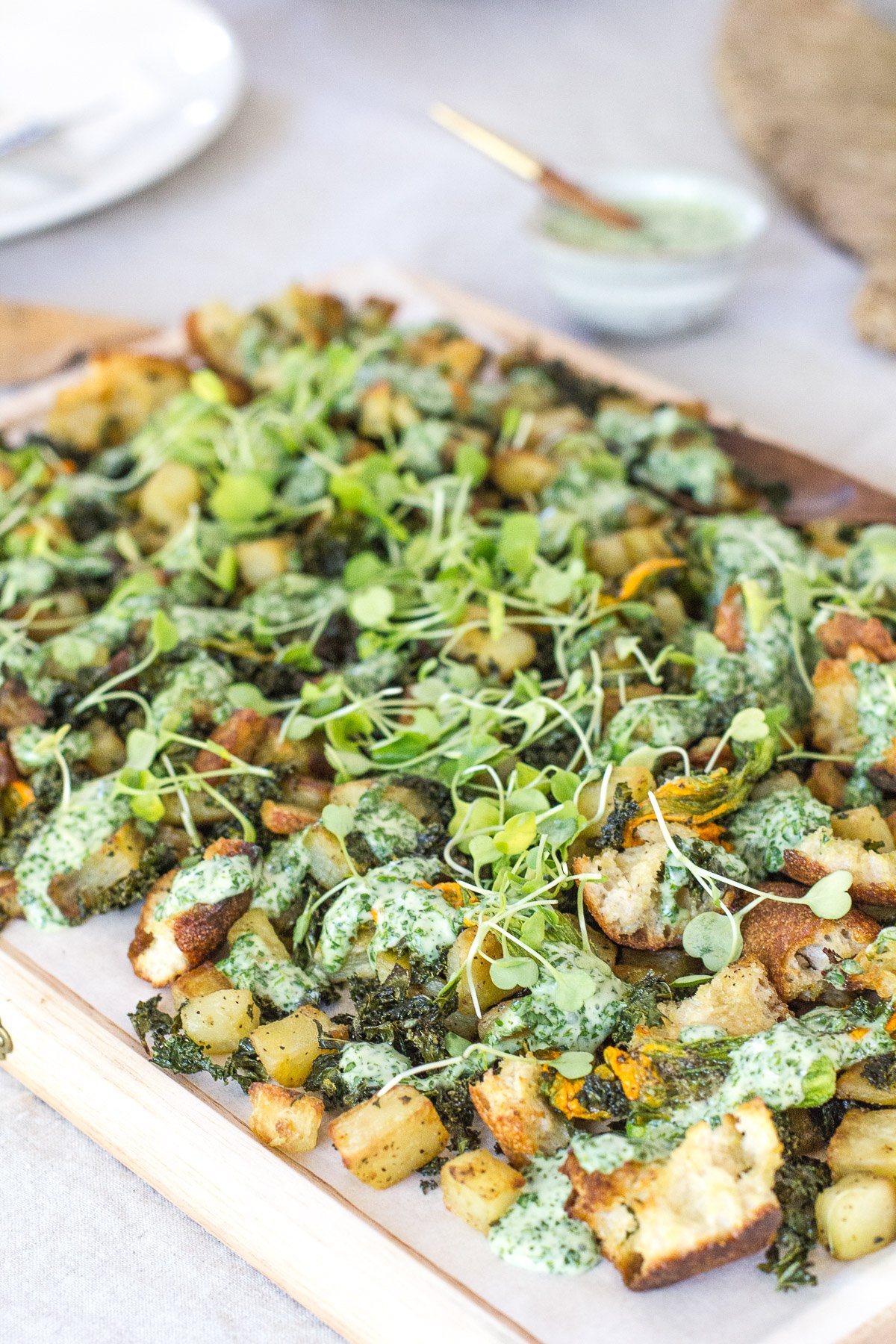 Today I finally had a chance to make my ideal Crispy Kale and Potato Hash. We decided while we were at Wholefoods to do a seafood boil and I thought, instead of just boiling the potatoes – it would be nice to have them crispy instead. 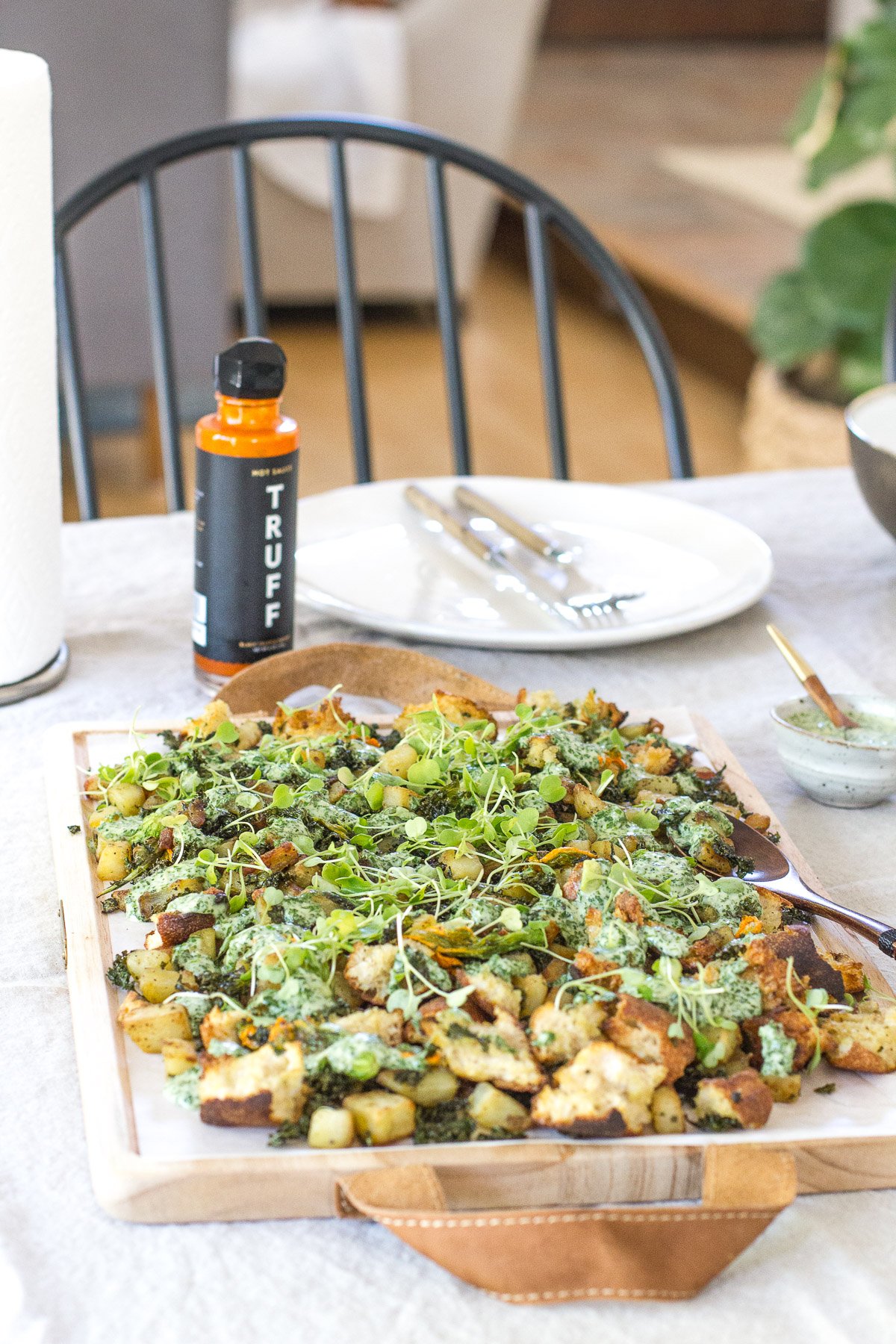 How to get Crispy Potatoes

The key to crispy potatoes is the prep.  Peal and cube the potatoes and rinse them until the water is clear.  This gets rid of some of the starch.  Then I dried them with a dish cloth.  This is a very, very important step to get that crisp.

To get them nice and brown I started by pan frying cubed potatoes in some Truffle Ghee until they started looking fluffy.  Then I transferred them into a large sheet pan with capers and roasted them until they were nice and crispy.  About 20 minutes.

The kale is added in just before the potatoes are finished as they don’t take that long to cook.  The kale was shredded and then massaged with garlic paste and olive oil.  You then mix it in with the potato and roast for another 10 minutes. 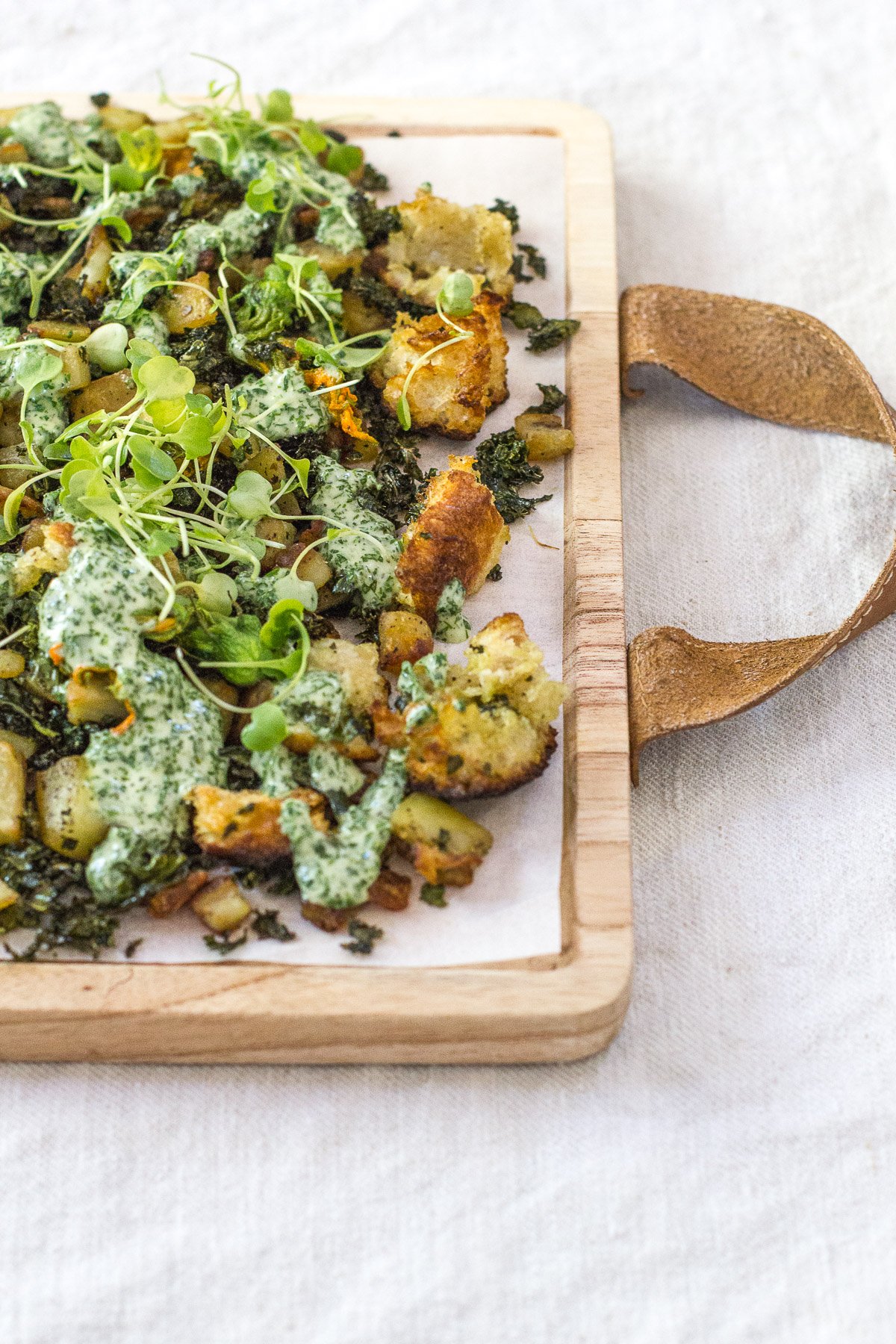 I also like adding in some bread that has been drizzled with olive oil in the hash for another crispy dimension. 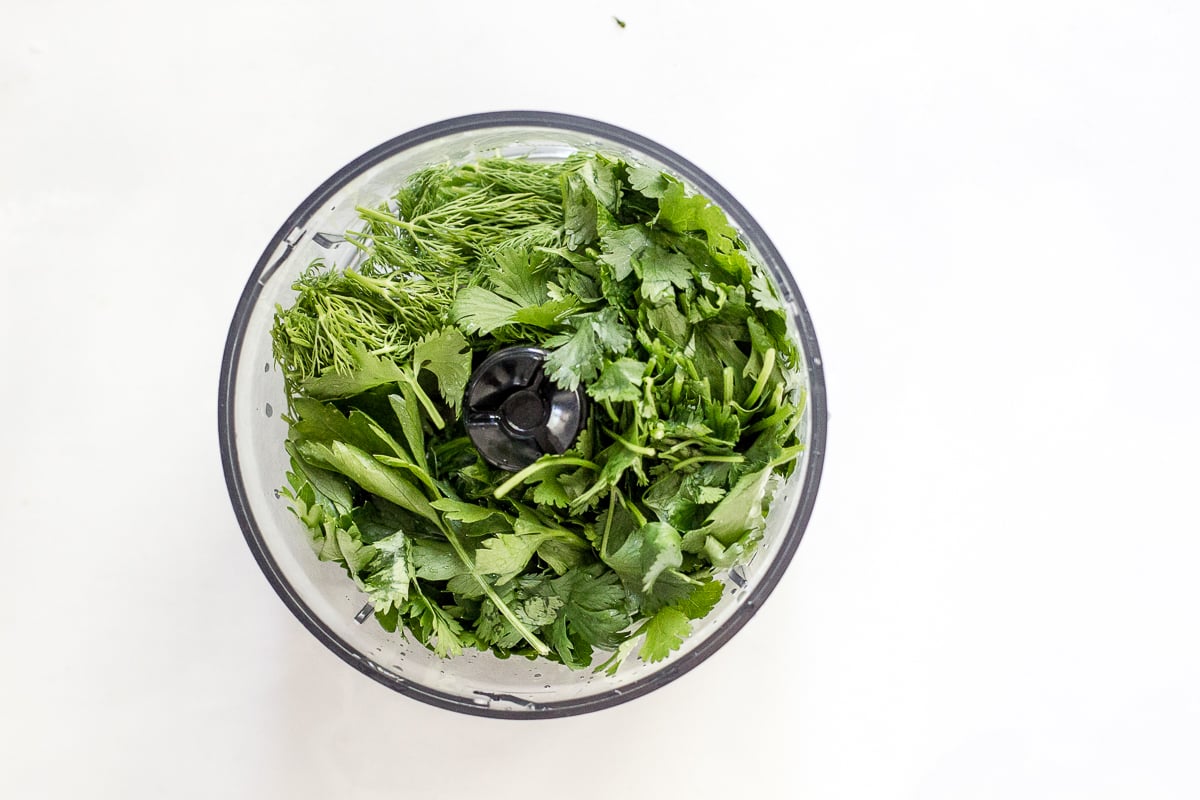 For a touch of freshness I made some green goddess dressing to drizzle over the kale and potatoes.  All you do is put in some herbs such as parsley, cilantro and dill (really anything green you have) and blitz it with some vegan mayo, a little apple cider vinegar and a touch of oil and salt and pepper.

This was so perfect with our seafood boil.  The seafood was just lightly seasoned and having these potatoes that were so full of flavor was just the right accompaniment.  It was a great dinner. 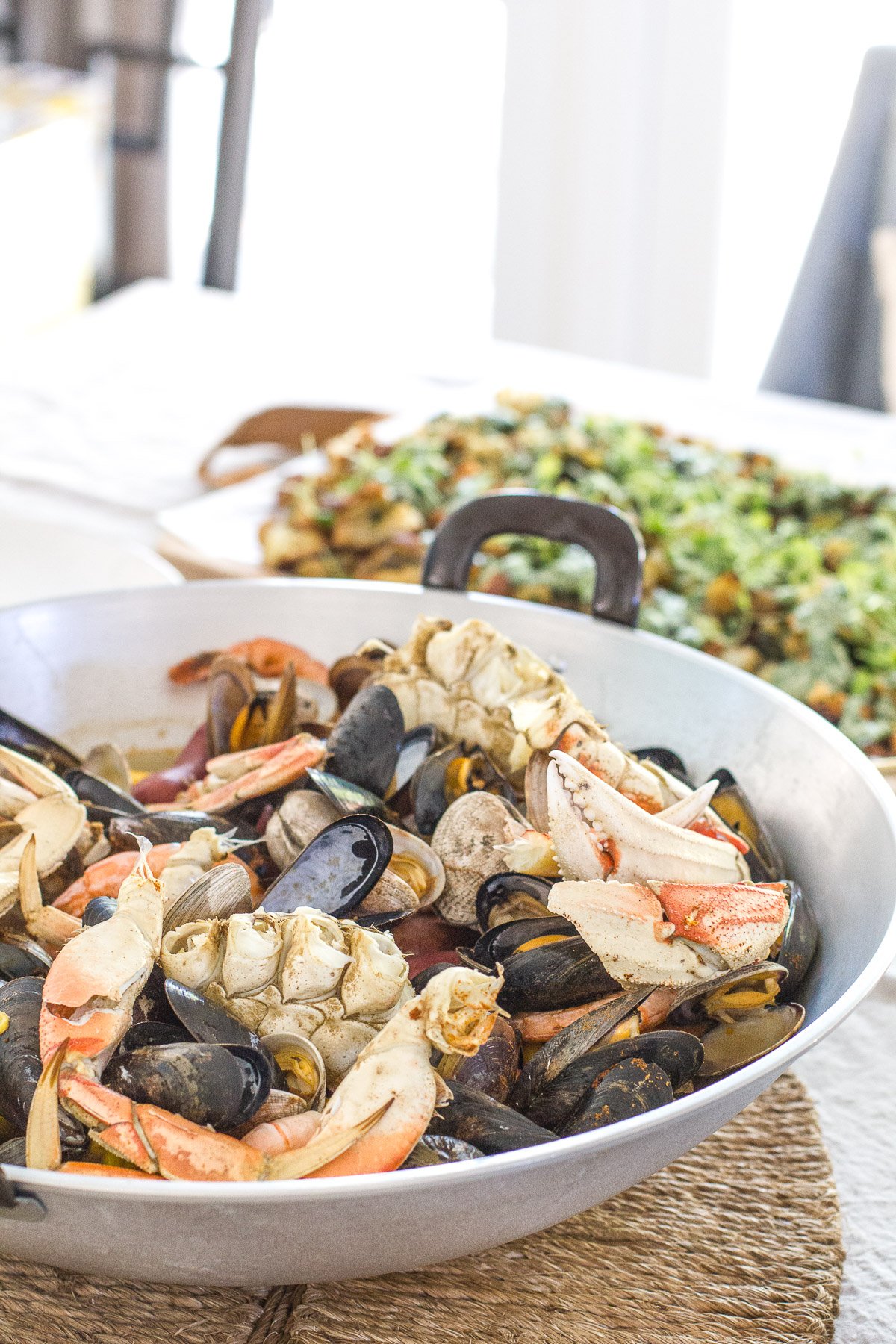 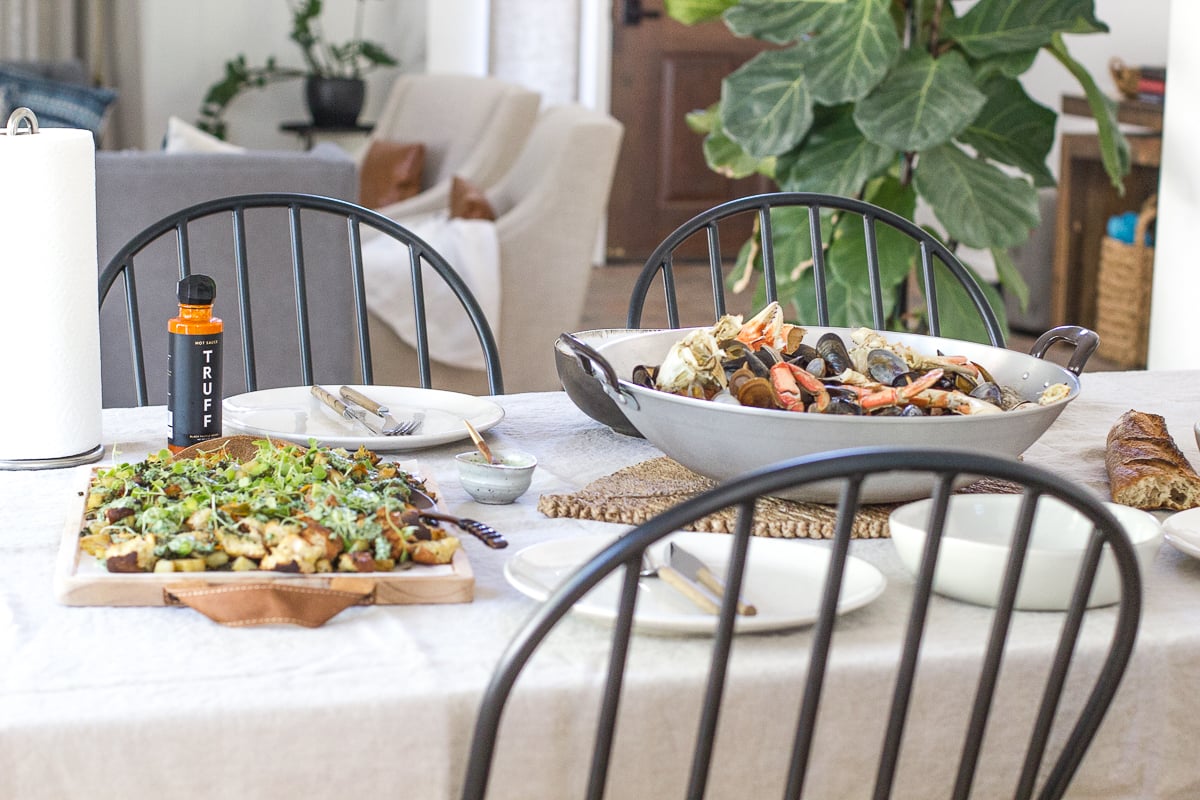 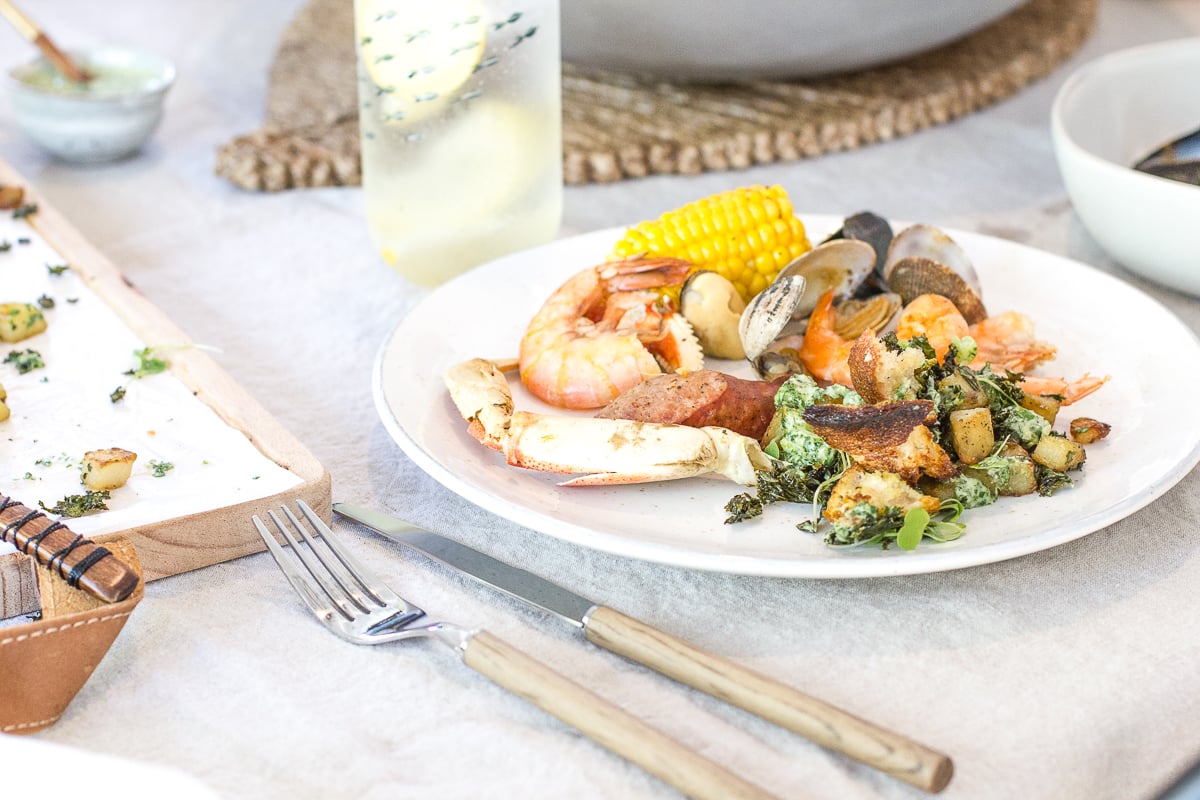 For other weeknight meal ideas you can also read these posts No Recipe Pantry Dinner with Pasta and Two Side Dishes and My Meal Prep Menu for the Week.