Matamis Na Bao (Coconut Jam) Cake is made with a box mix (yes really!) and simply frosted with coconut jam.  It’s a quick and nice treat to have during the week. 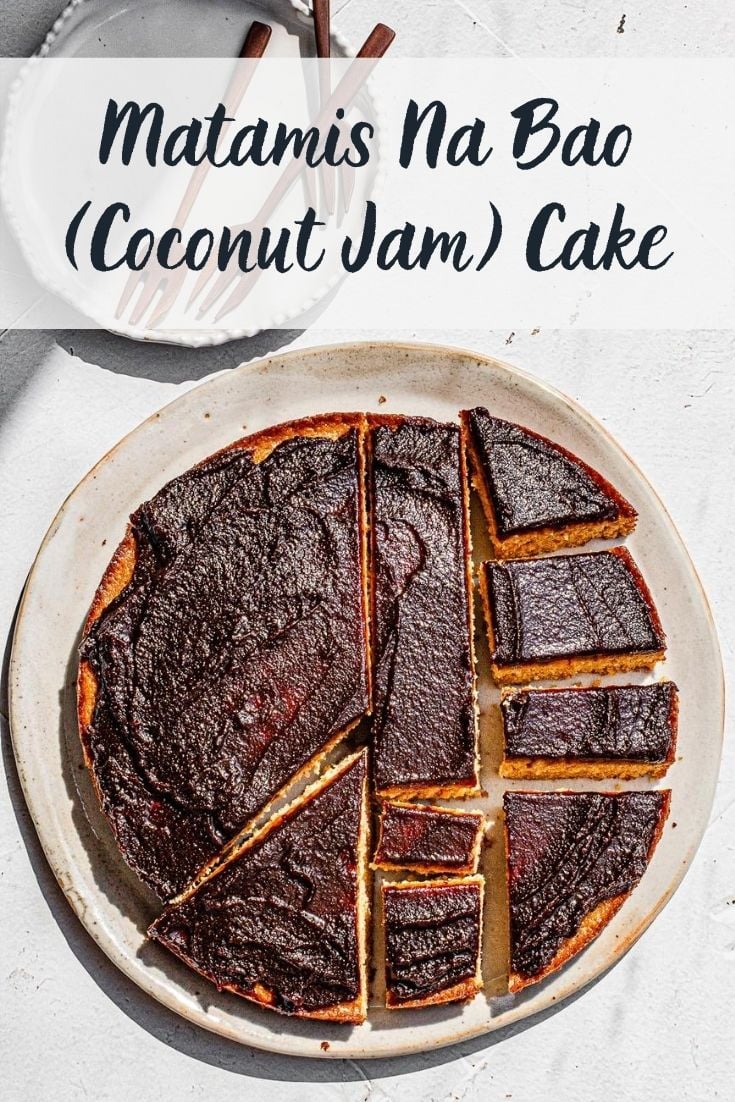 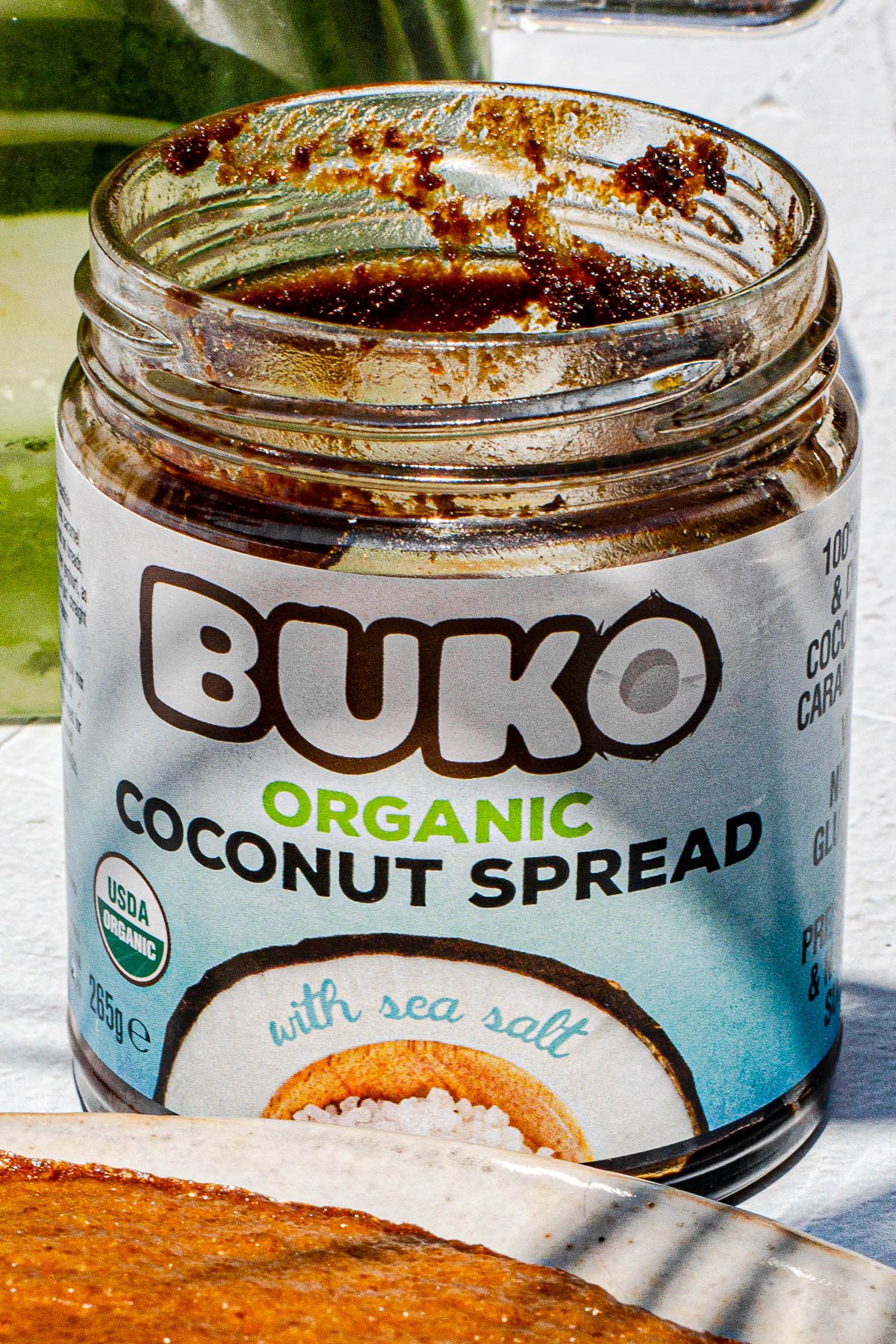 What I love about this particular jar is that it only has 2 ingredients.  Coconut Cream and Coconut Nectar.  Coconut nectar is the sap from flowers of the coconut palm.  Eventually it’s processed to become coconut sugar.  So it’s even better for you.  If you are watching your sugar levels it’s a low GI sugar coming in at 35 as opposed to white cane sugar which is closer to 70.

As I mentioned in my intro I used a box mix.  I’ve used it many times and have no shame, you should not either.  In these times we need all the help we can get in the kitchen.  There is no need to be a kitchen hero right now.  As far as which one to use you can use any kind you want.  I love Simple Mills if I really want it to be super nutritious.  If I want more of a treat then I go for Miss Jones Bakes.  Which is what I used in this recipe.

Using the Vanilla Flavored cake mix, I swapped out the regular milk to coconut milk and the butter to coconut oil.  Using the same quantities as indicated in the instructions on the back of the box.  I added 2 heaping tablespoons of the Coconut Jam into the batter and mixed it well.  Adding the coconut jam to the melted coconut oil is recommended to take out the lumps.

The mix that I used made two 9 inch cakes.  What is great about that is you can freeze one to eat later and eat one now!  I baked the cakes for 20 minutes and let it cool too room temperature. 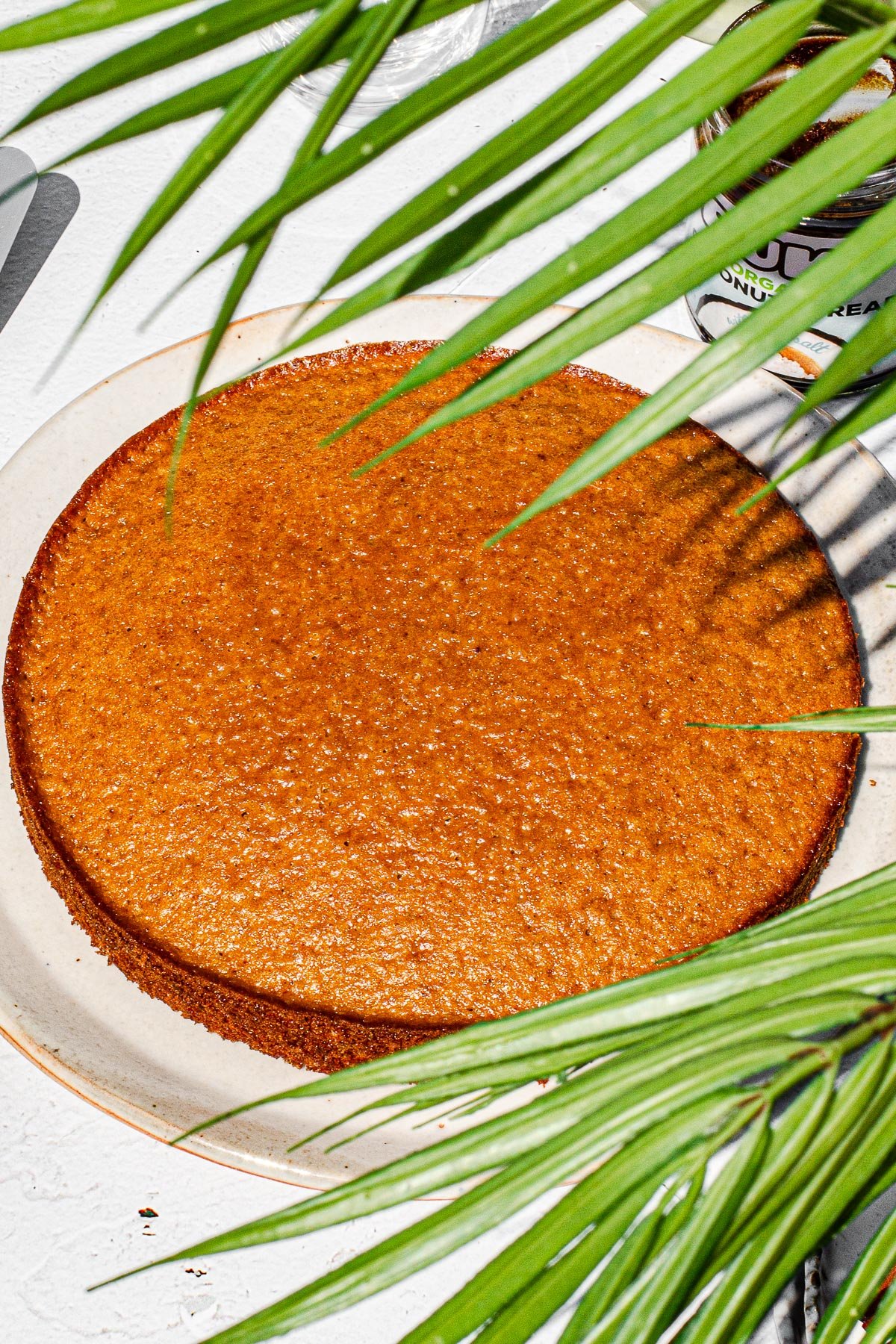 Once it is cool take the remaining jam and smear it all over the top like frosting. 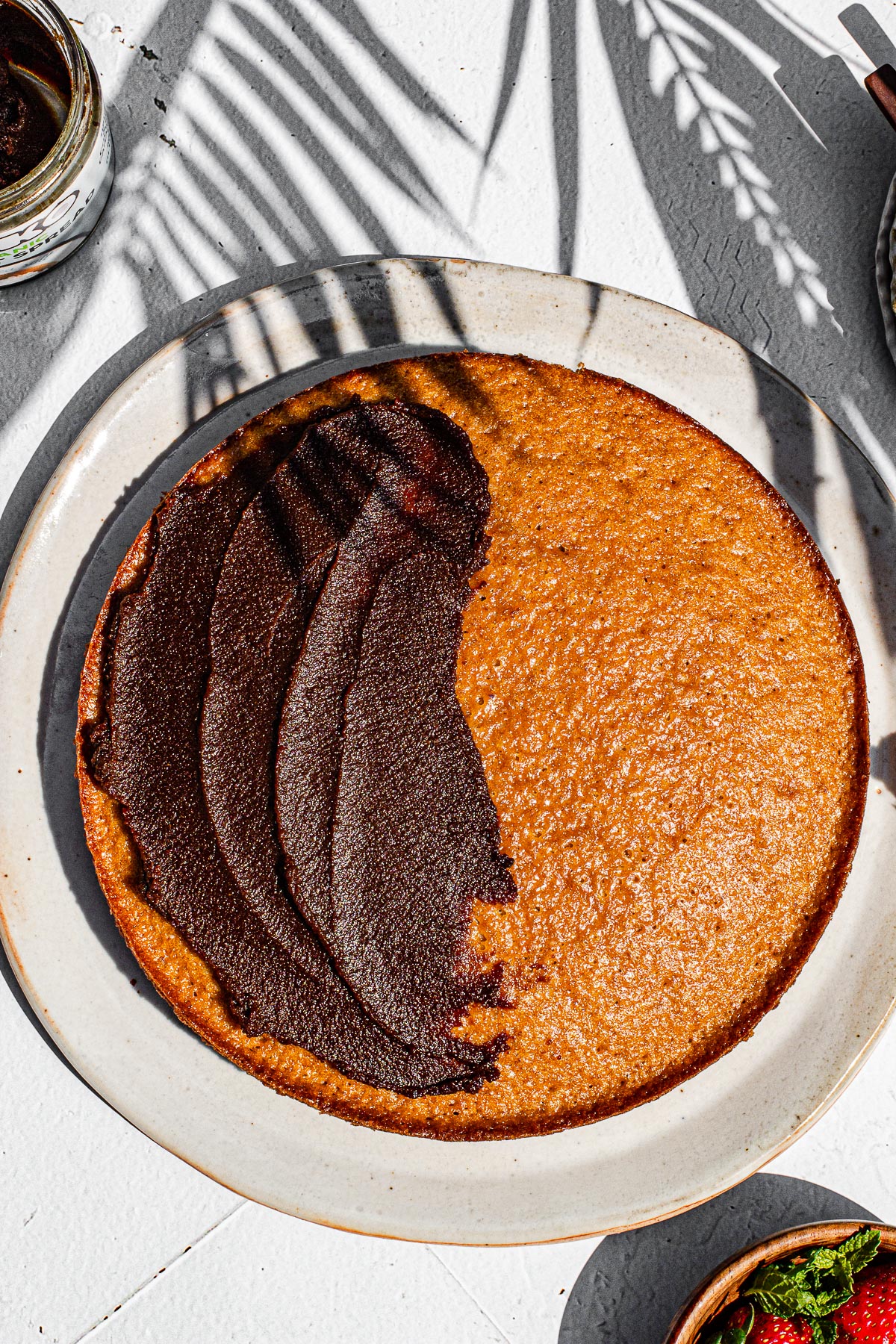 Trust me it’s so good.  If you like coconut, it’s almost like eating a coconut flavored caramel cake. 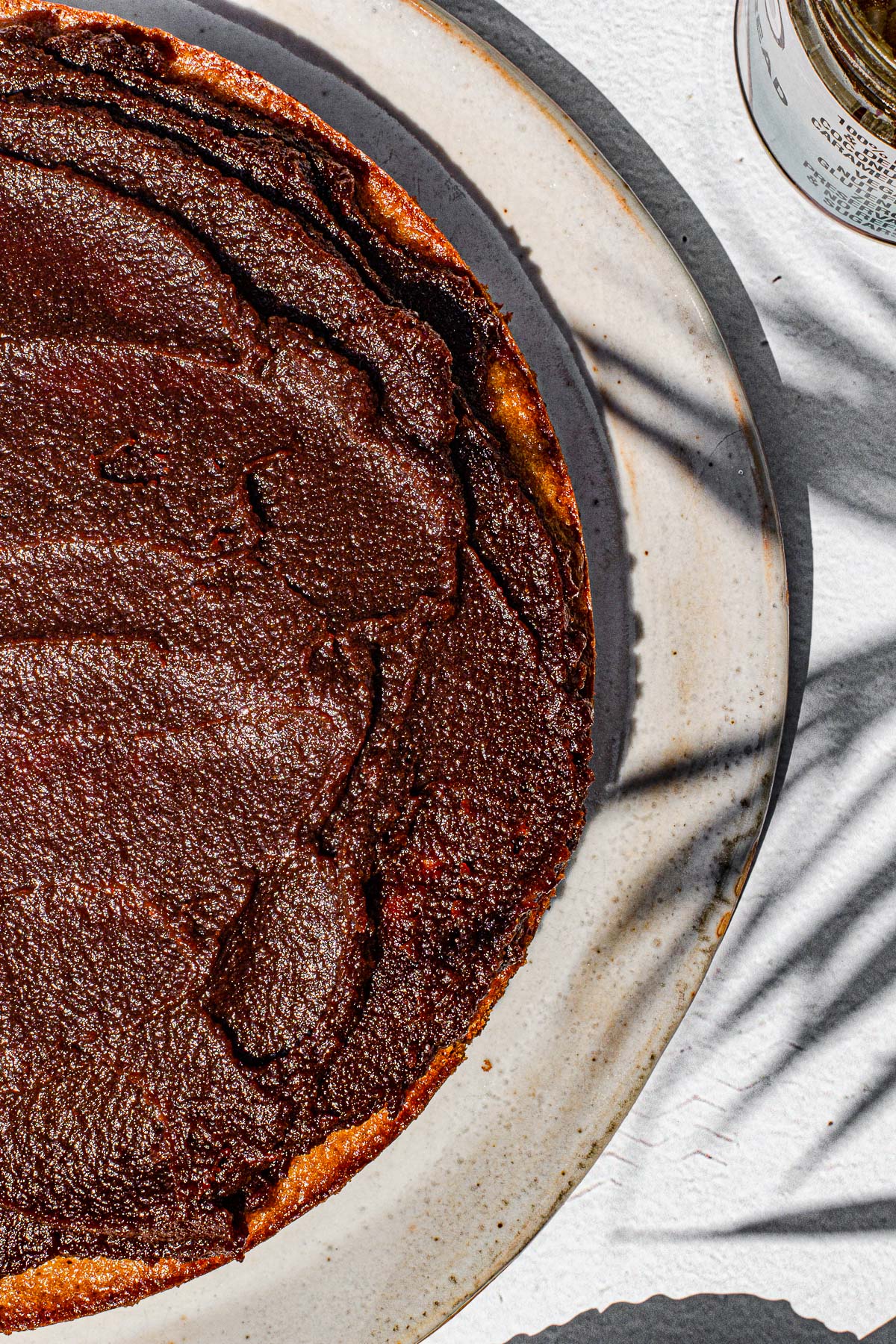 How To Serve The Cake

It’s great with summer berries on the side. 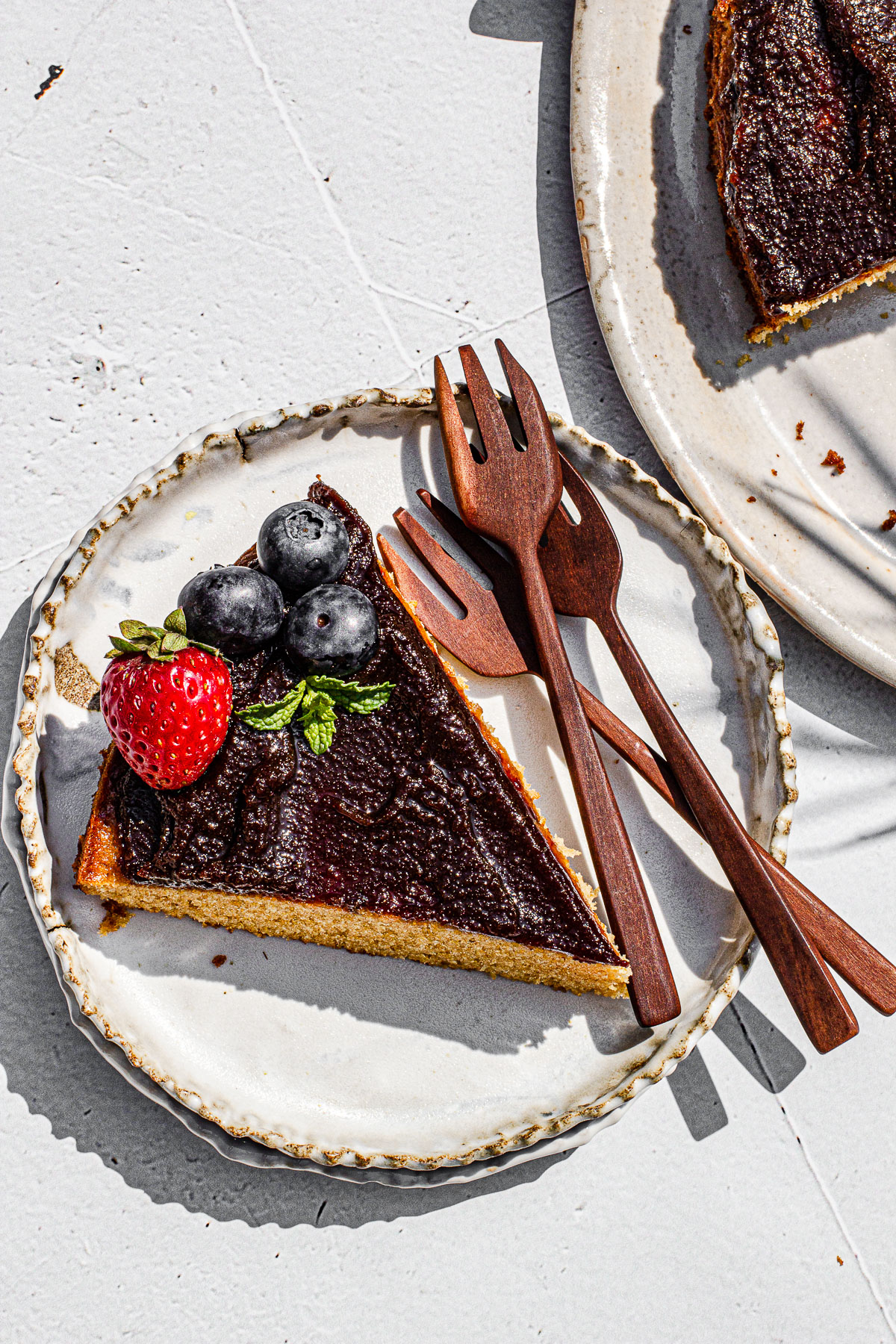 To be honest, we just at it as is.  We left it on the counter and we just cut off pieces of cake to nibble on. 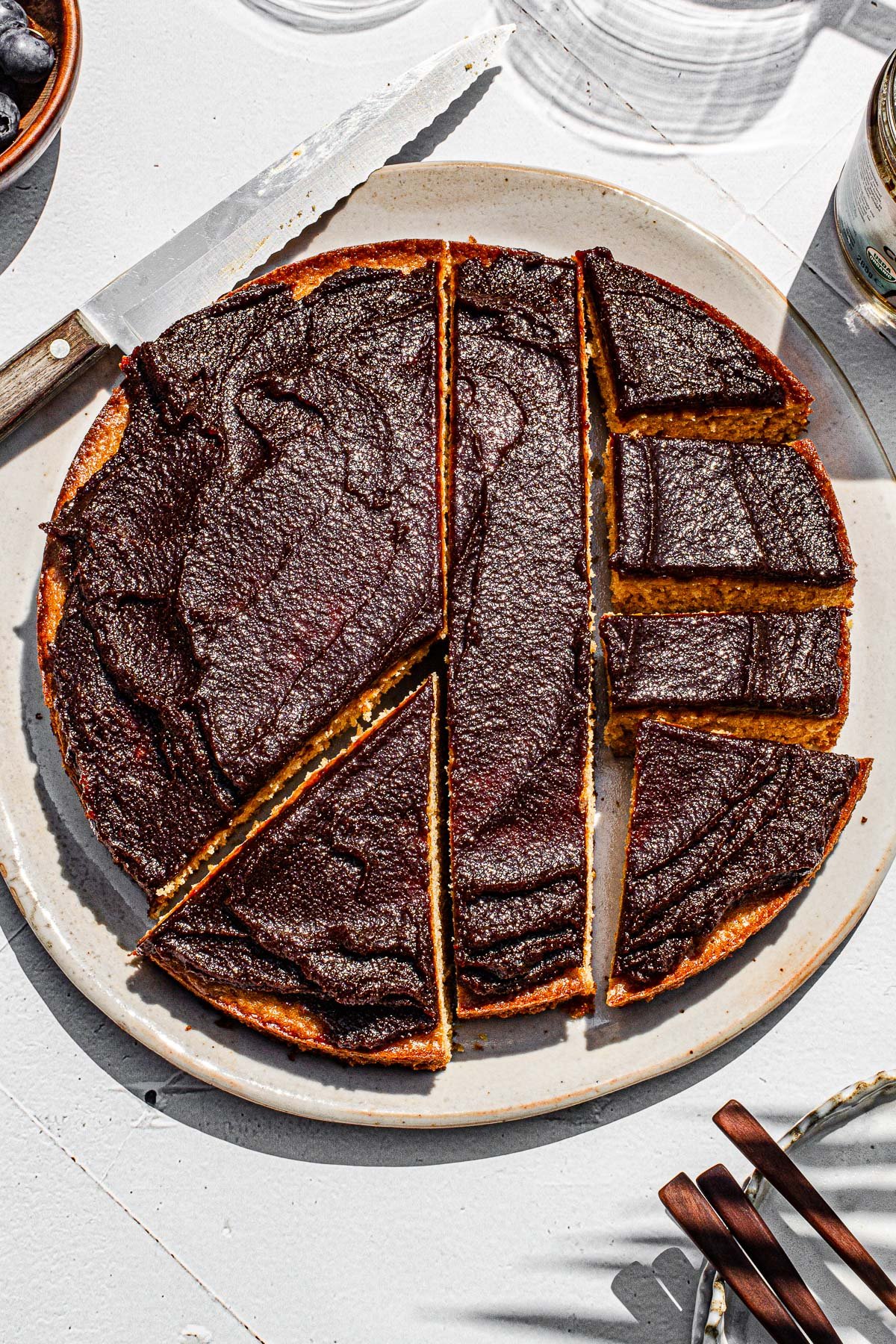 How To Store The Cake

As I mentioned above my box mix makes two 9 inch cakes so you have the choice to freeze one and eat one.  It keeps on the counter for 3 days.  If you think you will need more time to eat it, I would just put it in the refrigerator and it will keep longer to 5 days.  You can pop it in quick in the microwave for 10 seconds to refresh it.

Other Filipino Inspired Desserts For You To Try

You can use any cake mix.  Just adjust the quantities of the wet ingredients if needed. My favorites are Simple Mills and Miss Jones Baking Co. I used Miss Jones Bakes in this recipe which makes two 9 inch cakes so you have the choice to freeze one and eat one. It keeps on the counter for 3 days. If you think you will need more time to eat it, I would just put it in the refrigerator and it will keep longer to 5 days. You can pop it in quick in the microwave for 10 seconds to refresh it. You can purchase the Matamis Na Bao (Coconut Jam) made with coconut nectar at Chibundle.
Did you enjoy making it? I would love to see it! Tag me on Instagram @rezelkealoha with the #rezelkealoha! 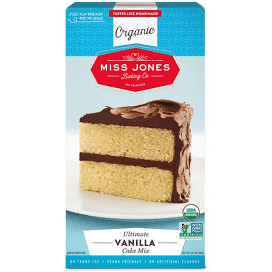 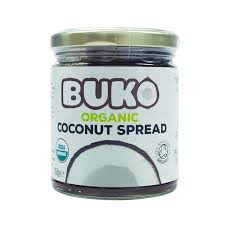 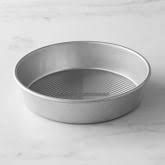