Kalamay is a Filipino sticky rice delicacy made with just coconut milk, sugar and ground glutinous rice.  In this version black sesame is added for additional flavor and crunch. 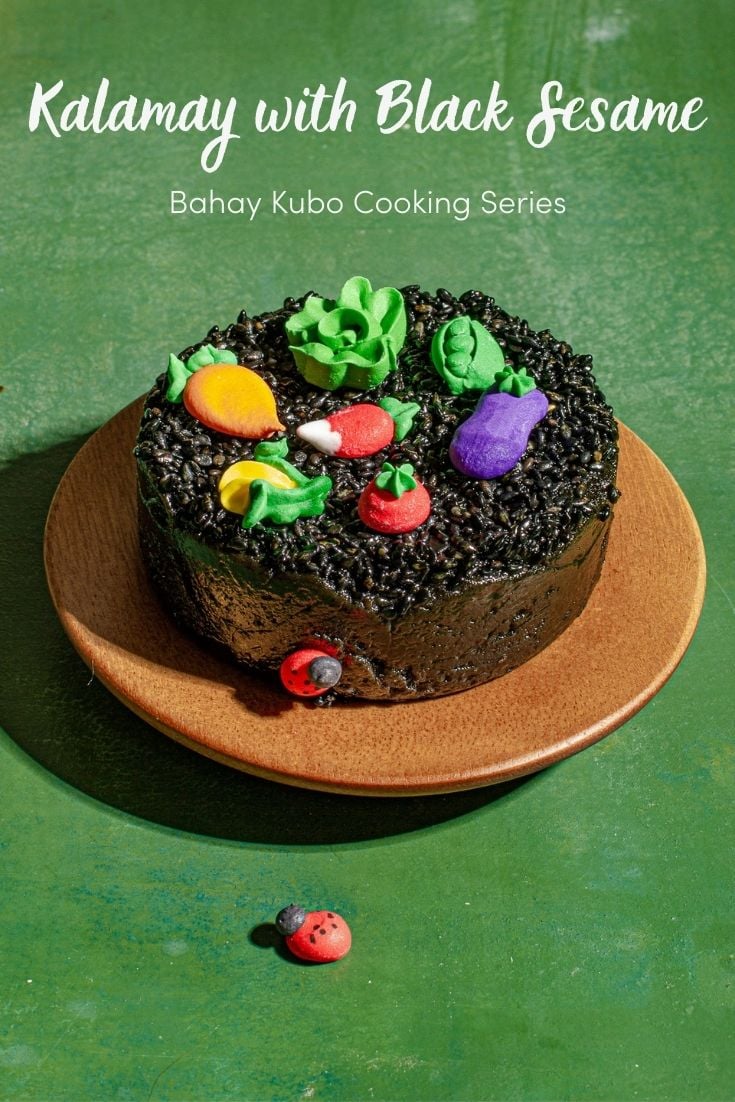 This is it, the last recipe in the Bahay Kubo Cooking Series!  We did it!  The very last vegetable is Linga or sesame seed. 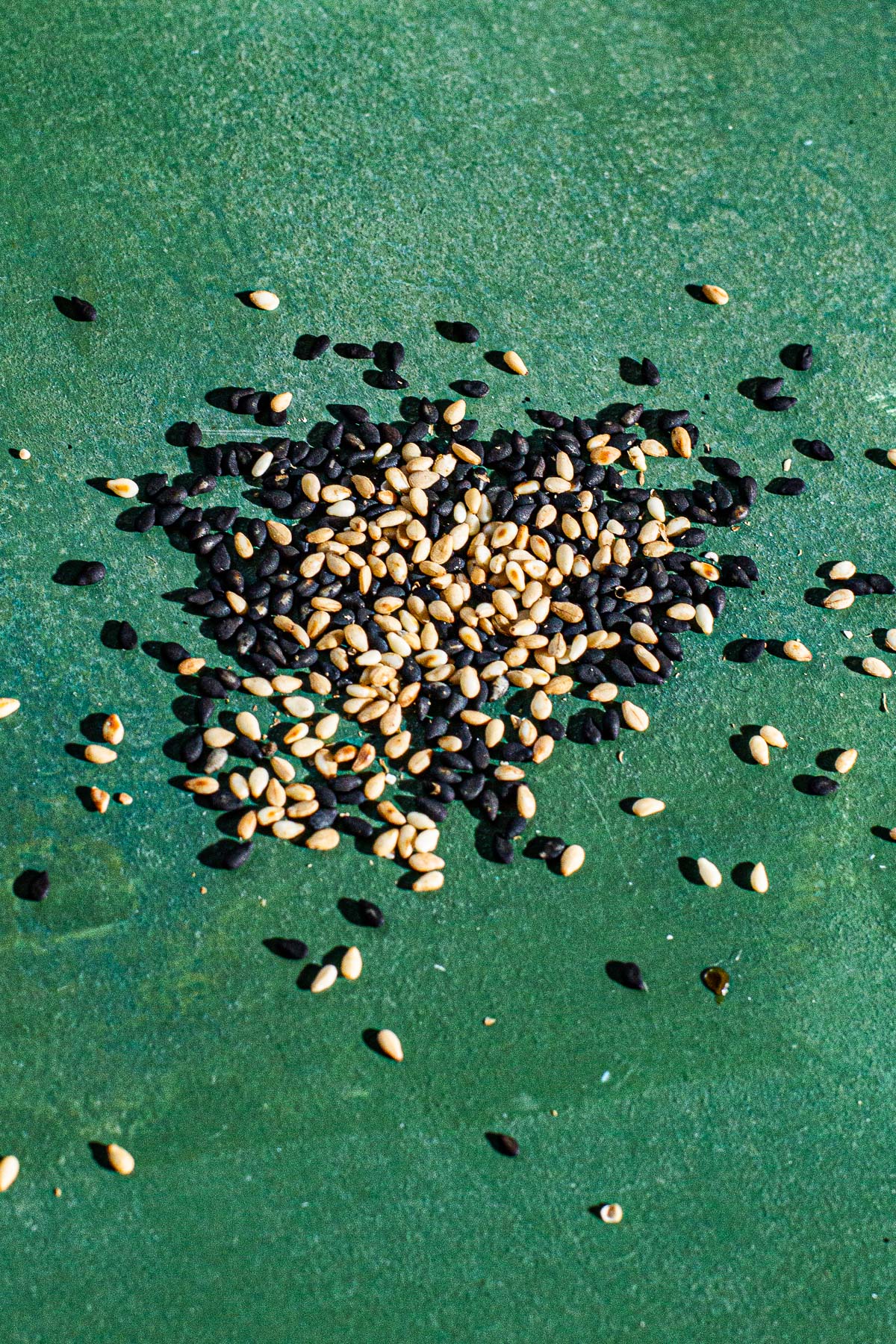 I have to say it was quite hard to find or think of a recipe for this one.  It’s in the song, but truthfully, I don’t remember any of my Lola’s cooking with it.  May-be just as a topping in palitaw, but that’s it.  I wanted to make a final recipe celebrating the song and using as much sesame as possible.  It’s really the perfect time to make time consuming Kalamay but with a black sesame twist.  So let’s do it!

What is it you ask?  As with other Filipino dishes Kalamay differs in consistency, toppings and how it is served.  Traditionally it is made with coconut milk, palm sugar and ground glutinous.  So super simple.  It’s then cooked until the right consistency is achieved.  Depending on where it was made it’s more on the runny side that can also be used as a sweetener in coffee and other desserts.

The one that I grew up with was cooked until it was super makunat.  How do I translate that…. until it has that super dense chewy texture where it can hold it’s shape when cooled.  Now let’s make it!

What Ingredients Do You Need?

We are making a small portion that can serve 3-4 people.  All you need are these 5 ingredients to make it. 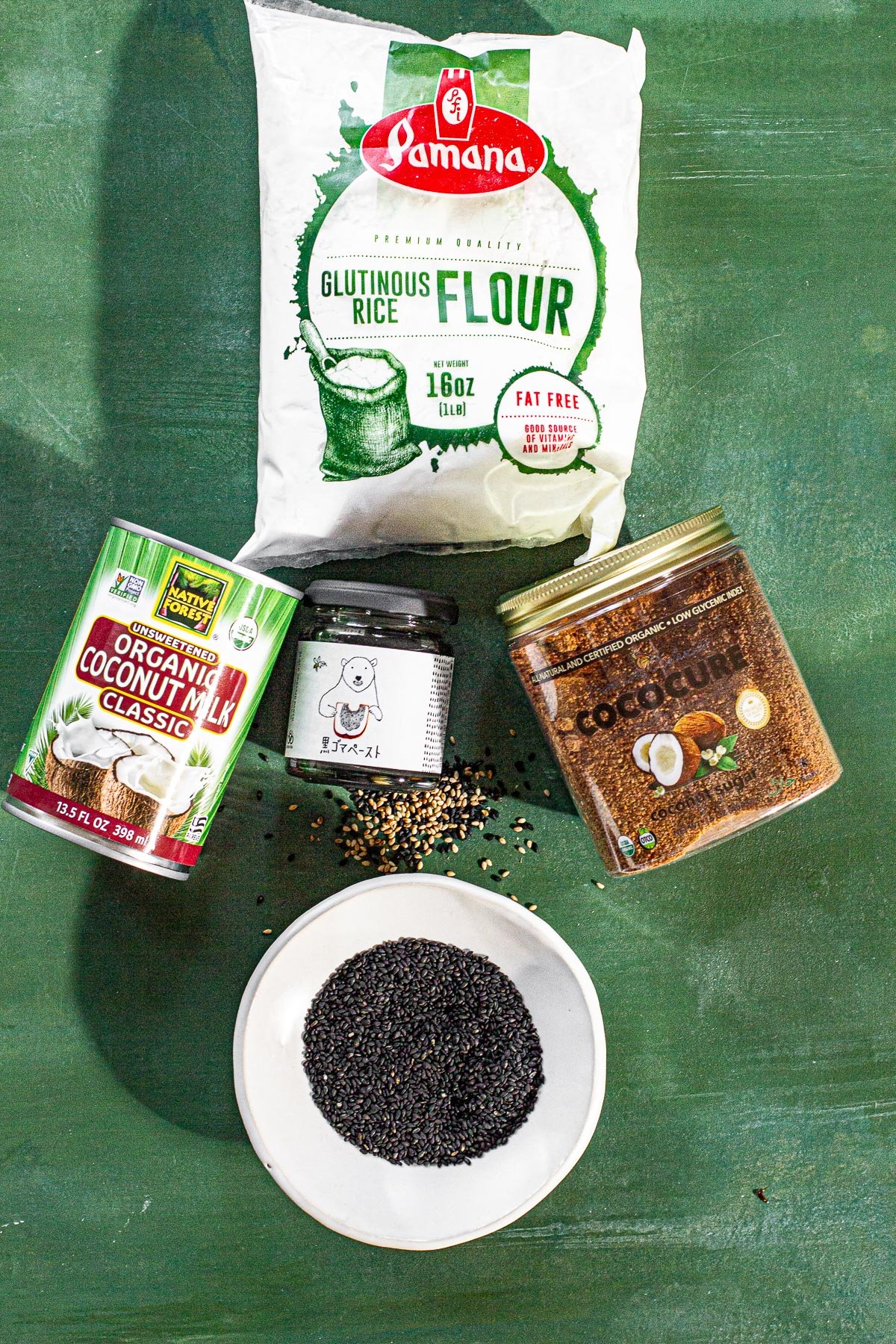 Coconut Milk – There is something magical that happens when you cook with coconut milk.  It gets thicker and starts releasing oils.  Which trust me helps in this recipe.

Coconut Sugar – In this recipe we are replacing the palm sugar with coconut sugar.  I think it tastes the same and also just a little bit better for you.

Sesame Paste – The key flavor in this kalamay.  As it cooks the flavor gets even more intense.  This is my favorite brand to use.  It’s creamy and not oily like others I have used.

Ground Glutinous Rice – The binder and the maker of all things gooey.

Sesame Seeds – We will use this for presentation purposes and crunch.

How Do You Make Kalamay?

First pour in the coconut milk in a non stick pan.  Really don’t use anything else.  A non stick pan will be so helpful.

Then add in the coconut sugar and leave to dissolve for about 5 minutes.  After 5 minutes add in the black sesame paste and stir well. 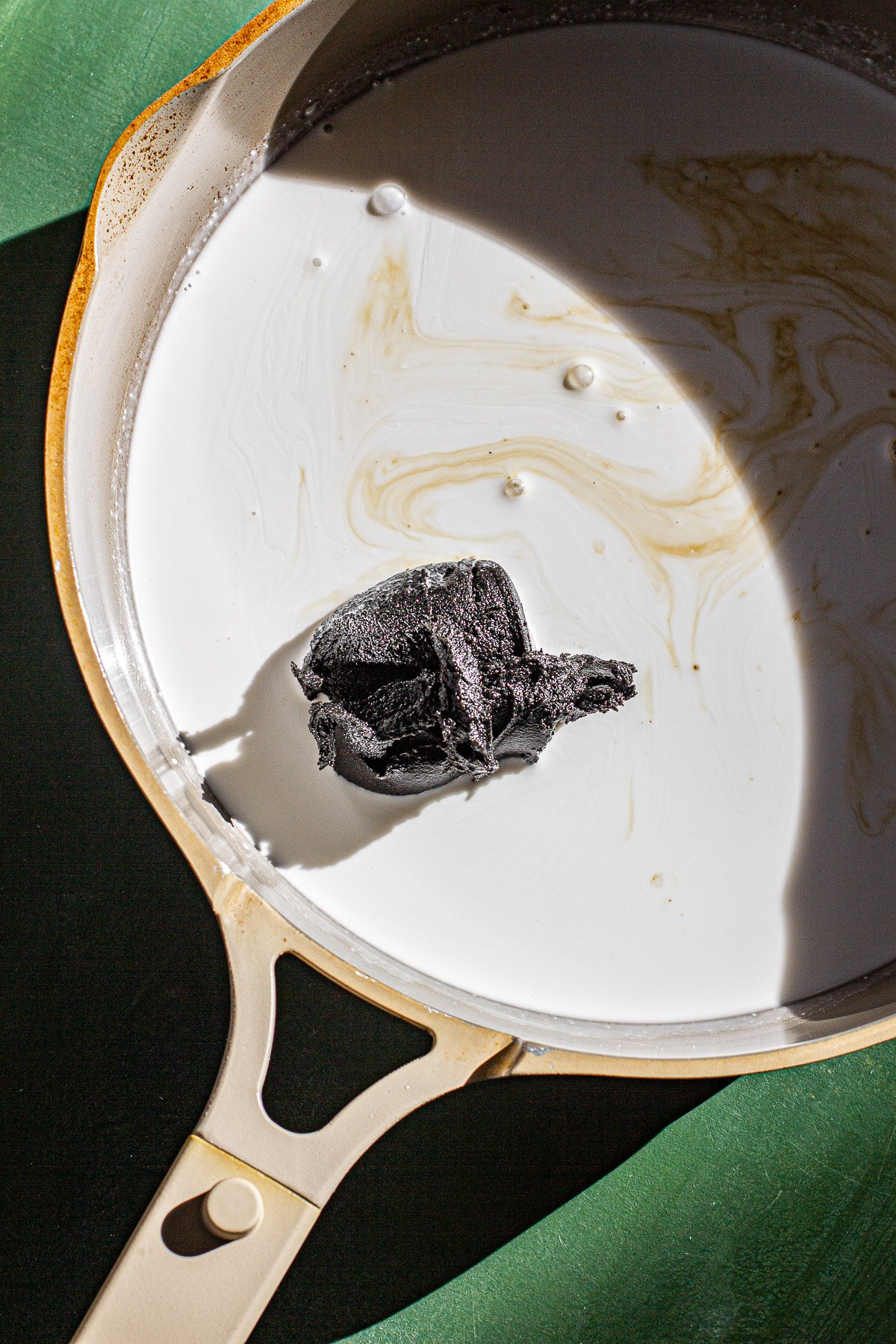 Next add in the ground glutinous rice and mix until there are no lumps. 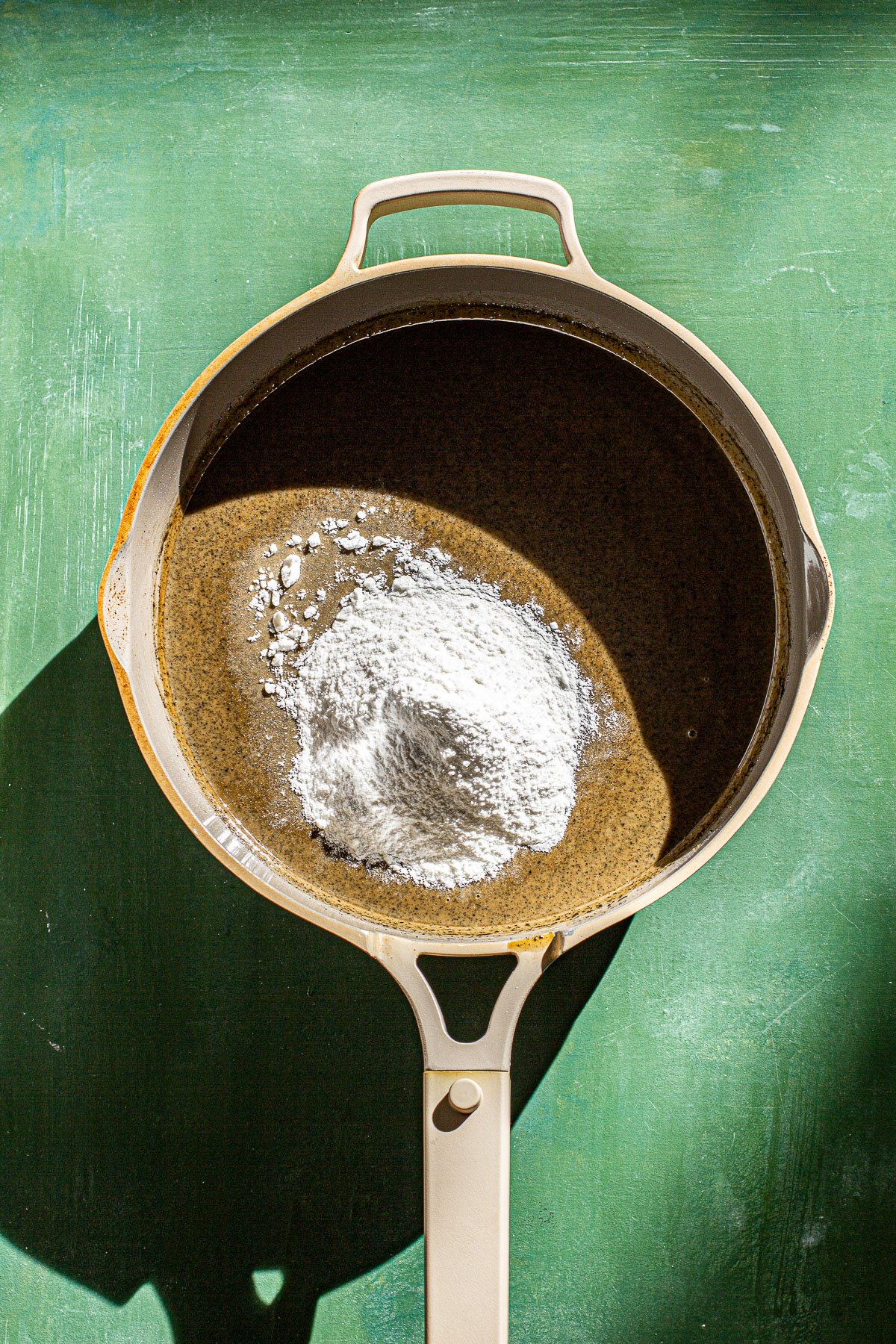 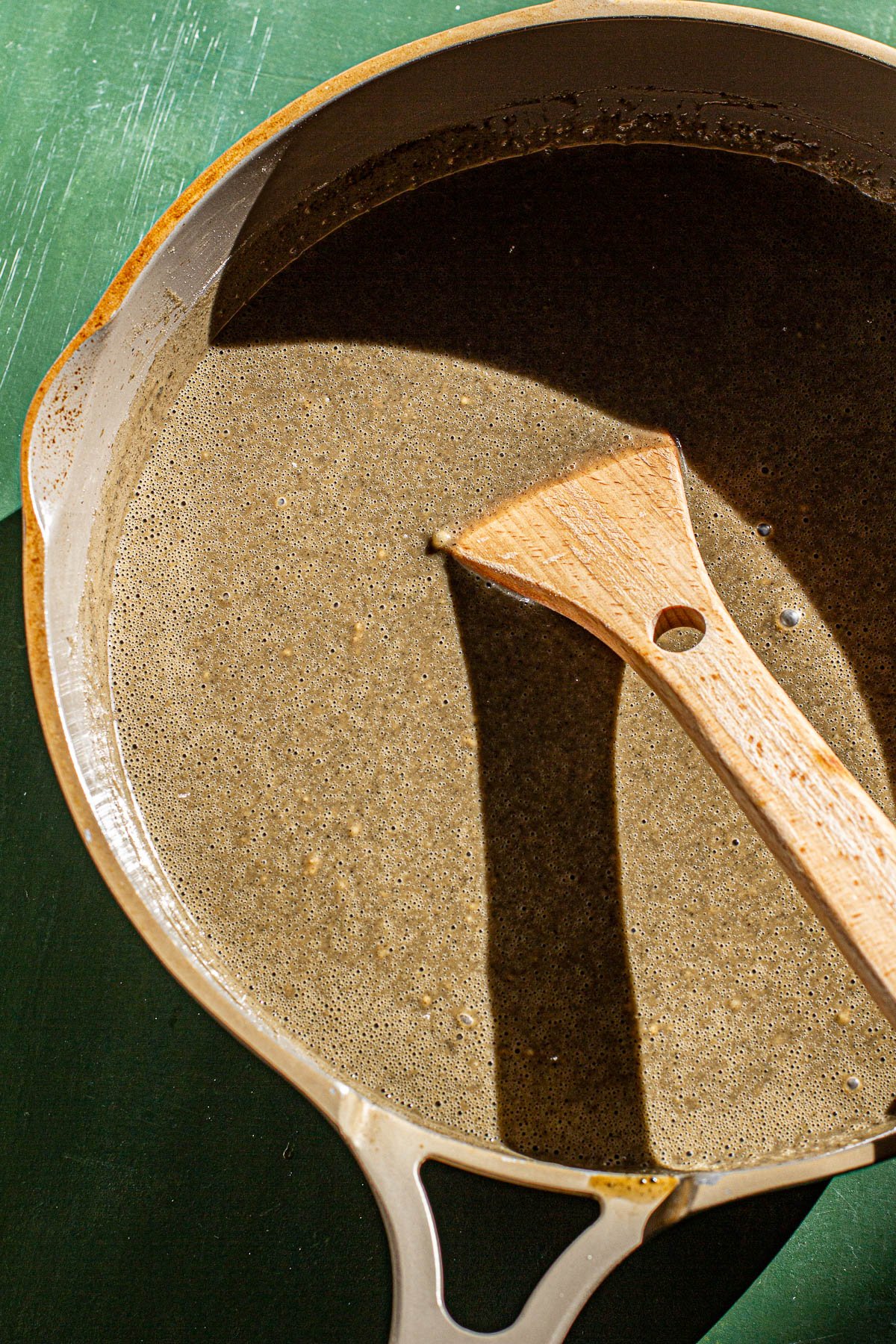 Now is the hard part.  You need to keep stirring the mixture until it starts to get thick.  As this is just a small portion, it’s not as time consuming as a big batch.  It’s a good time to get a high chair and sit there with a book while you are stirring constantly for about 30-45 minutes.

If you like your Kalamay on the runny side it will be done in about 30 minutes.  If you want it more on the chewy side.  Keep stirring until you see it start pulling together and holding it’s shape when you mold it. You can see below that the coconut milk has started to release it’s oils and the mixture is a bit firm.  Stop at this point and take it off the heat. 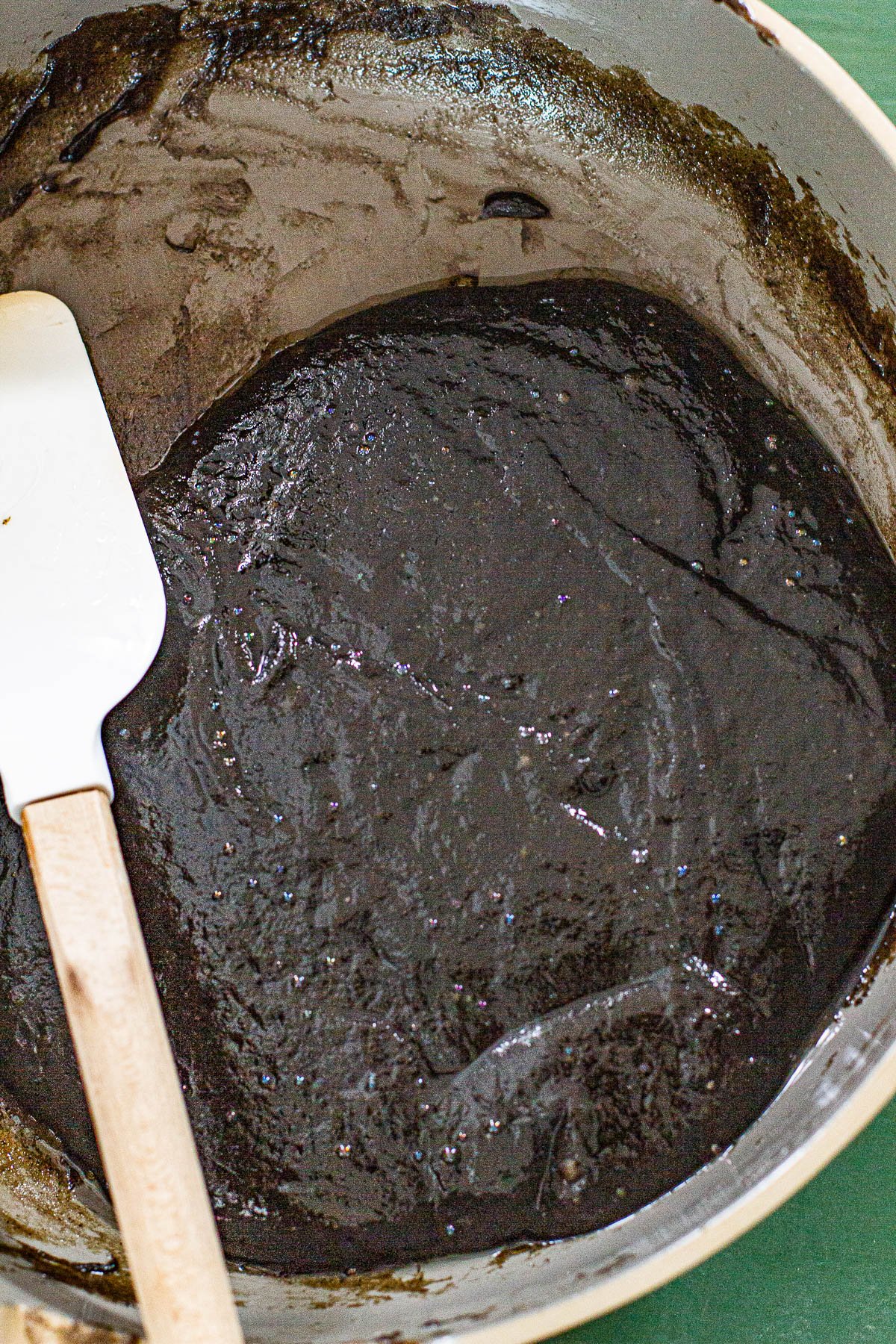 How to serve it

The inspiration for how I plated this is from Toyo Eatery.  They are a high end Filipino restaurant in Manila and are famous for a dish called Bahay Kubo.  Chef Navarra created this magical dish that has all 18 vegetables in it and also managed to make it taste so good.  It’s simply plated looking like a bowl of dirt.  That is the same vibe I am going for here.

Of course you can plate the Kalamay the traditional way by putting a banana leaf on a plate and brushing it with coconut oil and placing the cooked dish on the leaf then sprinkling whole seseme seeds on the top and be done.

However if you want to go and make a faux mound of edible dirt ala Toyo Eatery follow on.

First brush 3 small wooden bowls (about 1/2 cup capacity each) with coconut oil.  Then divide the mixture evenly between the bowls. 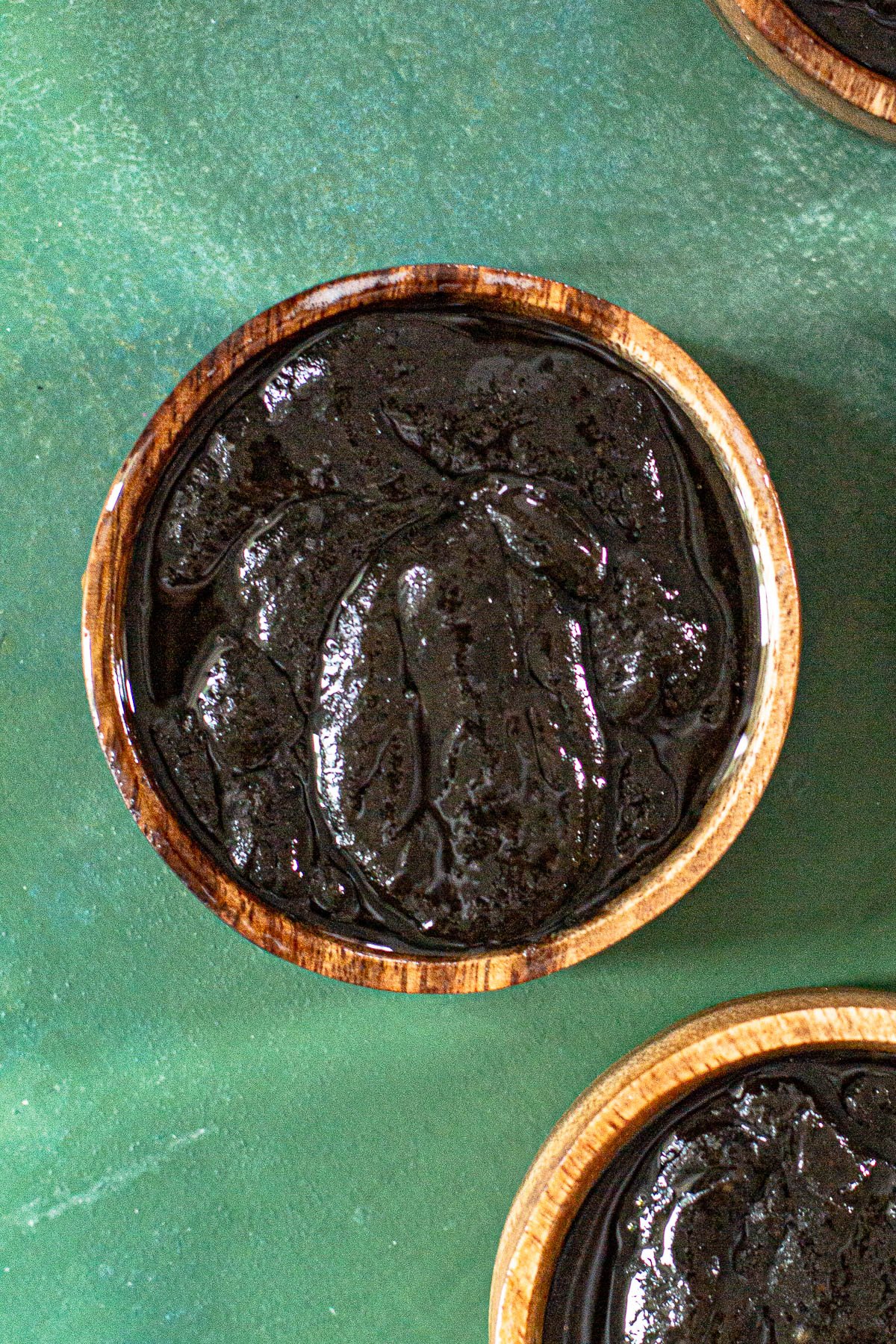 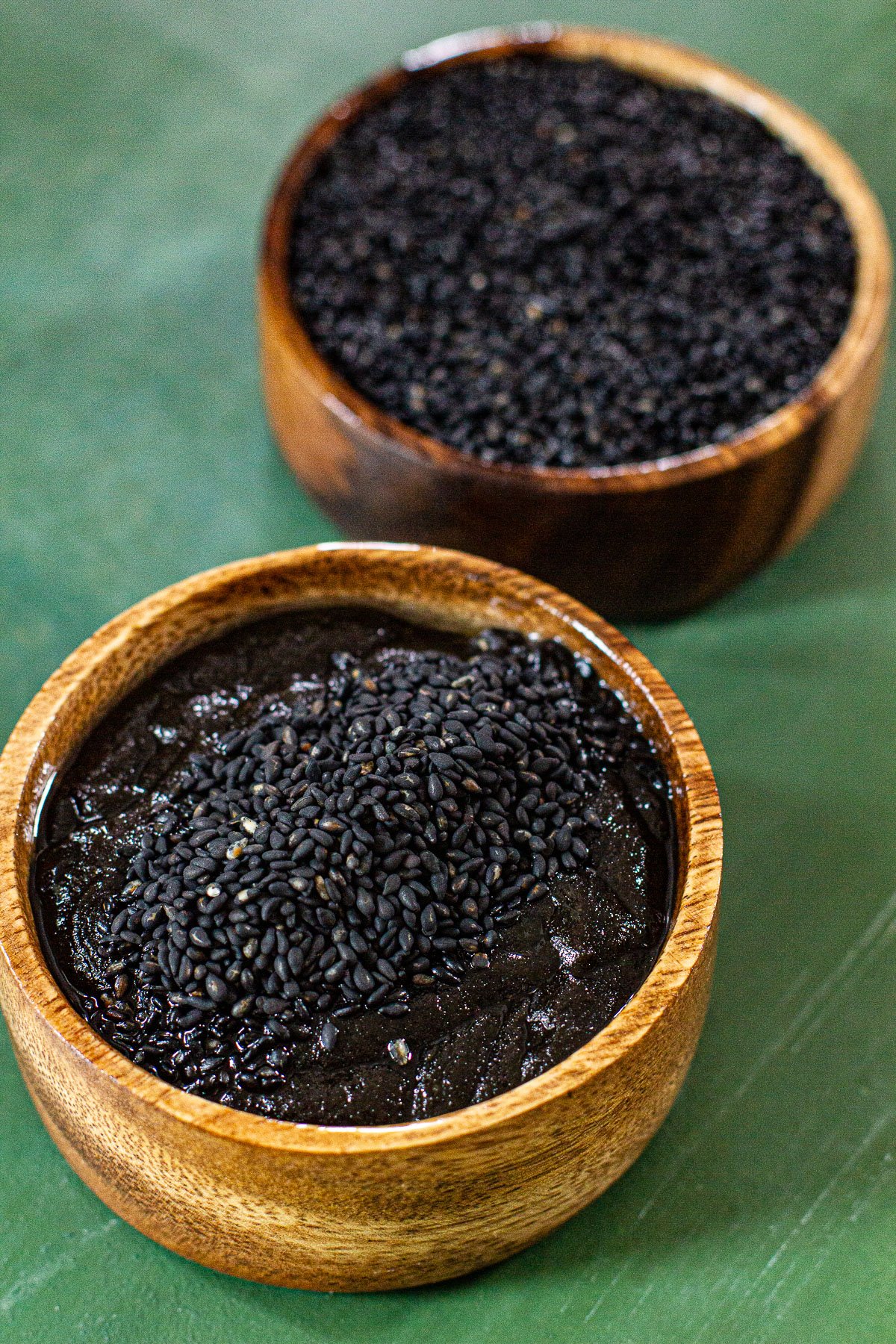 Spread the seeds all over until the Kalamay is fully covered. 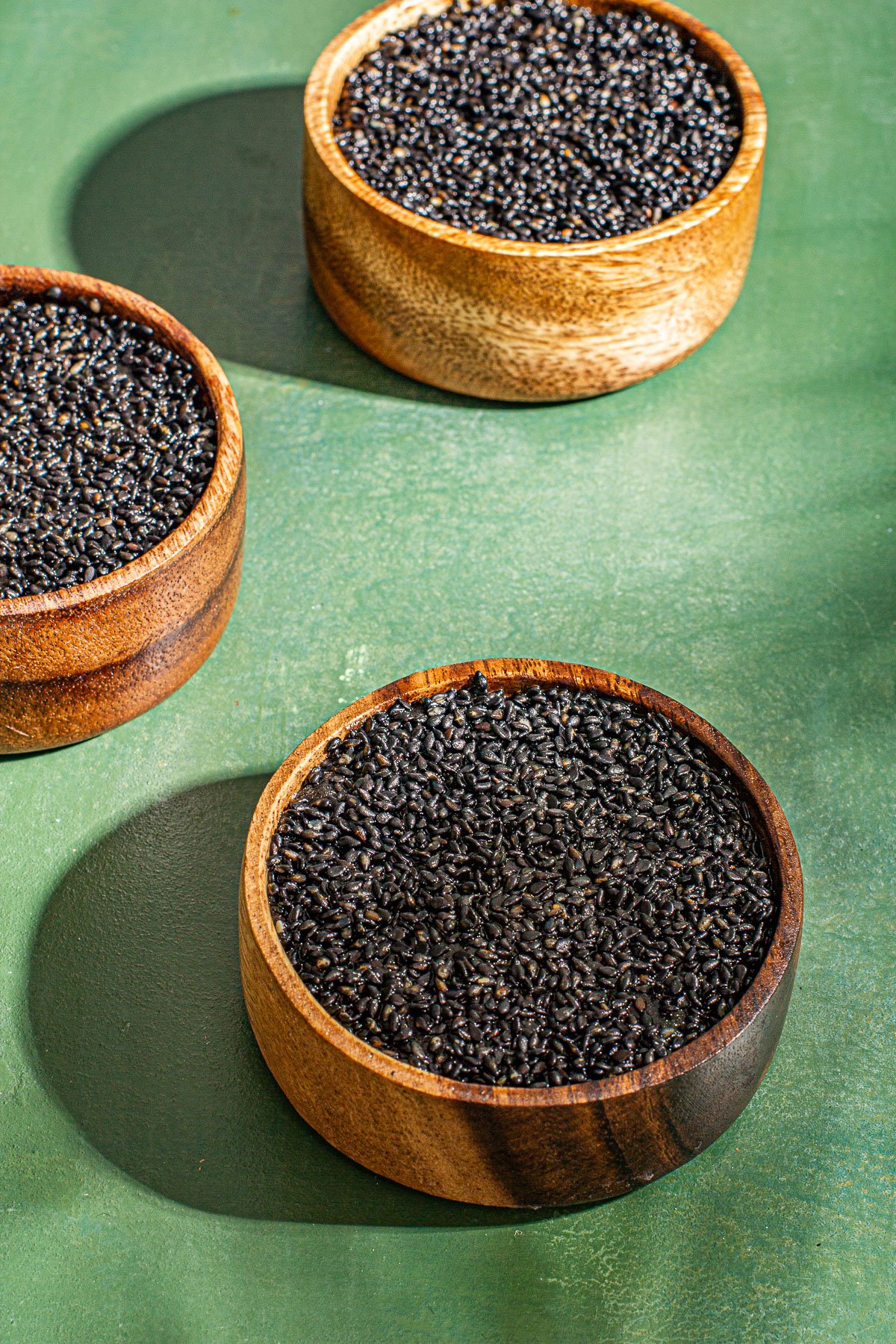 See!  A magic bowl of edible dirt!  I took the extra step of finding these mini sugar vegetables to make a little garden.  Oh so adorable!

All that is left to do is to go a head and blow away your household with this super simple, yet stunning delicacy. 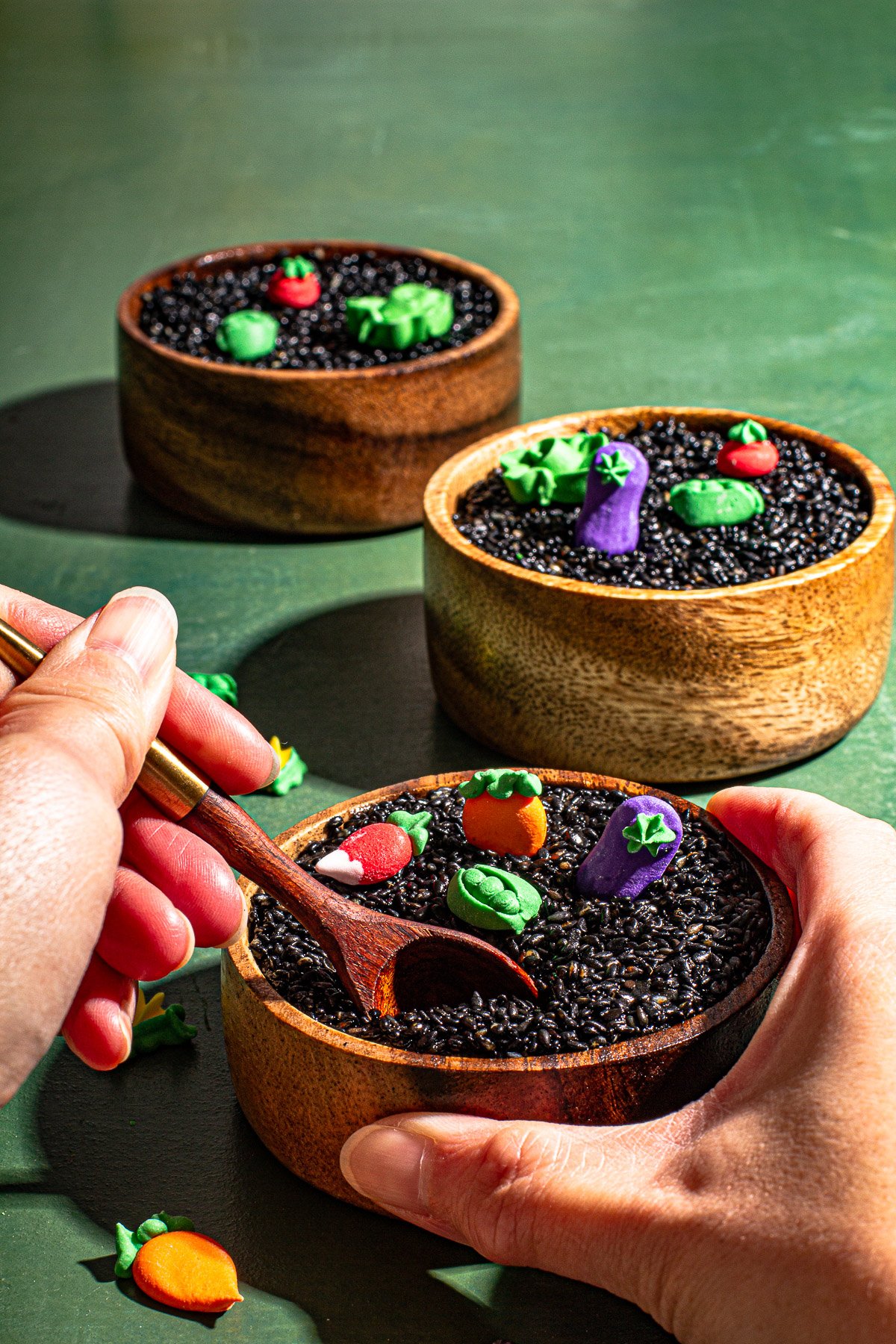 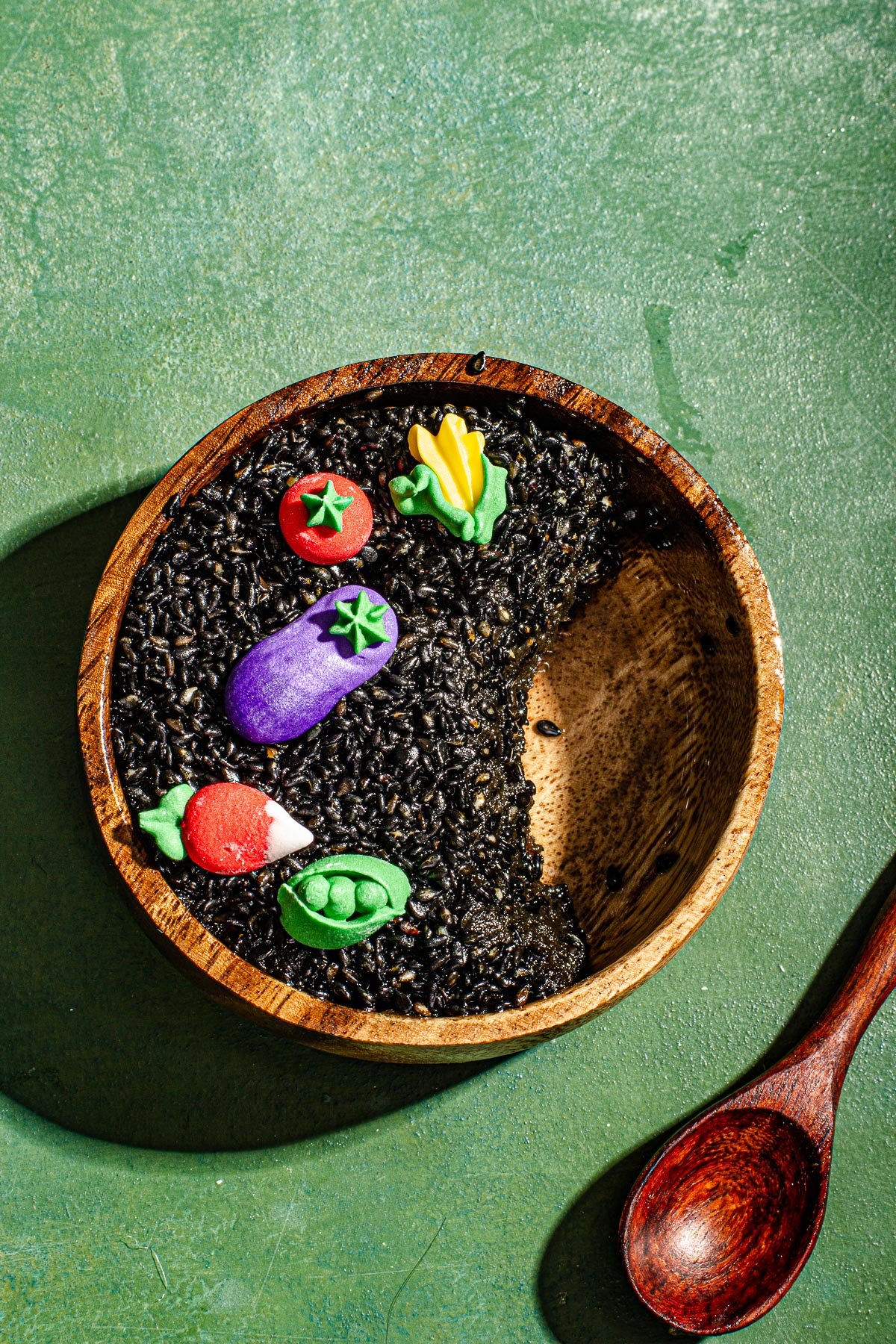 I hope you all enjoyed the Bahay Kubo Series as much as I did!  It helped me become more creative with the recipes that you see on here.  If you have an idea for what series I should do next let me know!  Write me an email!  hi@rezelkealoha.com.

All The Bahay Kubo Recipes